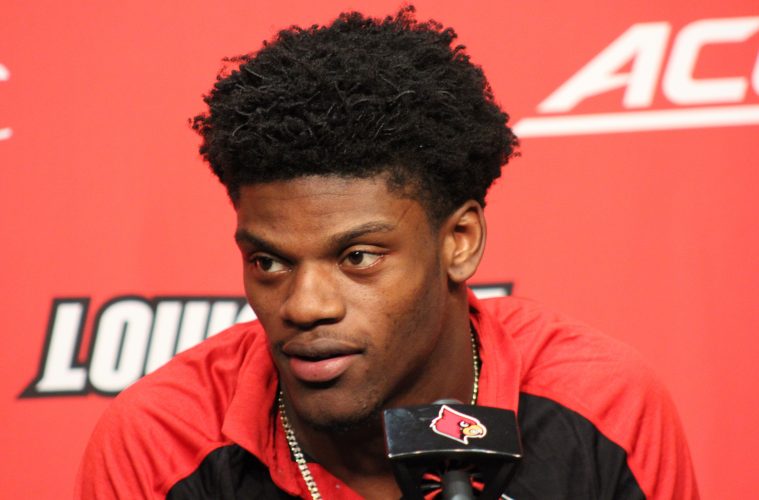 Lamar Jackson ACC Player of the Year by League Coaches

After winning the league’s top two awards last week in a vote by the media, University of Louisville quarterback Lamar Jackson swept the Atlantic Coast Conference Awardson Thursday in a vote by the 14 league head coaches.

Leading the Cardinals to a 7-1 league mark, the coaches honored Jackson as the league’s Player and Offensive Player of the Year in the ACC this season. The sophomore signal caller was also the league’s first-team quarterback.

A finalist for the Maxwell, Manning, and O’Brien awards, Jackson shattered Louisville’s single-season record for rushing yards in a season, and his eight 100-yard rushing games also broke a school mark.

The Pompano Beach, Fla., native, Jackson has passed for 3,390 yards and 30 touchdowns and is two scores shy of breaking Teddy Bridgewater’s single-season mark. Jackson totaled a pair of 400-yard passing games this season: a career-best 417 yards in a win on the road at Marshall on Sept. 24, and 411 yards in a victory at Syracuse on Sept. 9.

A Fort Worth, Texas, native, Fields, who started 11 games at outside linebacker, was credited with 42 tackles and was second on the team with 5.0 sacks. Fields was named the ACC Defensive Lineman of the Week after his performance against Wake Forest, totaling 4.0 tackles for loss and 3.0 sacks in a 44-12 win.

Hikutini, a semifinalist for the Mackey Award, finished the regular season with 49 receptions for 656 yards from his tight end spot, with a team-best eight touchdowns. The Sacramento, Calif., native recorded two 100-yard receiving games, including a career-best 118 yards versus NC State on Oct. 22.

Capping the regular season in the top 10 in interceptions, Alexander recorded a career-best five picks this year – picking off multiple passes in a loss to Clemson on Oct. 1 and a win over Virginia on Oct. 29.

Despite missing two games with an injury, Harvey-Clemons tied for fourth on the team in tackles with 61 and added a pair of sacks. He posted a season-high 11 tackles in consecutive games versus Marshall and Clemson. Williams, the other starting safety, was third on the squad with 66 tackles and was second on the team with three interceptions.

A Louisville native, Quick totaled a career-high 42 receptions for 688 yards and six touchdowns. He totaled two 100-yard games, recording 108 yards in a win at Syracuse and followed that performance with 122 yards in a 63-20 victory over Florida State.

Christian, who started all 12 games at offensive tackle, and Mahoni, a starter in 12 contests at guard, have been key figures on offense, helping the Cardinals lead the nation in scoring offense at 45.3 points per game. The team ranked second in total offense at 558.8 yards per game, while setting a school record with 3,081 rushing yards.

Anchoring the middle of the defense, Brown, a starter in all 12 games, recorded 37 tackles and a team-high 12.0 tackles for loss, while also notching 3.0 sacks.

In his third season as a starter, Kelsey leads the team with 81 tackles, and registered five or more tackles in all five games. He enters the postseason with 299 career tackles, while Williams was third on the squad with 66 tackles and was second on the team with three interceptions.

Radcliff was second on the squad with 877 yards and six touchdowns – posting four 100-yard games, including a career-high 156 yards in a win over Syracuse, while Hughley, who was an All-ACC academic selection, started all 12 games at center.

The Cardinals will return to action on Dec. 31 at 11 a.m. in the 2016 Buffalo Wild Wings Citrus Bowl in Orlando, Fla.

Player of the Year

Rookie of the Year

Offensive Rookie of the Year

Defensive Rookie of the Year

Coach of the Year