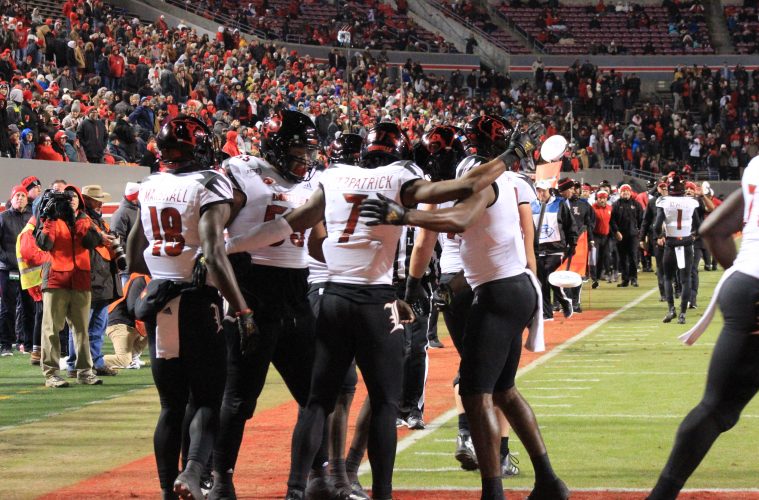 Rewind the clock to August and you’ll find plenty of talk about a possible 10-win Syracuse team that’s second in the ACC preseason power rankings. Right alongside you’d find prognostications of a recovering Louisville team that couldn’t be expected to grab anything more than three or four wins. And yet here we sit, on the raggedy edge of bowl season with the Orange coming to Cardinal Stadium as nine point dogs to the Cards.

Normally you’d think you had enough problems if you had to live your life as a giant, anthropomorphic citrus fruit. But for Dino Babers the positives and negatives of the Krebs cycle are of the least concern in a season that may prove to be the most disappointing since 1993. Firing a defensive coordinator mid-season is never a good sign but hope yet remains. After dropping four straight, the Orange waltzed into Durham to hand the Blue Devils a 49-6 butt whoopin’ that keeps their bowl bid chances alive. The question remains, was the Duke stomping an anomaly or the sign of a resurgent Syracuse?

The short answer is, no, Syracuse is probably not resurgent. A much vaunted 2018 defense crashed hard and led to the departure of DC Brian Ward in favor of Stan Stanard. It certainly looked like that made a difference as the Orange held Duke to just two field goals and 279 yards punctuated with by a string of back-to-back-to-back takeaways. Where injuries had been a nagging bug it appears that Dino Babers has his squad back to nearly fully strength and the return of senior DT McKinley Williams was noticeable in the win over the Blue Devils.

The shock value of a 49-6 win coupled with the string of four consecutive losses has served to put lipstick on the pig that is the Syracuse season. Duke, despite opinions to the contrary, is not a daunting opponent and now sits at 2-4 with a defense and offense ranked in the bottom half of the ACC in all categories. While adjustments and the dismissal of Ward may certainly have an impact, it’s more likely that Louisville will face much the Orange team as they’ve seen on film.

When defending, the Cardinals will face a Syracuse team that sits in the bottom three of the ACC statistically. That fact was belied by the stunning performance in Raleigh last Saturday and has led to much discussion regarding the state of the Orange offense. An offensive line that had been porous (42 sacks in the first nine games) found new strength with a swap between left tackle and center. Whether thanks to that or Duke’s inept defense the result was a newly effective run game that gave the Orange 286 yards and four touchdowns. Senior RB Moe Neal will take most of the handoffs and will likely also be the target of short screens as the team’s third-leading receiver. But with more than twice the rushing yards of the next two rushers combined it’s safe to say the Cardinals will know their assignment.

From Dino Baber’s perspective the resurgent run game must have been quite a relief. R-So. QB Tommy DeVito looks good on paper, with the third longest streak of zero interceptions in the FBS. But most of that is thanks to a consistent contribution of handoffs and short passes. Youth and inexperience hamper his performance, but for the Orange offense it’s more important to have a Steady Eddy under center. Pressure won’t be as effective as in other cases since DeVito’s assignment is generally to get rid of the ball as quickly as possible. The Cardinals corners and backs will have to be on their game to limit things across the middle to hold things down.

Now is not the time to take the foot off the gas pedal, and the Cardinals know that. The chance to win out for an 8-4 season and possible Citrus Bowl bid is ripe for the picking. Funnily enough the first step towards that is to squeeze the Orange. Besides victory, another juicy highlight for Saturday will be the likely attainment of all-time top rushing freshman honors by Javian Hawkins.

The last time the Cardinals played Syracuse it led to Bobby Petrino’s ouster. Two years before that a poor Orange man’s soul was ousted from his body by the likely 2019-2020 NFL MVP. On Saturday, the Cards can crush any remaining bowl hopes for Syracuse and take one more step towards securing coach of the year honors for Scott Satterfield.