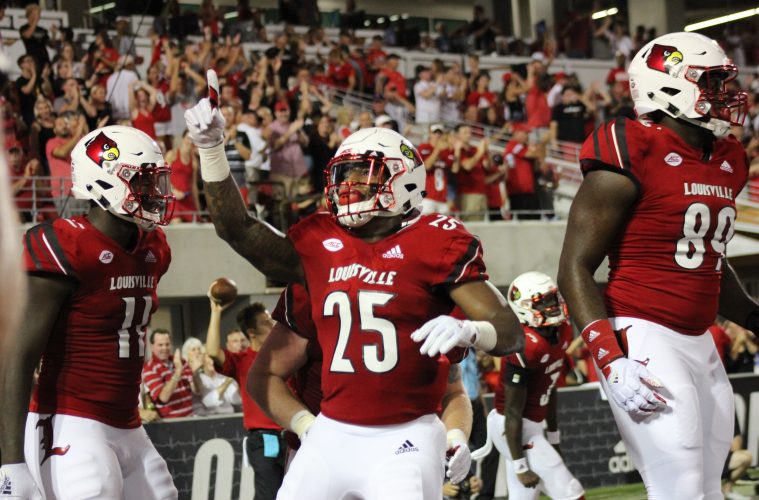 Biscuit’s 5 Keys To Victory vs. Virginia

Hey everybody. Biscuit’s (that’s me) Keys to the Game are back this week after a short hiatus. I didn’t want to write the same article three times, since the Cards still have many of the same questions they had before the first snap of the 2018 season. But now that conference play is upon us, it’s time to examine the keys to a win over our first ACC opponent, Virginia.
The Cavaliers have been an issue for Louisville ever since our first meeting as conference mates back in 2014. Even though the Cards hold a 3-1 series advantage, three out of the four games have been decided by one score, with the only decisive victory coming last season at Cardinal Stadium. Bronco Mendenhall is in his third season with UVA, and they are looking to turn a corner.

KEYS TO THE GAME

1. Fast Start: I feel like a broken record, but this team has been plagued by slow, unimpressive starts this season, especially on offense. They sputter on the first few drives, can’t keep their defense off the field, and it all eventually snowballs into a team-wide issue. Some of the trademarks of Bobby’s first tenure at Louisville (and subsequent gigs) were a well prepared team and a meticulously formed game plan. It was almost a given that Bobby’s offense was going to get the ball first and score. His scripts were famous, and his teams executed them to perfection. This season the Cards’ offense is responsible for 3 first half points. THREE. The lone first half TD was a Rodjay Burns punt return against Indiana State.
This year’s team seems to come out unfocused and unprepared, and you can’t help but pin that mostly on the staff. The Cards have to score in the first quarter, preferably the first drive to seize momentum and prevent Virginia from setting the tone and tempo. This is a conference road game, not a home game against an over-matched FCS opponent. If the Cards allow UVA to get a two touchdown lead early in the game, they aren’t giving it back.

2. 3rd Downs: This one is so frustrating. We have had issues getting the other team’s offense off the field the entire second Petrino tenure, and this season has been no different. The Cards rank 116th in the FBS allowing an abysmal 46.9% conversion rate on 3rd downs. That’s DAMN NEAR HALF. This has to get better. Period. Third down conversions, especially long ones, are back-breakers. They crush the defense’s spirit and momentum. To boot, UVA ranks 13th in the nation on offensive 3rd down conversion rate. Watch this battle closely.

3. 3rd Downs, Part Deux: On the other side of the ball, the picture is not much prettier. If it feels like we are going three and out a lot this season, it’s because we absolutely are. We rank 119th in the FBS in offensive 3rd down conversion rate. As a team, Louisville is successfully converting on less than 30% of their third down opportunities. A few factors: our inability to establish the run, drops, and our drive-killing penalties. We have turned many a 2nd and 10 into a 2nd and 15, and several 3rd and 2s into 3rd and 7 with a false start or an illegal substitution. Clean it up, convert the third downs, and keep your defense on the sideline.

4. Establish a Running Game: I’m not sitting here screaming for Bobby 1.0, but there has to be a middle ground between “Feed The Studs” and going long stretches without acknowledging the existence of your running backs. If for no other reason than to keep the defense honest, you have to establish the running game. Dae Williams showed flashes of his feature back potential last season, and continued to do so last week. He deserves more than 9 carries. This becomes even more important with a young, mobile quarterback that defenses will be keying on. Besides, Dae is a battering ram. Get him going downhill.
In addition to the read option, I thought the offense looked best running a zone blocking scheme. Both of Dae’s big runs came on zone plays, as he did a great job letting the play develop in front him, finding his seam, and hitting it. One cut and go.

5. Contain Bryce Perkins: Easier said than done. Perkins has been a dynamic weapon for the Cavaliers the first three weeks of the season. He has allowed Bronco Mendenhall to employ more read option into his playbook, which he used to great effect the first two games of the season. Perkins amassed more than 100 yards rushing against both Richmond and Indiana, before Ohio used a zone scheme to try to limit his effectiveness. He responded by throwing for nearly 400 yards. The defensive line and linebackers must maintain lane discipline and contain against Perkins. The defensive backs must be aware, and cannot quit on coverage against a QB who can extend the play. It’s a big week for a banged up defensive unit.

– Second verse, same as the first. I will be watching the offensive line. I am curious how the unit responds to a full week working with Malik as the starter. As you ALL know, I was bullish on this unit all off-season, and still believe they have the potential to be very good. But one of the reasons I felt that way was the chemistry they’d built up as a unit over the last 12 months. As of today, only Mekhi Becton is still starting at the position at which he ended the summer. That’s not ideal. I actually thought they did OK in pass pro (with some notable exceptions), but were constantly beat across the face, and were often driven into the play. It’s time to flip that script.
– The injury situation. Dorian Etheridge is listed as the starter this week, and hopefully he is full go. Robert Hicks played fairly well in his stead last week, but the steady hand and scheme knowledge Etheridge possesses are key to the defense. Also monitoring Dee Smith.
– The receivers. The quarterbacks need some help, fellas. This unit has the most raw ability on the field, and we’ve seen them perform at a high level. Time to put up or shut up, fellas.
– Tutu Atwell. Get my man some more touches in space.
– Rodjay Burns. It feels good to have a returner back there who is a threat to house it every time he touches the ball. I feel like we were cheated out of prime Jaire the returner last season. Time for prime Rodjay.
– Jared Goldwire, Jarrett Jackson, Robert Hicks, Tresean Smith, and a handful of others who stepped up on defense last week. I still have serious reservations about the scheme. There are holes that are easily exploited, and too many receivers just get lost, but the defense put in a serious effort to squeak out that win against WKU. None of us liked that they had to, but I’m glad they did. UVA’s offense looks far more competent than recent years. In addition to Perkins, running back Jordan Ellis looks like a north-south bruiser. The defense will need another big effort.
– Jawon Pass. I’ll be watching the young man’s demeanor. While he didn’t play great (and made an egregious error that led to his latest benching), Puma got little to no help from his teammates last Saturday. Drops have been a disease. He looked dejected at times after being benched for Malik Cunningham. I hope to see him engaged and ready to play, as there is a good chance he sees the field at some point on Saturday.
– I’ll be counting the exact number of UVA fans I see in a tucked in polo/button up with rolled up sleeves, short shorts, boat shoes, sunglasses with croakies, and visors. I think I’ll make it a drinking game. Drink every time one is spotted. Let’s call it “Biscuit gets his stomach pumped before halftime” (I will not be playing this game and damn it neither should you)

Hell, I don’t know anymore. My head is telling me that UVA is playing well enough, they have a dynamic quarterback, and UofL has shown no indication that they are poised to improve. But my heart is telling me there’s no way in hell the Cards are actually this bad…

Another one score game. Louisville’s offense benefits from a full week with Malik Cunningham as the starter, and so does Malik. The Cards squeak this one out and head home to face the Noles.