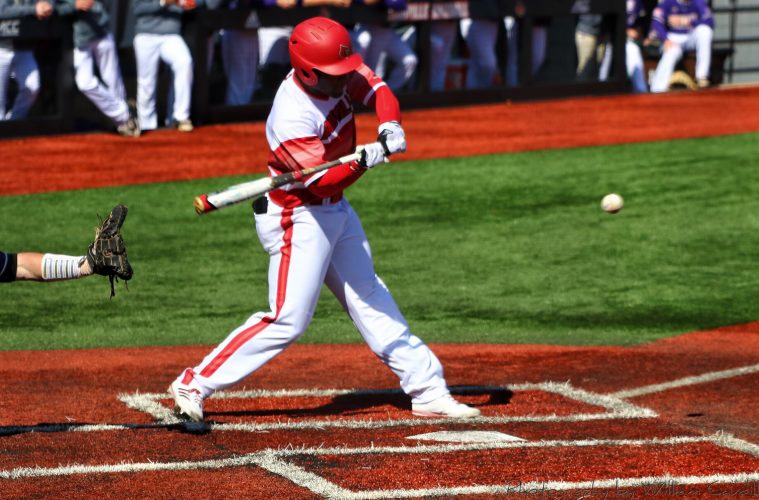 Traveling to Winston-Salem, NC to take on the Wake Forest Demon Deacons (9-11) in their first road conference series of the season, the #4 Louisville Cardinals (16-4) dropped  the series by losing the first and last games, their first ACC road series loss since April 2016 when they lost 2 of 3 to Boston College in Chestnut Hill. The Cards faced marquee starting pitchers in all three matches, failing to score more than 3 runs in both losses in the series.

Louisville’s next action will come against the Western Kentucky Hilltoppers (9-10) in a midweek game on Tuesday at 6:30pm at Bowling Green, KY.

In a home opening series that was dominated by starting pitching, the Demon Deacons but a bow on Griffin Roberts’ 8.1 inning masterpiece and walked off the Cardinal Nine in the ninth inning off a solo home run over the right field wall, 2-1.

Having a great game of his own, junior left-hander Adam Wolf made yet another Friday start and gave Louisville as good of an opportunity as ever to keep them in the game. In his 6 inning start, he only allowed 1 run off 6 hits and 3 walks, while simultaneously setting a new career personal best with 11 strikeouts.

Even though Wolf was wheeling and dealing from the mound, the starting lineup had a hard time catching up with him. During his 6 innings in the game, the Cards only mustered 3 hits in that stretch. However in the top of the seventh just before graduate transfer right-hander Austin Conway would relive Wolf, Louisville would finally break through and get on the board off outfielder Drew Campbell’s first collegiate home run.

Finally tallying a run for the Cards to make it 1-1 would not deter Wake Forest, as Roberts would continue to deal from the mound. Louisville threatened in the top of the ninth to finally get him knocked out of the game, but the could not finish. The Demon Deacons would succeed where the Cards failed, as a home run given up by Conway in the bottom of the ninth would force Louisville to walk off the field.

Facing another great Wake Forest starting pitcher, the Cards mounted an impressive comeback rally and scored the final 9 runs of the ballgame to even the series with Wake Forest at one game a piece, 11-6. Once down by 4 runs, Louisville ended up winning by more runs than their largest deficit faced in the contest.

Making just his second start of the season, sophomore right-hander Shay Smiddy quickly found out that despite having a losing record, Wake Forest is still a solid team. The Deacs got off to a very hot start, plating 4 runs in the just the first inning alone, including a leadoff homer. Finding themselves in a familiar situation with facing an early deficit, the Cardinal Nine began to chip into the lead held by Wake Forest, including a bases loaded single in the second inning by sophomore shortstop Tyler Fitzgerald and a sacrifice fly in the third by junior second baseman Devin Mann.

Wake Forest would respond with 2 runs of their own, pushing their lead to 6-2 in the bottom of the third that would spell the end of Smiddy’s day on the mound. Junior right-hander Bryan Hoeing would help pick up the slack in the fourth inning and begin a bullpen scoreless inning streak for the Cards.

Down 4 runs, the fifth inning would finally mark when Louisville’s bats would come alive. Tyler Fitzgerald and junior outfielder Josh Stowers would drive in back-to-back solo shots to pull within 2 runs, then back-to-back walks by sophomore infielder Jake Snider and Devin Mann followed by back-to-back singles by sophomore first baseman Logan Wyatt and sophomore third baseman Justin Lavey would bring home 3 more runs and put Louisville ahead for the first time in the series.

With attaining their first lead in the series, the Louisville bullpen was determined to not let this one slip away from them. Hoeing would take his scoreless streak into the seventh inning, and sophomore left-hander Nick Bennett would help him finish the seventh after racking up the pitch count.

Still clinging to a 1 run lead, the Cardinal Nine got themselves some much needed insurance runs to relieve the pressure in the ninth inning. They’d rack up 4 more runs thanks to a wild pitch, a Devin Mann double, and back-to-back bases loaded walks by freshman infielder Lucas Dunn and sophomore outfielder Ethan Stringer to make it 11-6. Helping shut the door on the Demon Deacons, junior right-hander Sam Bordner, who had made a rare closing entrance in the eight inning, was able to record the final 6 outs and secure the series tying win.

In the Sunday rubber match against the Wake Forest Demon Deacons, Louisville found themselves in yet another early inning deficit thanks to a first inning grand slam, and this time the deficit proved to be too much as they fell 6-3 to lose the series.

Securing the 3 spot in the pitching rotation for the weekend series, junior right-hander Riley Thompson made his way to the mound for his 5th start of the season. Like the game prior, Wake Forest wasted little time putting on a show for their home crowd. Wake Forest proceeded to load the bases and launch a deep grand slam over the left field wall with no outs in the game.

Having a slight rebound with a scoreless second inning, his total pitches logged on the game had grown too high and warranted Coach Mac having to go to the bullpen in the third. Through the next three innings, senior left hander Rabon Martin would keep the Deacs off the scoreboard in some much needed scoreless innings. During this time, Louisville began yet another comeback attempt, starting with a groundout RBI by sophomore outfielder Danny Oriente in the fourth inning to make it 4-1.

Louisville might have experience with clawing back from early deficits, but Wake Forest was determined to not repeat yesterday’s results. When freshman left-hander Reid Detmers took over the mound in the sixth inning, the Demon Deacons took advantage of the pitching change as well as a passed ball to plate two more runs. This would knock Detmers out after just 0.2 innings, forcing Coach Mac to bring in freshman righty Bobby Miller to finish out the inning.

After the sixth inning jam, Miller’s 2.1 scoreless innings gave the Louisville pitching staff some much needed zeros on the board. The Cards also plated one run each in the seventh and eighth thanks to a RBI groundout by Justin Lavey and and RBI triple by Devin Mann respectively. Unfortunately, these combined efforts were not enough to over come the deficit they faced, and the Cardinal Nine dropped the game 6-3, as well as the series 2-1.