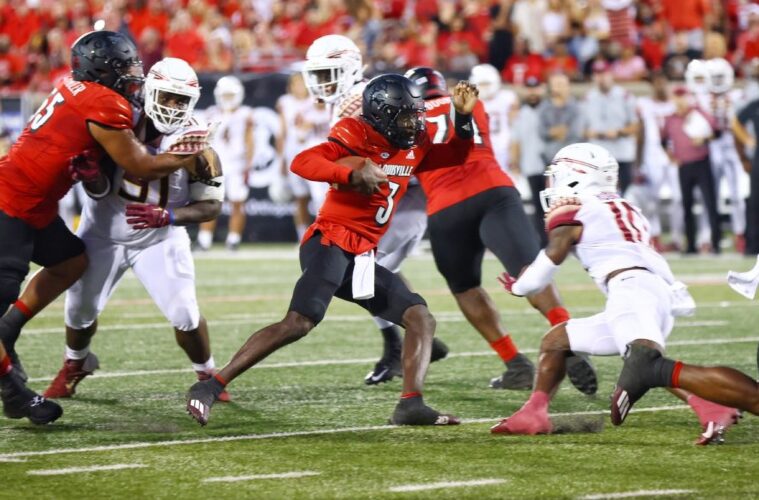 Cardinals fans had many questions coming in to Friday’s home opener. Was the Syracuse game a fluke? Is LSU good or bad? How good is Jordan Travis. How long will it take me to get to my seat, and will I be able to send tweets and videos once I get there?

At least on the WiFi front, things seem to be working beautifully. Traffic issues could be attributed to Churchill Downs, Bourbon and Beyond, and a Friday night contest. Security was, per reports, a drastically improved experience. Ticket scanning was improved, but with some lingering hiccups.

That’s off the field. On the field the only question was who was going to score last. Unfortunately for Card Nation it was the Seminoles who stole a heartbreaker from the Cardinals 35-31.

FSU won the toss and deferred, but Louisville’s first drive ended in a punt. The Seminoles did not hesitate and drove 61 yards in 2:17 capped by a Jordan Travis to Preston Daniel TD to make it 7-0 in favor of FSU.

That woke up the Cards who responded with a seven play, 75 yard advance capped by a Malik Cunningham eight yard rushing touchdown to even things up. Throughout much of the first half the back and forth swing featured FSU gaining chunk yardage on minimal plays while the Cardinals answered with workmanlike long marches.

A Malik Cunningham to Trevion Cooley TD pass put the Cards up 14-7 after a seven play, 80 yard advance. But the Seminoles evened things up with a well targeted pass from Jordan Travis to Malik McClain in the corner of the end zone.

Louisville’s ground attack found numerous gaps that were well exploited, while FSU’s offensive trickery seemed to fool the Cardinals’ defense with ease. Both teams were clearly trying to keep their respective feet on the gas pedal, with seeming success. But a fast-paced offensive first quarter devolved to a slow second quarter where mistakes from both teams began to multiply.

Fortunately the Cardinals found their footing about two-thirds of the way through Q2. A shanked FSU punt put the ball on the Seminoles’ 33 yard line, but a hold pushed things back to the 43. From there, Malik Cunningham captained a six play, 43 yards drive capped by two Trevion Cooley rush attempts. On the first he stumbled, on the second he scored and the Cards moved back in front 21-14.

The Seminoles, however, continued finding ways to make mistakes. One in particular cost them dearly. A Jordan Travis attempt to get rid of the football placed it right in Yasir Abdullah’s hands. But more impactful was the fact that Travis immediately went to the ground in pain. While the play was overturned, Travis’ knee having been ruled down, the FSU QB was slowly led off the field in the direction of the rear area imaging room.

Despite a Cardinal opportunity drawn from a Tate Rodeman gift-wrapped interception for Yasir Abdullah the first half would end quietly with the Cards still in front 21-14. Jordan Travis did emerge from the rear areas as the second half got underway, but did so wearing a boot on his left foot and walking with crutches. Yet once again Tate Rodeman showed little fear or caution. Florida State evened things up with a 10 play, 75 yard drive in 6:02 and the score sat at 21-21.

Meanwhile the Louisville offense had sputtered. The last drive of the first half and the first two of the second half all resulted in punts, while the second to last drive of Q3 ended with a fumble. But as the third quarter ended the spark of life returned courtesy of a Malik Cunningham 43 yard run. The momentum carried into the fourth quarter as Malik slipped two tackles for an 18 yard rushing TD to make it 28-21.

But again Rodemaker would prove his mettle. Three plays, 75 yards over 1:01 featuring a 69 yard bomb to Johnny Wilson capped by a 10 yard crossing route TD and once again things were knotted.

Malik Cunningham wasn’t going to let that stand. A 55 yard rainbow to Ahmari Huggins-Bruce once again put the Cards within striking distance. But the Cards couldn’t find the end zone and settled for a James Turner 36 yard field goal to make it 31-28.

The Seminoles would not squander the opportunity and once again put it to a Louisville defense that was increasingly porous. Eight plays in 75 yards ate 3:51 from the clock while a Rodemaker pass to Wilson in the corner made it 35-31 in favor of the Seminoles.

The Louisville drive ending in a FG felt like the first slip in an otherwise back and forth slugfest. It had been Louisville’s game to lose and they were doing everything to make that a reality. The ensuing drive found the Cards going for it on 4th & 2, only to have Malik’s pass to Tyler Hudson broken up.

The UofL defense did stiffen somewhat, holding FSU to a field goal attempt that once again went wide. Satterfield had saved his timeouts and put them to use in the classic two minute (or less) drill. A fourth down passing conversion kept hopes alive, but Malik’s next pass was rushed and intercepted by FSU to put the nail in the coffin.

Numbers wise this was a relatively even affair. But UofL’s ground attack had its way with the FSU frontline throughout much of the contest. The same frontline that had given LSU so much trouble. Rushing yards were assuredly a key, and a notable improvement over the UCF game was the Cards’ red zone performance.

But FSU’s rushing game in the second half proved equally as difficult for the Cards to handle. Combine this with an unintimidated air attack from Tate Rodemaker and the Louisville defense was on its heels. A defense that proved poised and confident against UCF in the second half at Orlando now seemed jittered and unsure.

Chalk this one up to squandered opportunities. Louisville’s offense stepped up, but the defense could not hold off the Seminoles. Even without Jordan Travis the FSU offense found a new nemesis in Rodemaker to Wilson.

The Cardinals get a week and a day off to lick their wounds before returning to Cardinal Stadium to face the South Florida Bulls.