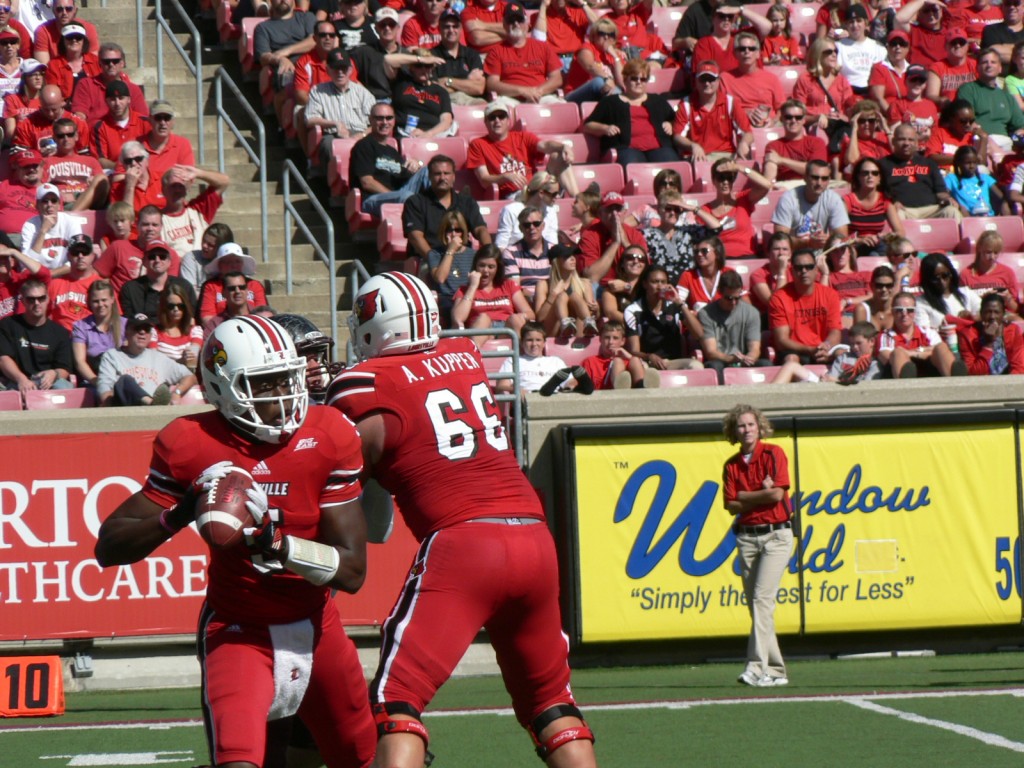 Today we introduce to you a new feature that we will be running on a weekly basis here at TheCrunchZone. Throughout the preseason and into the regular season we will be taking a look at how all the former Cardinals are fairing in the NFL. In this, the first edition, we take a look at where all of the former Louisville standouts are on their respective teams depth charts, along with what type of season they are expected to have.

Eric Wood – C Buffalo Bills: Eric is coming into his 5th year as a starting offensive lineman for Buffalo, but only his 2nd season as the Bills starting Center after beginning his career at Right Guard. He has started all 47 games that he has played and is definitely Buffalo’s centerpiece of their offensive line. Wood became the Bills first 1st round draft pick from Louisville when he was drafted 28th overall in 2009.

Andrell Smith – WR Miami Dolphins: Andrell went undrafted after a stellar senior season this past fall, but recently signed with his hometown Dolphins on July 28th. Smith is currently listed as Miami’s fourth string slot receiver, but with Armon Binns going down with a season ending injury this past weekend, there is an opportunity for Smith to show what he can do this preseason. If Andrell can play like we know he is capable of, then the Dolphins may just give him a chance of earning a Practice Squad spot or maybe even keep him on the 53 man roster to begin the season.

Bilal Powell – RB New York Jets: Bilal is entering his 3rd season as a New York Jet and is looking to pick up where he left off at the end of his sophomore campaign. Powell rushed for 437 yards and 4 touchdowns as the Jets just couldn’t find any QB stability at all in 2012. It is currently unclear where Bilal is on the Jets depth chart due the open competition the Jets have implemented this offseason. But I believe with Shonn Greene moving onto the Tennessee Titans, Powell will be given every opportunity to win the starting Running Back job for the Jets. I expect a breakout season this year for Bilal!

Elvis Dumervil – LB Baltimore Ravens: This past offseason Elvis wanted to resign and remain a Denver Bronco, but when his former agent didn’t fax his papers to the organization until after the deadline had passed, he had to look elsewhere. With the loss of Ray Lewis to retirement and Jarrett Johnson to the San Diego Chargers, the fit with the Ravens is perfect for Dumervil and the team locked him up right away. Elvis is now in his 8th year in the NFL and despite missing the entire 2010 campaign with injury, he has totaled 63.5 sacks in the league.

Chris Johnson – CB Baltimore Ravens: Johnson may be forgotten by many Cardinal fans now in his 10th NFL season in the league, because Chris didn’t start much during his time in Louisville playing under John L. Smith. With this being Johnson’s 2nd season as a backup defensive back for the Ravens, I look for him to make contributions to their special teams, as well as in dime packages on defense.

Gary Barnidge – TE Cleveland Browns: After spending his first 5 years in the NFL with the Carolina Panthers, Barnidge signed a lucrative free agent contract with the Browns this off-season. Gary started 5 of the Panthers games in 2012 and had 6 catches for 78 yards and 1 touchdown. Cleveland currently has Barnidge as the teams 2nd Tight End behind Kellen Davis. I expect Gary to have a monster year, provided he stays healthy and the Browns get good Quarterback play from Brandon Weeden.

Brock Bolen – FB Cleveland Browns: After being out of football for all of 2012, Brock has found a preseason home in Cleveland. Bolen has played 20 NFL games, all of which he has played for the Jacksonville Jaguars. He was mainly used on special teams and as a reserve Fullback. With Bolen being the only other Fullback behind starter Owen Marecic on Cleveland’s roster, it may be a very good spot for him to gain a roster spot back in the NFL.

William Gay – CB Pittsburgh Steelers: After playing his first 5 seasons with the Steelers, Gay signed a free agent contract with the Arizona Cardinals in the spring of 2012. But after a sub-par season in Arizona, William was released and decided to return to his roots and sign back with the Steelers. Gay is currently listed as Pittsburgh’s 3rd Cornerback, otherwise known as the Nickel Corner. He will be returning to familiar surroundings and I believe a return to form, as well.

Alex Kupper – G Houston Texans: Kupper went undrafted this past spring, but found a home in Houston during the undrafted free agent signing period. With many quality offensive lineman ahead of Alex, it will be a success for him to stick with the Texans practice squad for his first professional season. Hard work and determination can help Kupper maintain his status in the NFL.

Jason Spitz – G Jacksonville Jaguars: Jason is currently in his 8th NFL season, and his 3rd with the Jaguars. He has been oft-injured since signing with Jacksonville in the spring of 2011 and didn’t play at all last year. Spitz has 75 NFL games under his belt, while starting 45. If Jason can regain his health, he will only help the Jags offensive line depth.

Byron Stingily – OT Tennessee Titans: Byron is in his 3rd season playing Right Tackle with the Tennessee Titans. He is 2nd on the Titans depth chart and provides stability with the ability to play any offensive line position if needed.

Josh Bellamy – WR Kansas City Chiefs: Josh is now entering his 2nd NFL season with the Kansas City Chiefs, playing mainly special teams for the Chiefs. The buzz this summer is that Josh could be a real breakout performer and I would suggest you keep one eye on what he does in the preseason. If Bellamy plays as well as everyone is saying he is doing during training camp, then watch out this fall.  The Chiefs need other options at WR opposite of Dwayne Bowe.

Johnny Patrick – CB San Diego Chargers: Patrick spent his first 2 NFL seasons with the New Orleans Saints, but he was caught in a numbers crunch there and was ultimately released. Johnny wasn’t on the market long as he signed with San Diego the very next day. Patrick looks like he will be a contributor right away on special teams, but he will have to earn his playing time on the defense this preseason.

Michael Bush – RB Chicago Bears: Michael is now entering his 7th season in the NFL and his 2nd with the Bears. Bush has his lowest season yardage total since his first playing season in 2008 with the Raiders. With his pass catching ability out of the backfield, I feel like the Bears and their new coach Marc Trestman will be able to utilize Michael better than his first season in the Windy City. I truly believe that Michael will have a breakout type year for the Bears this fall.

David Akers – K Detriot Lions: Entering his 14th new season, Akers will be with a new team. After spending the last 2 seasons with the San Francisco 49ers, David will replace legendary Kicker Jason Hanson with the Lions. Last season, Akers tied the NFL record for longest field goal made with his 63 yarder against the Green Bay Packers in Week 1. As long as David shows consistency during the preseason, he should be in good shape with the Lions.

Harry Douglas – WR Atlanta Falcons: After being drafted in the 3rd round (84th overall) by his hometown team in the spring of 2008, Harry has fully entrenched himself as the Falcons number 3 Wide Receiver, behind only Roddy White and Julio Jones. Atlanta likes to utilize Douglas as the slot receiver and with the monsters on the outside, it opens up a lot of room for him in the middle of the field. I fully expect Harry to have his best year as a Falcon this fall.

Breno Giacomini – OT Seattle Seahawks: Breno is entering his 6th NFL season and his 4th with the Seahawks. In 2011, Breno entrenched himself as the starting Right Tackle and he hasn’t shown any signs of letting that go anytime soon. I’d imagine the 6’7″ 320 pound behemoth will continue to protect Russell Wilson for many years to come.

Greg Scruggs – DE Seattle Seahawks: After a solid rookie season in 2012 for the Seahawks, Scruggs was dealt a devastating blow this offseason when it was announced that he had tore his ACL in his right knee. Towards the middle of last season, Greg played the best he had all year by registering he only 2 sacks of his season in Week 7 and 9. Greg is the only player from Louisville to be drafted by Seattle. I look for Scruggs to return to pre-injury form in 2014.

At this time, these are the only former Louisville Cardinals who are currently on NFL rosters. When we have another former player sign with an NFL team, they will then be promptly added to the next weekly update. If you, the reader, see that a former player has signed on with a team and you want to let me know about it, then please don’t hesitate to shoot me a link through Twitter or email. I hope you all have enjoyed the first installment of the Cardinal Update: NFL and we will see you again after Week 1 of the Preseason. And as always, Go Cards!

Born in Louisville and raised a diehard Cardinals fan. I have been a football season ticket holder for 6 years, but I just so happen to live in Florida. My day job is as a teacher/coach and I love that, but at the same time Louisville athletics are a part of my everyday life. I previously covered high school athletics for the Santa Rosa County (FL) Press Gazette, as well as doing Florida high school and junior college radio play-by-play for Panhandle Sports Broadcasting. Follow me on Twitter: @ragg514