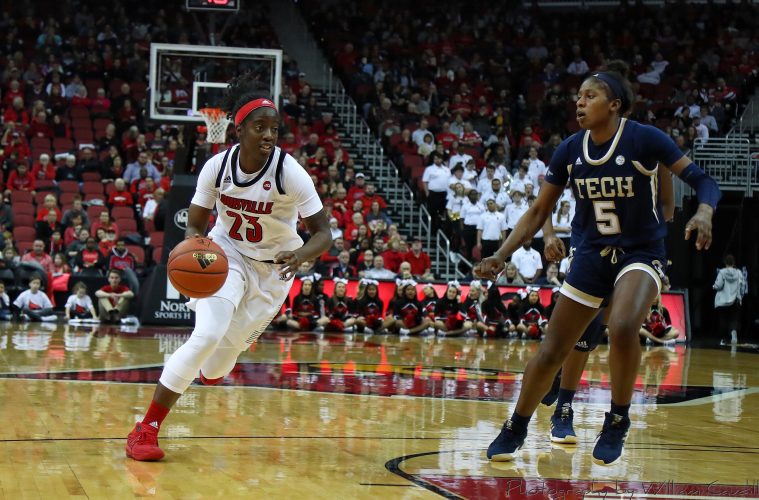 As March approaches, now’s the time and the time is now to sharpen a team’s focus and bring a full head of steam into post-season play. A sub-60 performance for a team that averages 74 a game might not be what you’d call a full head of steam, but for the first time this season the Cards got it done on less than 60 points to defeat the Ramblin’ Wreck 58-47 in Atlanta.

Things began, as they so often do, with a hot start for the Cardinals. A 9-0 Louisville run drew a timeout from Tech head coach Nell Fortner after just 3:30 into the game as the Yellow Jackets looked to reset. A stiff Louisville defense was weakened somewhat as Elizabeth Balogun headed to the bench after stepping awkwardly on Francesca Pan’s foot. Tech was able to immediately put together a 6-0 run but Yacine Diop replaced Balogun with gusto and hit a big three to snatch back momentum.

Fortunately Balogun was back in for the second quarter, but unfortunately that would not be the first time a Cardinal headed to the bench with a stress-inducing ankle twist. And despite Balogun’s return the Yellow Jackets managed a 6-0 run to draw within a point before Dana Evans was able to get the Louisville offense rolling again. Despite their best effort, each Tech run was answered with a more impressive one from Louisville. The Cards managed another 9-0 run and finished the half with a 10 point lead courtesy of a beauty of a jumper off a set piece.

For the Cardinals the first half was a classic display of the triple threat, with Shook moving in the middle, Evans hitting from distance, and Jazmine Jones doing Jazmine Jones things with excellent dribble penetration. From a defensive perspective the strategy was simple, and readily apparent. All of Tech’s losses had come when leading scorer Francesca Pan was held to less than 10 points. On Thursday, if Pan touched the ball she immediately had two Cardinals defenders in her face. The strategy was undoubtedly successful as Pan was held to five points while Jeff Walz was content to let any other Tech player do their best to compensate.

For the Yellow Jackets, no savior was forthcoming. Tech only managed 1 of 12 from three point range and 30% shooting with just 17 made baskets out of 57 attempts. Only center Nerea Hermosa and guard Lotta-Maj Lahtihnen managed double figures while Jeff Walz could be heard constantly screaming at his defenders to not leave Pan alone at any time. Even with Tech managing 14 offensive rebounds (nearly half their total) the additional opportunities simply did not pay off.

That does not, however, mean that offensive woes were limited to the Yellow Jackets. Halftime adjustments revealed a Georgia Tech defense able to match Louisville’s tenacity, and the third quarter began with a nearly four minute cold stretch for both teams. For a time it was only a Jaz Jones’ three pointer on the Q3 score sheet for the Cards while Tech did manage to capitalize on several Louisville turnovers for an 8-0 run.

Dana Evans was able to quiet McCamish Pavilion with an impressive deep three point basket, but it came at a cost. Tech’s Lahtinen stepped out to put a hand in Evan’s face but also managed to step beneath her. Evans, echoing Balogun’s earlier scare, came down on Lahtinen’s foot and immediately went to the floor grasping her left ankle. While she was able to walk off the court putting weight on her injured ankle, she was clearly still wincing in pain.

Much to the relief of Cardinals fans, Evans did return in the fourth quarter. Smartly, however, she did return to the bench for additional care (most notably ice on her left ankle) as the clock wound down and the Cardinals seemed to have things well in hand. Throughout the ordeal, Louisville’s offense demonstrated just how much depth has developed in the back court this season as Jones, Robinson, and Diop effortlessly meshed to lead the Cards to victory.

While the offensive woes (or defensive prowess) continue for both squads, the advantage from the first half placed the game squarely in Louisville’s hands. Tech did manage a late run but it wasn’t enough and the Cards cruised to victory number 24 despite a stretch in Q4 where they were 1 of 9 from the field. One particular negative was Louisville’s total of 14 turnovers, many of which contributed to Tech’s sporadic runs.

Kudos to Kylee Shook for another impressive double-double on 13 points and 13 rebounds in addition to four of Louisville’s eight blocks. Elizabeth Balogun joined in on the stuffing action with three of her own. Jaz Jones led all scorers with 18 points, and credit to her for playing a smart final 15 minutes as she was called back in with three fouls after Evans’ injury. While three Cards finished in double figures (Evans being the third) the Louisville tally of 58 marked their first sub-60 win on the season. The loss to Ohio State was on exactly 60 points while the Florida State and Syracuse losses featured 59 and 51 points respectively.

The Cards remain in the driver’s seat with just three games to go in the regular season. What should be a sleeper at Pitt on Sunday will be followed by two final games at the KFC Yum! Center, the first of which features a Boston College team that gave Louisville some fits up in Chestnut Hill.

All eyes will be on the ankle of Dana Evans, with a distinct possibility that Jeff Walz will choose to sit her on Sunday at Pitt as a precautionary measure. As for now she’ll be a priority for the Louisville training staff.