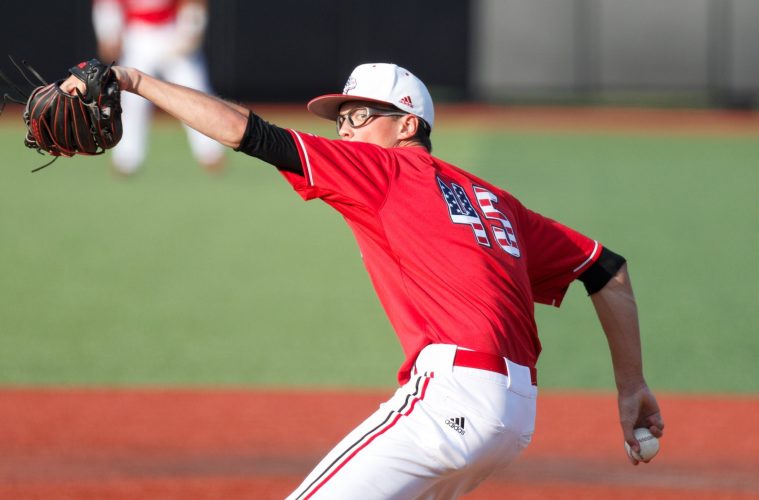 Playing for their postseason lives, the #7 Louisville Cardinals (46-16) had a complete performance against the Illinois State Redbirds (36-25), dominating them from start to finish en route to an 11-1 thumping. Louisville’s offense broke out of their postseason mini-slump, jumping in front early and putting their foot on the gas late. But the main catalyst behind the victory was a gutsy performance from starting pitcher from Luke Smith, as he tossed 129 total pitches and went 8.1 innings deep.

Unlike their first matchup against the Redbirds, the Cardinal Nine got off to a much faster start at the plate. Outfielder Drew Campbell and second baseman Justin Lavey would set the tone early, with the juniors each plating a run in the second. Campbell’s would come courtesy of the sacrifice fly for his 32nd RBI of the season, and Lavey’s on a base hit up the middle immediately after him.

Illinois State would cut Louisville’s deficit to just 1 in the bottom of the inning, but the offense would get a lot more explosive shortly after. The Cards would put up a 3-spot in the fourth, all thanks to tremendous extra base hits. Jumping on the second pitch of the at-bat, junior outfielder Jake Snider launched his first home run of the season deep into right field to lead off the the fourth inning. Later in the inning with two outs, sophomore Lucas Dunn delivered in the clutch by sending a ball deep into the right field corner next to the bullpen, allowing a pair of runners to come home off the RBI triple and make it a 4 run game.

As the game progressed through the middle innings, Luke Smith started to settle in and was in an absolute groove on the mound. Getting his first start since April 16th vs. Kentucky, the junior right-hander made the most of it as he set a new career long outing, as well as tossing 6 consecutive scoreless innings after his earned run in the second inning.

Aiding Smith’s effort’s down the stretch, the Louisville offense added some much needed insurance runs to make a potential Illinois State rally as difficult as possible. The Cardinal Nine would go through the entire batting order in the eighth inning en route to putting up a 6-spot for their highest scoring inning in the postseason. Danny Oriente, Drew Campbell & Zach Britton would collect RBI singles, Tyler Fitzgerald would get in on the RBI parade with a sacrifice fly, and Jake Snider could cap the inning off with a bases loaded 2 RBI single.

Taking to the mound to start the bottom of the ninth with a double digit run lead, all Luke Smith had to do was finish strong like he had done all afternoon. Surrendering a balk after a triple from ISU’s Joe Aeilts, Coach Mac was forced to go to the pen and bring in Carter Lohman. The freshman left-hander channeled his inner Smith, striking out the only two batters he faced to end the game.

The victory set up a regional final against the Redbirds tomorrow at 1pm down at Jim Patterson Stadium. It will be broadcast on 93.9 The Ville and televised on ESPN3. The winner will advance to the Super Regionals to face the winner of the Greenville, NC Regional.