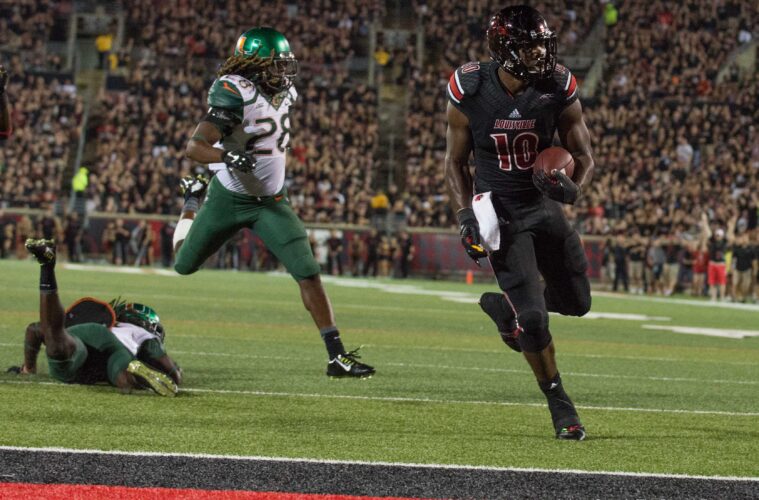 Louisville running back Dominique Brown got the start on Saturday against South Florida and he delivered. Louisville (7-1, 3-1) did what they were expected to do against South Florida (2-5, 2-1), crushing them to the tune of 34-3. The Louisville defense rebounded after last weeks disappointment, only giving up 133 yards. Teddy Bridgewater was stellar completing 25 of 29 passes for 344 yards and 3 touchdowns.  It’s what he does.

However, Dominique Brown may have put together the most impressive performance on Saturday.

“It helped getting the start, getting the momentum, getting my blood flowing,” Brown explained after the win. “It was a great experience. I had to stay humble throughout the whole process. When I got my opportunity, I went out there and did what I had to do.”

The Junior from Cincinnati finished with a season high in carries and a career-high in rushing yards, finishing with 125 yards on 18 carries. Additionally he was also a threat through the air, catching 6 passes for 61 yards and a touchdown. His 186 All-Purpose yards accounted for 38% of Louisville’s 485 offensive yards. That’s quite a feat for a player who was listed third on the depth chart five weeks ago.

“He has that toughness to him,” Louisville Head Coach Charlie Strong said following the win. “He runs the ball so hard. He made a big one handed catch. He runs hard and does a good job of catching the ball.”

Through most of the season, it appeared to be a three-prone attack in the backfield between Senorise Perry, Michael Dyer, and Dominique Brown. Ideally, there would be a feature back, although last year worked out great with a 2 back set with Wright and Perry.  It seems the running back line up could be taking shape for the home stretch, and Brown appears solid in the 1 position.

Did Saturday’s victory over South Florida show us the future? Michael Dyer, who most thought would have found a major role in the offense at this point, didn’t receive a carry. Unknown is the reason, but he appeared healthy and ready to go. Junior Senorise Perry received 13 carries for a pedestrian 35 yards.

While Brown has appeared to make his claim at the one spot, the two spot would appear to be up for grabs. The coaching staff may have revealed their hand, showing the course to be Option ‘A’ Dominique Brown, Option ‘B’ Senorise Perry.

If the staff had doubts in Brown’s ability to step up, he squashed those today. He was efficient, physical and turned troubled plays into positive gains. Offensive Coordinator Shawn Watson noted that if Brown ‘stayed hot, we’d continue to go with him’. Well, he’s done that.

Don’t expect this surge to stop anytime soon. Brown appears to be the man now, and he’s deserved everything currently coming his way.