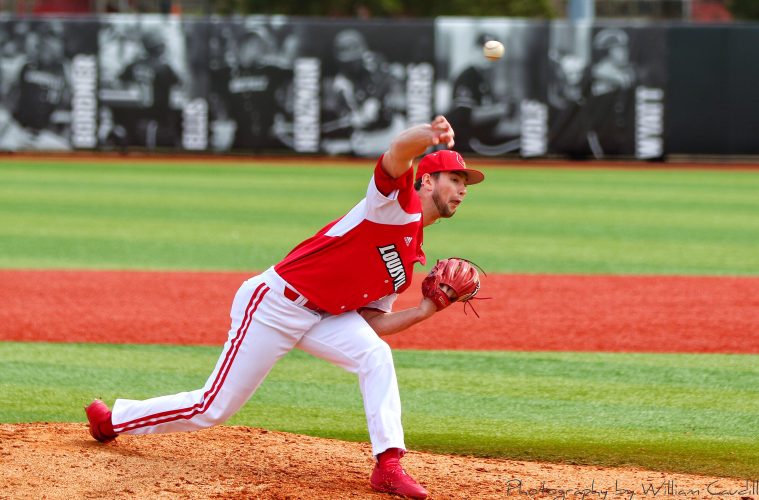 Fresh off of their two game sweep of #7 Ole Miss, the #7 Louisville Cardinals (16-4, 5-1) traveled to Durham, NC for their first true road trip of the season against the Duke Blue Devils (12-8, 2-4). The teams did battle at Durham Bulls Athletic Park, home of the AAA Tampa Bay Rays’ affiliate Durham Bulls, where the Cards swept the Blue Devils in a three game weekend series.

Louisville helped down the Devils by taking advantage of an abnormal amount of errors committed by the home team. Duke committed 8 errors over the three games, allowing Louisville to plate 18 runs on 28 hits, and only trailed in 4.2 innings out of 27.0 innings played. Pitching was also solid over a majority of the weekend, with the pitching staff only allowing 7 earned runs with striking out 32 batters & walking only 7.

Another Friday night on the diamond meant another spectacular outing from Reid Detmers and the rest of the Louisville Cardinals, as the visiting squad took game 1 in the weekend series vs. Duke, 8-3. On top of striking out a combined 14 batters over 3 pitchers, Louisville also notched double digit hits for the 8th time this season.

Being the visiting team, the Cardinal Nine took to the plate first and quickly established their dominance over the home Blue Devils. With two outs and runners on the corners, second baseman Jared Poland and center fielder Drew Campbell would connect for back-to-back RBI base hits to jump out to an early 2-0 lead. Poland would then plate the inning’s third run after a bases loaded wild pitch allowed all base runners to advance a base.

Although back-to-back doubles in his first two batters faced surrendered his first earned run since his very first outing in 2019, starting pitcher Reid Detmers had yet another brilliant start. The sophomore southpaw bounced back for the remainder of the game, allowing no additional runs and striking out 9 over 6.0 innings of work on the mound. By the time he exited the contest, he would tally 50 strikeouts on the season, along with a season ERA of 0.53.

After Duke’s first run in the opening frame, the Cards responded by going on a 5-0 run. Campbell would notch another RBI base hit in the 3rd, moving him into a tie for second on the team in RBIs with 13 (Tyler Fitzgerald – 19). Later in the fifth inning with two runners in scoring position and 1 out, freshman catcher Henry Davis scrapped together a run however he could with an RBI groundout to give Louisville 5 runs in game 1.

The sixth inning featured Louisville’s only other crooked number inning, as outfielder Ethan Stringer lead off the inning by drilling a ball over the Blue Monster for his first home run in 2019. Shortstop Tyler Fitzgerald would single to land on base, with first baseman Logan Wyatt sending him to second off a single of his own. Fitzgerald would steal third, then a throwing error by the catcher would allow him to come all the way home and complete Louisville’s scoring efforts.

With Detmers exiting the game after 114 pitches thrown, Duke would take advantage of the pitching change and jump all over newly inserted pitcher Garrett Schmeltz. The freshman lefty gave up 3 extra base hits in just 0.2 innings on the mound, allowing Duke to quickly plate 2 runs in an attempt to get back into the game. Coach Mac would call to the bullpen and go with another freshman, this time inserting right-hander Jack Perkins. He would do a much better job at fending off the Blue Devils, striking out 4 and not allowing anymore runs for the rest of the game to secure the 5-run win.

In a less than clean game played by both sides, Louisville took just enough advantage of Duke’s 4 errors committed on the game and took the Blue Devils down 2-1 in a game that had a combined 16 strikeouts. This series clinching victory marked Louisville’s 4th win this week against top 25 competition.

Anchoring the #2 spot in the pitching rotation, junior left-hander Nick Bennett had a good but not great starting outing. While he allowed 6 hits and a walk and only struck out 4 batters, he got stronger as the game progressed into the later innings much like Detmers had the day before. His only earned run came in the fourth inning, and he retired the last 7 batters he faced.

The Cardinal Nine scored in the first inning for the 12th time this season thanks to a wild pitch from the Blue Devils, but other than that they were left dazed and confused at the plate for the most part. Louisville’s hitters were 1-9 with two outs, 1-8 with runners in scoring position, and 1-12 with runners on base.

The one hit in all three of these instances all came from just one at-bat in the eighth inning. With two outs in the eighth and the threat of extra innings looming, sophomore catcher/right fielder Zach Britton demonstrated once again how clutch he truly is. He connected on Louisville’s only RBI base hit of the game to put the Cards up for good. Britton is currently batting .500 on the season with runners in scoring position.

Clinging to a 1 run lead, junior reliever Michael McAvene displayed just as clutch of a moment as Britton had. Entering the game in the eighth for a two inning save situation, he went 6-up, 6-down against the Blue Devils including striking out 4. This gave him his first save of the season and his third of his career.

Thanks to 7 unanswered runs in the sixth and seventh innings, the Cards completed their three game weekend sweep of the #24 Duke Blue Devils with an 8-6 victory that saw most of their offensive production come from their freshman. Second baseman Jared Poland would match his career high of 2 RBI as well as hit his first career home run, and catcher Henry Davis would set a new career high in RBI with 3.

Like the other 2 games in this series, Louisville jumped out to an early lead in the opening frame. With a runner on third, All-American junior first baseman Logan Wyatt mustered all he could in his opening at-bat with an RBI groundout up the middle. This would give Wyatt his 10th RBI of the season, making him the fourth Cardinal so far this season to register double digit RBIs.

It might have taken until game 3 with the series already lost for the Blue Devils, but that didn’t stop them from playing for pride’s sake with a little assistance from some ill-advised Louisville pitches and defense. The bottom of the first saw an HBP, an error, a passed ball, a wild pitch, 2 walks and 2 RBI base hits to plate 3 runs for Duke for their first lead of the entire series.

The Blue Devils would wind up chasing starting pitcher Bryan Hoeing out of the game in the third inning, as yet another error committed and a walk with no outs would prompt Coach Mac to make an early pitching change. Junior lefty Adam Elliott would answer the call to the bullpen, and only allow 1 additional run to come across for Duke with consecutive groundouts and a strikeout.

Louisville was able to get the bases loaded in the third inning with two out for a chance at closing the gap against the Blue Devils, but a short stretch of over-aggressiveness and border-line impatience at the plate got a hold of them. Over Louisville’s next 9 outs, Duke would toss only 16 pitches. But the Cardinal Nine would eventually break the slump, with freshmen Henry Davis and Jared Poland launching home runs with two outs in the sixth to tie the game up at 4 runs a piece. Poland’s home run would be the first in his collegiate career, and Davis’ would be his second of the weekend.

The Cards followed up their 3-run sixth inning by doubling up against the Blue Devils with a 4-run seventh inning. Pinch runner Trey Leonard got the inning started by capitalizing on yet another throwing error by Duke’s catcher to get to third after stealing second, and then came home for the inning’s first run thanks to a passed ball. Designated hitter Danny Oriente would groundout with the bases loaded for his first RBI of the game, then catcher Henry Davis would drive a ball to left field to send home the other two runners on base to complete the 4-run inning.

After taking the ball from starting pitcher Bryan Hoeing, Adam Elliott was the definition of relief. After giving up a pair of groundouts when he took to the mound, he then retired the next 9 batters he faced, striking out 3 in the process. It wasn’t until a single and HBP with two outs in the sixth would see him chased out of the game as well. However, junior Shay Smiddy and sophomore Michael Kirian would pick up where Elliott left off, as they would combine for 5 strikeouts over 2.2 innings of relief.

Duke would make it a much closer game than intended as they came to their final two outs of the contest. Sophomore Bobby Miller would enter the game in the ninth after Kirian struck out the opening batter, and he would give up a pair of singles and a double to bring home 2 Duke base runners and cut Louisville’s lead to just 2. Fortunately this would be the only additional runs that the Blue Devils would plate, and Miller was able to help complete the sweep thanks to a strikeout and lineout.