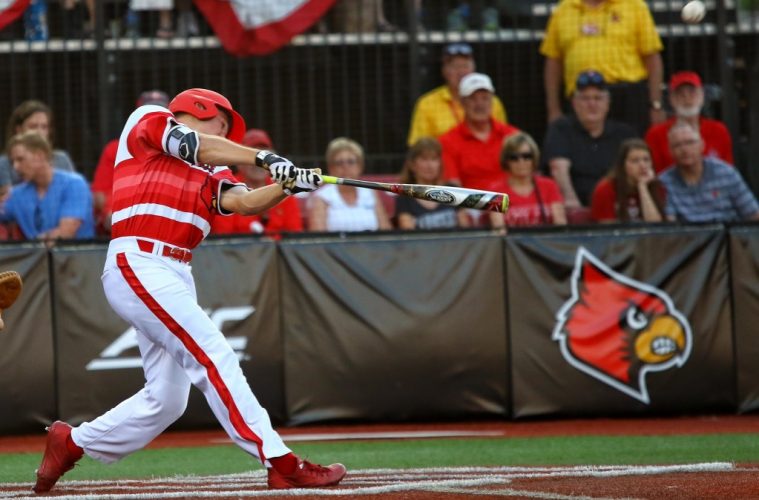 In the first action of the 2018 baseball season, the Louisville Cardinals traveled down to Charleston, South Carolina for the Charleston Crab House Challenge, where they swept the three game series against the Richmond Spiders (4-3), The Citadel (8-3) and George Mason (15-8). The Cards move to 3-0 on the season, and will play their next game on Wednesday, February 21st @ 3pm vs. Eastern Kentucky at Jim Patterson Stadium.

After being held scoreless through 8 innings, Richmond took their last chance to win and did everything in their power to try and take the game. Even though Bryan Hoeing tossed 3 perfect innings in relief, two straight 0-out singles while clinging to a 4-0 lead forced Coach Mac to go back to the bullpen and insert 5th year grad transfer Austin Conway. A single to load the bases followed by a walk would put Richmond on the board for the first time in the game. A strike out and foul out by Richmond almost spelled doom for them, but with the bases still loaded, a single by DJ Lee would plate two more runner to bring the Spiders within 1. Dan McDonnell would have to go back to the bullpen again and bring in All-American reliever Sam Bordner to finally record the final out and secure the win for the Cards.

Prior to the ninth inning drama, junior pitcher Adam Wolf made his first ever collegiate start on the mound, and was able to record a respectable 7 strikeouts to 2 walks. Over his 5 innings logged, he also was able give up only 3 hits. Not bad for his first ever start. On the other side of the plate, Devin Mann set the example offensively for the rest of the team, as he went 3-4 with a HR and 3 RBI. Also of note, on the first pitch of his first ever collegiate at-bat, sophomore Ethan Stringer delivered big-time, as he hit a solo HR in the second inning. Junior outfielder Josh Stowers also showed off his wheels, going 1-2 on stolen base attempts, helping Devin Mann drive in an RBI on his lone successful attempt.

28 years ago, Coach Dan McDonnell and current Citadel head coach Tony Skole led the Bulldogs to a berth in the 1990 College World Series. Fast forward to the present day, Coach Skole and The Citadel honored Coach Mac for his time in Charleston, SC before they squared off as rivals. The contest had a tad less drama than the game before, as the Cardinals were able to cruise to a relatively easy 8-3 victory against The Citadel.

The game marked the second in a row where a Cardinal made his first collegiate start, as junior righty Riley Thompson took to the mound to begin the game. He had a solid outing, as he was able to keep The Citadel off the board in the first four innings of the contest. In those innings, first baseman Logan Wyatt, who is filling pretty big shoes in the wake of Brendan McKay leaving for the majors, got to work as he went 2-2 with 2 RBI and a walk in the first five innings as the away team.

When Riley Thompson got back to work in the bottom of the fifth, an HBP, single, walk, sacrifice fly and another walk would plate the first runner for The Citadel and cut the lead to 4-1. This would also be the end of his afternoon as former freshman All-American Nick Bennett would come in to finish the fifth inning without any more damage.

Over the next two innings while Nick Bennett would be keeping The Citadel at bay, the Cardinal Nine would continue to increase their lead, especially in the 6th inning. There Louisville would bring home three more runners: one via a bases loaded walk by Jake Snider, another from a Devin Mann sacrifice fly, and the last one of the inning from a throwing error by The Citadel that brought home Josh Stowers. The 8th inning would continue Logan Wyatt’s career day, as his second walk of the day came with the bases loaded and would get him a career single-game best of 3 RBI.

After Shay Smiddy would come in relief of Nick Bennett in the 8th inning and toss the scoreless inning, in a strange turn of events, the game would be called in the top of the ninth inning due too heavy fog obstructing the view of the players. Although the Cards had brought home three more runs in the ninth, due to calling the game while the inning was in progress, official scoring reverted back to the end of the eight inning.

In a game that tested the Cards’ mettle early in the season, the Cards were able to overcome a 6-0 deficit after the first inning and stormed back to defeat George Mason in the final game of the Charleston Crab House Challenge in a high scoring affair.

Going with the theme of this weekend, this was the third game in a row in which a Cardinal pitcher made their first collegiate start. This time it was junior right-hander Liam Jenkins’ turn, however this first time start would be one to forget. He walked 3 of his first 4 batters, with the 3rd walk coming with the bases loaded. After a sacrifice fly brought home another runner, he proceeded to give up a 3 run homer to outfielder Scott Morgan. Coach Mac decided he had seen enough out of Jenkins, and decided to insert senior lefty Rabon Martin, where he was only able to give up one additional run before the end of the inning.

The Cards weren’t about to give up though, as in just the very next inning, they rallied back and scored 5 runs. A Justin Lavey double drove home 1 runner with Zach Britton on third, and a Drew Campbell triple brough both of them home to make it 6-3. Tyler Fitzgerald sacrifice flied to bring Campbell home, and after Josh Stowers walked and continued to show his speed by stealing second base, Jake Snider singled up the left side to bring him home and make it 6-5.

George Mason tried to put some distance between them and Louisville by scoring 1 more run in the 3rd, but a Devin Mann RBI single in the 4th assured that the Cards still had some fight in them and kept the deficit to 1. By the 6th inning, team captain Josh Stowers drove home Drew Campbell after he had reached second from drawing a walk then a balk, making it 7-7 after the 6th inning.

While pitching was certainly not the order of the day in the first inning, the Louisville bullpen did a solid job making sure the game did not completely escape from them. Rabon Martin pitched a scoreless second inning after getting out of the first inning jam, Reid Detmers struck out 7 while only allowing 4 walks and 1 hit in the next three innings, and Bobby Miller pitched a scoreless 6th through 8th innings while striking out 5 and allowing no walks.

The Cards got back to their stellar form in the final three innings, as they poured it on George Mason. They broke the 7-7 tie in the 7th inning when Devin Mann was HBP, and George Mason committed two errors on a single play to bring him all the way home with Logan Wyatt at the plate. With Wyatt and Ethan Stringer on base, a Justin Lavey RBI groundout, Campbell RBI ground-rule double and Tyler Fitzgerald RBI single extended their lead to 11-7 by the end of the 7th.

Freshman backup catcher Zach Britton brought home two more runners in the 8th inning to keep putting George Mason in the rear view mirror, and the Cards still weren’t done yet. In the 9th inning after the Patriots loaded the bases on three straight HBPs, Devin Mann seized the opportunity with an RBI single that plated two more runners to make it 15-7.

Freshman lefty Michael Kirian was tasked with closing duties, and although George Mason was able to make it interesting by loading the bases and scoring a run, he was able to close the door on the Patriots with 2 strikeouts in the 9th. When everything was said and done, the Louisville Cardinals went on a 15-2 run after giving up 6 runs in the first inning alone. Drew Campbell and Devin Mann led the offensive charge with 3 RBI a piece, with Jake Snider also going 3-4 on the day with an RBI.