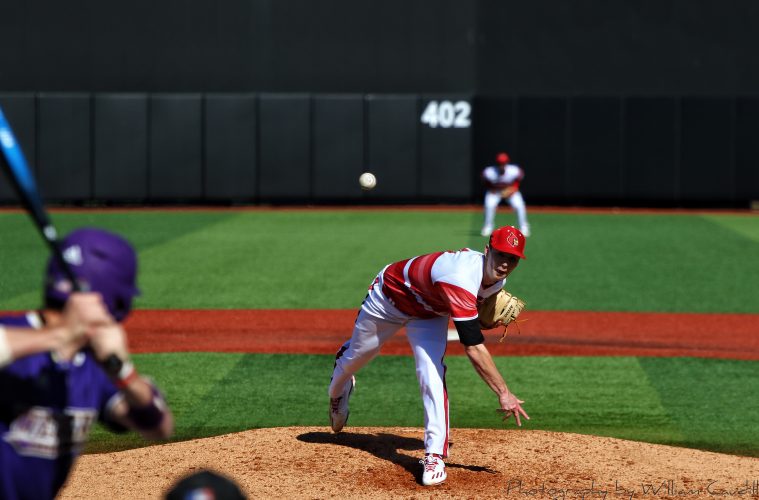 Heading down to Tallahassee, FL for a tough road series against the #5 Florida State Seminoles (22-7, 6-4), the #18 Louisville Cardinals (19-8, 5-7) continued their conference woes as they dropped the three game series for their third consecutive conference series loss. Subpar base running and questionable defense had plagued the Cards throughout the series, and they are now 4-9 against Florida State since joining the ACC in 2015. Louisville has also lost 8 of their last 13 games.

Thanks to a fast start in which they gave up 8 runs in the first three innings, the #18 Louisville Cardinals dropped to 3-8 all time against Florida State in the first match of their road series. The bullpen gave them a chance, but the Cardinal Nine just could not generate much late game offense.

Louisville was the first to break the scoreboard, thanks to a 2 RBI single courtesy of freshman outfielder Drew Campbell in the first inning, followed by junior catcher Pat Rumoro’s first career HR in the second inning. But Florida State was not far behind though.

Making yet another Friday start, junior left-hander Adam Wolf was quickly figured out by the Seminoles. They forced him to have his shortest outing of the season with only 2.1 inning pitched, giving up 8 hits and 3 walks. The call to the bullpen had to be made early, with fellow left-hander Rabon Martin providing some relief in the third. A couple bases loaded walks on his behalf further increased Wolf’s earned run total to 5, the most in his career.

After plating 8 runs through the first 3 innings, the Louisville pitching staff regathered themselves a bit. Rabon Martin would strike out 3 in the fourth and fifth innings, and junior right hander Liam Jenkins would strike out 4 in the sixth and seventh innings.

Unfortunately, Florida State had extended their lead to 9-3 off an infield throwing error in the fifth and the Cardinal Nine could not seem to figure out Noles starting pitcher Cole Sands. A scoreless eighth inning put up by freshman left-hander Gavin Sullivan and a solo shot by infielder Lucas Dunn in the ninth proved to be too little, too late and Florida State’s 9-4 advantage over the Cards would hold.

Despite having a 3 run eighth inning to take a 1 run lead, this would not be enough as the Seminoles would walk off the Cardinals thanks to 2 run home run in the bottom of the ninth. The loss would clinch Louisville 3rd straight conference series loss.

Unlike the game prior, both teams took a couple innings to get the scoring started. The Cardinal Nine broke through in the third thanks to an RBI sacrifice fly by junior outfielder Josh Stowers to bring home sophomore third baseman Justin Lavey. Another run would be brought home later in the inning to make it 2-0 when sophomore first baseman Logan Wyatt would walk with the bases loaded.

The Cards’ lead wouldn’t be held for long though. They opened up the game with a couple scoreless innings on behalf of starter sophomore right-hander Shay Smiddy, but the Seminoles quickly got their act together when they fell behind. They drew 3 walks off of Smiddy to load the bases, then proceeded to clear them thanks to a grand slam. Freshman lefty Reid Detmers immediately replaced him and he was able to finish the inning without allowing the Holes to plate any more runs.

Down 4-2 heading into fifth inning, Louisville was determined to string some runs together by any means necessary. They took advantage of a couple throwing errors to send Josh Stowers home and get junior second baseman Devin Mann on base. Logan Wyatt then delivered in a crucial run scoring situation and drove in a double to send send Mann home and tie up the game.

Top 5 teams don’t go down easy though, and Florida State is no exception. Once junior right-hander Bryan Hoeing made his entrance in the sixth inning, the Noles took advantage of the pitching change and fired off a two run inning to pull ahead. But Louisville wouldn’t be done just yet. A Tyler Fitzgerald double, Josh Stowers triple and Jake Snider single would all bring home runs and give the Cards a late 7-6 lead.

But Florida State was not done being a handful yet. Even the normally sure handed junior reliever Sam Bordner was bested by the Noles. Going for a two innings save, he would allow the second batter of the ninth to reach base, and blow a save for the first time in his career thanks to a 2 run walk off home run.

Trying to avoid getting swept by Florida State for the second time in as many years, a stellar performance by sophomore left-handed Nick Bennett did just that as the Cardinal Nine were able to steal the series finale in Tallahassee. The Noles were limited to just 4 hits, with the bullpen allowing zero.

Other than scoring 1 run in the fourth inning, Nick Bennett held the Seminoles scoreless through his 7.0 inning start while racking up 6 strikeouts. Graduate transfer Austin Conway twirled a scoreless eighth, and when FSU threatened in the bottom of the ninth, sophomore left-hander Adam Elliott made his entrance for the rare 5 run save situation, and was able to close the door while earning his first collegiate career save.