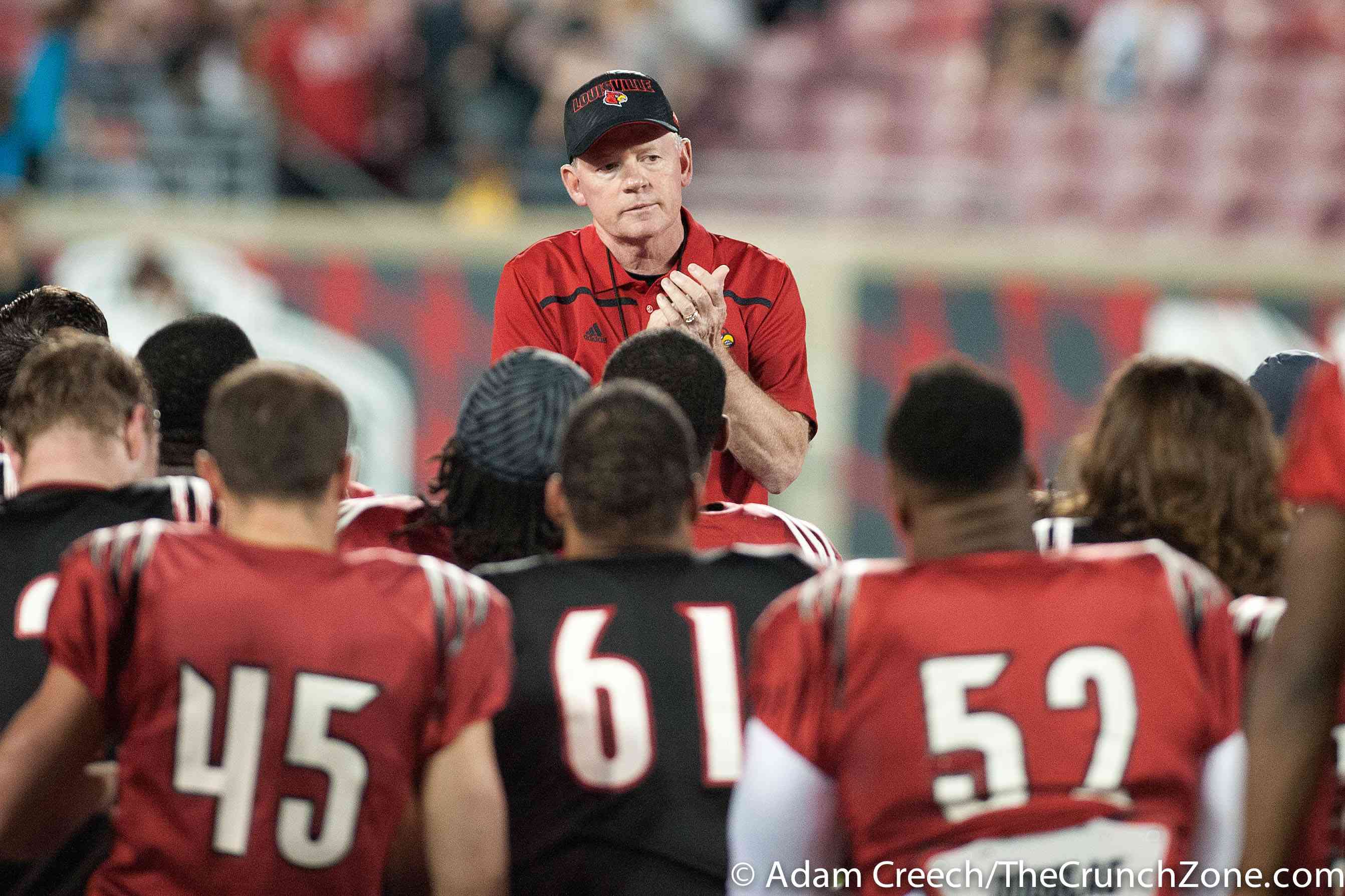 University of Louisville head football coach Bobby Petrino consistently states that his players set the depth chart – not the coaches.

On Saturday, the players had their first opportunity to stake their claim on the top of the first depth chart as the Cardinals conducted their first major scrimmage of the spring in Papa John’s Cardinal Stadium.

Running over 200 plays under sunny skies and mild tempertures, the Cardinals had their first opportunity to compete with the 1s facing off versus the 1s and the 2s against the 2s in an evenly-matched scrimmage.

“We are making progress,” defensive coordinator Brian VanGorder said following Saturday extensive scrimmage. “I think today was invaluable with the amount of work we got this morning. We will take a look at the film, but I was pleased. I think we are ascending, but we understand that it is a process.”

In the first game-like situation with his unit, VanGorder’s learned a lot about his group. The first-year coach was pleased with the number of turnovers they forced, but understands there is a long way to go to reach their goals.

“I thought our cornerbacks from the beginning have improved on some technique areas.” VanGorder said. “I think everyone has gotten better in the first couple of weeks, but we definitely want more.”

Rising sophomore Dorian Etheridge – the first player in school history to lead the team in tackles last season – has caught the eye of VanGorder this spring. Finishing with 83 tackles a year ago as a rookie, Etheridge has taken a major step forward as the leader of the defense with his ability to be more vocal and his football IQ.

“He’s running the show out there,” VanGorder said about Etheridge. “He just has a lot on his plate. I know how good he’s going to be because he’s very conscientious and he’s excited about the learning process. I think it’s going to take time, but I think he’s doing a very good job.”

There hasn’t been much of a learning curve on the offensive side of the ball in Petrino’s eight seasons. Coming off a year where they finished third in the country in total offense, the Cardinals exhibited some of the same firepower on Saturday.

Behind the arm of Jawon Pass and the running of Trey Smith, the Cardinals scored on 12 possessions, with Smith scoring once on the ground and Pass tossing three scores.

“Jawon brings his own type of game to our offense,” Smith said. “He’s a great leader, a great quarterback.”

With a number of carries up-for-grabs this spring, Smith has taken advantage of his opportunity this spring. He led the ground game on Saturday and showed an ability to break tackles and get downhill.
“There’s a lot of competition out there,” Smith said. “Our emphasis is attacking the defenders, getting down field and work off our blocks.”

It’s easy to work off the blocks with the mammoth offensive line returning four starters upfront.

“The offensive line is great and I love running behind them,” Smith said. “It’s pretty easy for me to find the holes, because the holes are huge. They are doing a great job and we know they’ll continue to get better.”

The Cardinals return to the field on Tuesday afternoon for the ninth practice of the spring in preparation for the April 14 Wendy’s Wonderful Spring Game.