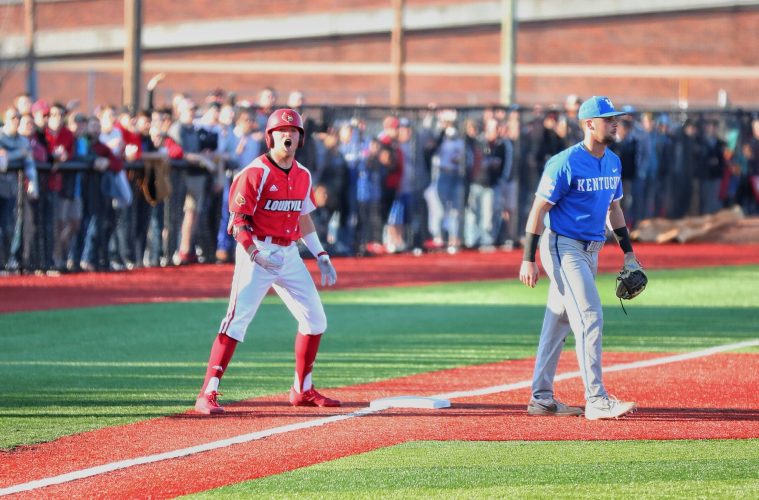 Playing in their 500th game at Jim Patterson Stadium, the #8 Louisville Cardinals (23-6. 9-3) commemorated the milestone with the annual Battle of the Bluegrass where the Cards defeated their in-state archival Kentucky Wildcats (16-13) 8-3. After going down 2-0 early, Louisville proceeded to score in four straight innings, plating 8 consecutive runs.

The first two innings of the contest flew by with neither team getting a base runner, but then the bats collectively woke up in the third inning. UK got the scoring started by plating a pair of runs off of starting Louisville pitcher junior right-hander Luke Smith, the Cardinal Nine immediately responded in the bottom of the inning. A Kentucky fielding error followed by a pair of extra base hits from juniors Ethan Stringer and Jake Snider pulled the Cards even with the Cats. Snider’s hit was his 3rd triple of the year (leads team), which bounced off the wall and very nearly cleared the park.

Once Kentucky worked Luke Smith into a no-out/two runner jam, head coach Dan McDonnell decided to make a call to the bullpen in just the fourth inning. The call paid off for Coach Mac, as newly inserted pitcher junior Adam Elliott struck out 2 of the 3 batters he faced, with the third being retired thanks to a great defensive save from preseason All-American first baseman Logan Wyatt.

Following the pitching change in the top of the fourth, the Cardinal Nine were able to triple their run total with a 4 spot in the bottom of the inning. Senior captain Zeke Pinkham broke the tie with a runners on the corners single, then junior outfielder Ethan Stringer took first base the hard way with a bases loaded HBP. With the bases still loaded, Jake Snider once again delivered with two outs on a 2 RBI single to give him 3 for the game (ties career high).

Finishing their scoring efforts for the evening, Louisville plated a run in both the fifth and sixth inning to score in 4 straight innings. Outfielder Drew Campbell delivered his 7th double of the season to bring home a runner in the fifth, with a UK fielding error in the sixth bringing home Jake Snider. By the time Kentucky plated their 3rd run of the game, the Cards had plated 8 straight.

While Adam Elliott and senior Bryan Hoeing had combined for 6 strikeouts in 4.1 innings of relief, Hoeing was chased out of the game after finding himself in 1-out/2 runner jam and surrendering UK’s first run since the third inning. But once again, Coach Mac’s call to the bullpen paid massive dividends. Newly inserted pitcher sophomore Michael Kirian struck out 2 of the 3 batters he faced and wiggled out of the jam without surrendering any more runs. He would go on to pitch the ninth inning, where he would strikeout a pair of batters and secure the victory.