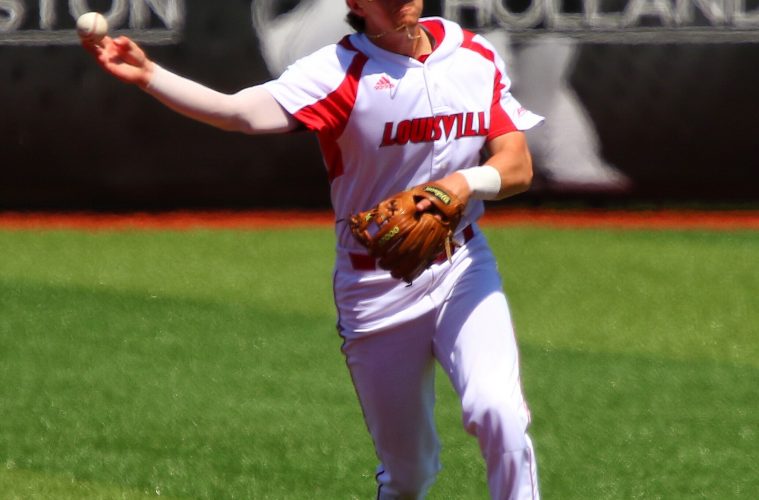 Continuing the week on the road, the #29 Louisville Cardinals (32-15) made the trip up to Brighton, MA outside Beantown to take on the Boston College Eagles (16-30) and managed to come away with a series victory, winning 2 games out of 3. In all three games Louisville got great starting pitching, with their starters going at least 7 innings deep in each game. Despite losing the final game of the series, the Cards still outscored the Eagles by a run total of 18-5.

A spectacular day on the mound from junior Adam Wolf helped the Cardinal Nine overpower the Boston College Eagles, 6-1 in the game 1 series opener. The southpaw allowed only 1 run, and gave up only 3 hits in his 8.0 inning start. Over his impressive start, Adam Wolf not only didn’t allow Boston College to crack the scoreboard in the first seven innings, but over the game he also struck out 10 batters while walking only 2.

While Wolf was keeping the Eagles at bay, Louisville got to work capitalizing on his strong pitching. Junior outfielder Josh Stowers would lead off the second inning with a solo home run into left field for the game’s first run, but after that BC would keep the Cards relatively in check. They would not score again until the 5th inning, but would put a three spot on the Eagles. With two runners on base, an RBI single by junior second baseman Devin Mann followed by 2 RBI double by Logan Wyatt that nearly cleared the wall would further push the lead to 4-0 after five innings.

Over the game, Boston College committed a whopping 5 errors, though they didn’t impact the game as much as one would think, especially down the stretch. Notably, errors didn’t play a factor when Louisville got themselves some late insurance runs, coming in the form of a 2 run home run from Drew Campbell in the eighth inning, his second of the year.

It took Boston College until the bottom of the eighth inning to plate their first run, but the  5 run deficit heading into the ninth inning would prove to be too much. Wolf would be relieved by junior right-hander Liam Jenkins and he would retire the side to close the door on the Eagles.

All Around Domination Of Eagles Clinches Series, 11-3

The Cardinal Nine left absolutely no doubt who was the better team on Saturday, as they were able to dominate the Eagles both from the mound and at the plate in an 11-3 affair in Brighton, MA. The Cards had 10 more hits than Boston College, and put up nearly four times as many runs.

The Cards wasted very little time establishing their command at the plate, as the first four batters of the contest made it safely on base. Louisville put up a three spot int he very first inning, thanks to an RBI base hit from junior second baseman Devin Mann, a bases loaded HBP from junior outfielder Josh Stowers, and then an RBI groundout from freshman outfielder Drew Campbell.

They continued the game’s trend of scoring early and often by following up the three run first inning with a four run third inning. An RBI groundout from sophomore designated hitter Danny Oriente and a sac fly from Drew Campbell would add two more runs, then third baseman Justin Lavey’s third homer of the season would bring in another two runs to make it a 7-0 game after the early innings.

Boston College wouldn’t score until the sixth inning, but not before the Cardinals had put up 9 total runs thanks to 2 more runs in the fourth inning from a Josh Stowers RBI base hit. Louisville would keep pouring on the runs, plating an additional two runs thanks to an Ethan Stringer RBI single and a Pat Rumoro sacrifice fly.

Dealing with a comfortable lead, sophomore left-hander Nick Bennett had himself another solid day on the mound. In his 7.0 inning start, while he only struck out 3 batters, he only gave up 1 earned run off just 3 hits and no walks. When his day was done and Coach Mac had to resort to the bullpen, Boston College would jump on the 2 pitching changes and put up 2 runs in the eighth. However, Mac would make a third pitching change and bring in grad transfer Austin Conway. He would finish the last two innings of the game not allowing BC to score again, and striking out 4 Eagles.

Freshman right-hander Bobby Miller continued to prove that his recent addition to the starting rotation pays off dividends with another solid starting performance. Over 7 innings of work, he struck out 4 batters while giving up only 1 earned run off 5 hits and 2 walks. Unfortunately for the Cards’ offense, during the 7 innings while Miller was on the mound they could only muster up just 1 run that came in the fifth inning off a Devin Mann RBI groundout.

Like in the game prior, Boston College pounced once Louisville’s starter was out. Junior Bryan Hoeing would give Miller some relief in the eighth inning, only to immediately give up a run. To stop the bleeding in hopes of making a ninth inning rally, he would be yanked and sophomore Adam Elliott would be tasked to record the final out of the eighth. However, there would be no comeback on the ledger today for Louisville, and the 2-1 defeat would stick.