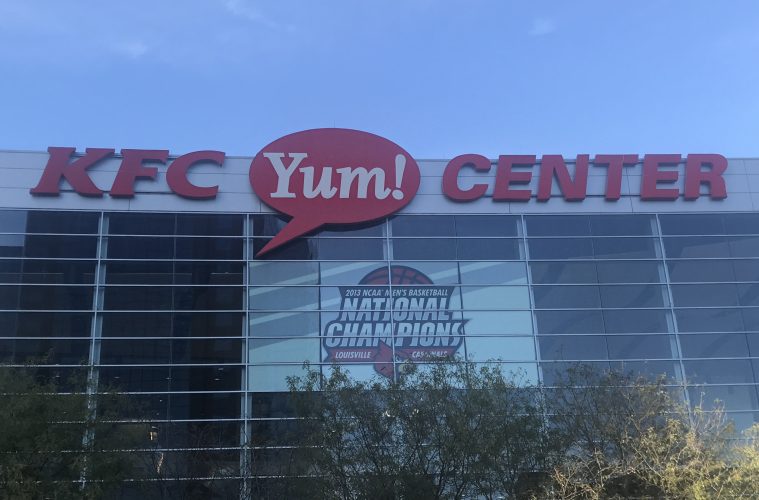 Thoughts From The Yum Center

Numb. That’s how I felt when I woke up this morning.

In shock. In disbelief. But above all, I felt numb. I still hadn’t fully processed what I had just heard from the day before. My alma mater, my team, in the midst of one scandal, had somehow found its way into the spotlight yet again for the very same reason. My first thought was that how could we be so stupid to get involved in scandal on the heels of another that isn’t even 100% over with? And yet again, those at the center gave the same reaction as before, almost as if it was scripted. Whether or not Pitino truly knew what had gone on in Las Vegas I felt that enough was enough.

As the morning went on, and the reports started to come in, I felt even more numb than when I had woke up. Not only did Pitino have full knowledge about everything this time around, but he was the one who helped orchestrate it.

I needed to feel something, other than the feeling of numbness that had come about me ever since I heard the news. I work in downtown Louisville, just a few blocks away from the KFC Yum! Center. I thought it was best to pen this reaction piece while on the steps of the arena, so that I could capture the raw emotion I was actually feeling, if I actually would end up feeling anything at all.

As soon as I stepped out of work and began walking towards the Yum! Center, I immediately began to feel sick. Like my body knew that whatever emotions awaited me just a few blocks were not going to be good ones. The entire time I was walking, I couldn’t help but hang my head down, almost like I felt ashamed.

When I finally got to the corner of 3rd and Main, and I could actually see the arena as I was waiting to cross the street, I began to well up. Slowly but surely, everything from an emotional standpoint was starting to come to a head. I walked past the designated student entrance, where I could remember the many times I had eagerly waited in line to get the best seat in the house so I could cheer on the Cards.

I could vividly remember some of the most memorable Louisville games I had ever watched, both good and bad. Not just here, but all the others I had traveled to as well. The miracle on Main Street, the 2013 Final Four, the 2014 Sweet Sixteen, all the emotional highs and lows that had been a part of my University of Louisville basketball fandom. Some of my most cherished memories revolved around Louisville athletics.

I decided to take a seat on the stairs facing the basketball fountain in front the arena. At that point, that emotional that I had not felt when I woke up this morning all came to me at once.

And I began to cry. I felt betrayed. Embarrassed. Angry. Confused.

We as fans had been lied to and deceived by Rick Pitino for all these years, all the while we were defending him as a coach and as a person. Not only that, but the mantra of “Louisville First”, the creed that Pitino himself preached as if it were gospel, had been thrown by the wayside. He was the man responsible for taking the culture of UofL Athletics and setting it on fire. We all bought into him, and we had been duped. Tom Jurich’s unwavering loyalty to him, a man who had put on a facade for everyone, probably including Jurich himself, is what ultimately was his downfall as well.

What started out as numbness had eventually turned into confusion, despair, betrayal, frustration and anger.

After the initial wave of emotion subsided, I began to think about the bigger picture. Between former president James Ramsey’s corruption, the interference of the Board of Trustees from an inept governor, the possibility of a loss of accreditation, as well as Pitino’s lies, I began to feel grief for the University as a whole.

What had happened to my alma mater? Where could we even go from here? Could the reputation of Louisville academics and athletics ever be saved? Even though I have only been a Louisville fan since I first stepped on campus in 2011, Louisville has been the only city that I have called home. I’m not alone when I say that my heart hurts for not only the program, but for the University and the city.

But as I continue to sit on the steps of the KFC Yum! Center, I’m starting to feel another emotion: hope. While there are plenty of dark days ahead as both the NCAA and FBI continue their investigation, all I know is this. Whenever it will be time to finally began healing, whenever it will be time to help pick up the pieces, I will be there. I love this city and university too much to let it flame out and die at the hands of a sociopath. As much as both Pitino and Jurich brought to the city, it’s time to move on from them and begin anew.

I don’t know what walks of life I will end up taking. I don’t know what ups and down that life has in store for me. There is one thing that I do know though. Through thick and thin, I am a Louisville Cardinal, and my heart will always reside in the 502.