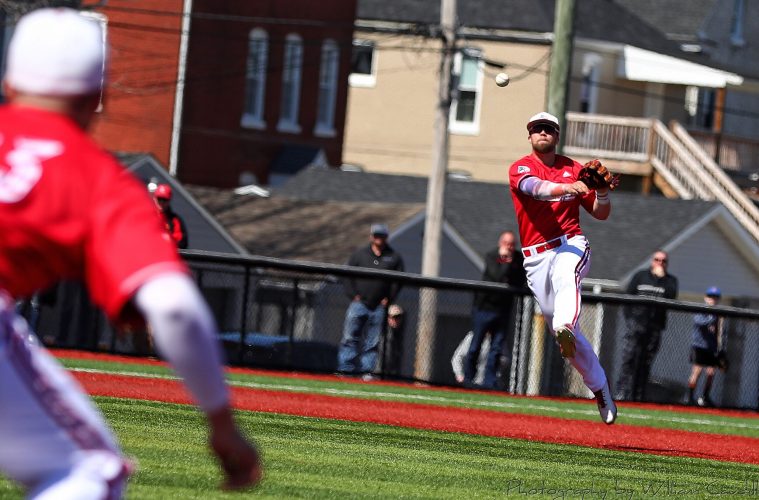 While the offense played a couple games this past week where they were moderately humbled, they still continue to fire on all cylinders. As a team, they are batting .298 which leads the ACC, and feature 9 hitters that are batting over .300 (8 of whom have played in over 25 games). Freshman Alex Binelas and juniors Tyler Fitzgerald & Logan Wyatt continue to be the catalysts for the offense as they post the 3 highest OPS numbers on the Cardinals roster, and have long established themselves as the part of the Cardinals lineup to be most-feared by opposing pitchers. Fitzgerald leads the team in total bases and RBI with 104 and 56, Wyatt is 3rd in the ACC in on base percentage at .480 & 2nd in the nation in walks with 55 (second only to consensus #1 overall 2019 MLB Draft prospect Adley Rutschman’s 59), and Binelas leads the team in home runs with 9 and is third in the ACC in OPS at 1.159. With players like Lucas Dunn, Zeke Pinkham, Zach Britton and Henry Davis helping head coach Dan McDonnell put out a loaded lineup day in and day out with the ACC Baseball Championship just around the corner, the Cardinals offense is primed to bolster Louisville’s chance at making it to Omaha for a fifth time.

On top of maintaining their status as a top 3 offensive team in the ACC, the Louisville pitching staff continues to show why they are the best in the conference. With 7 punch outs in game 1 vs. Notre Dame, Reid Detmers pulls even closer to the UofL single-season strikeout mark of 146 (currently at 120) with two more regular season starts as well as presumably an ACCBC and Regional round start. Bobby Miller & Bryan Hoeing continue to produce solid pitching outings since switching back to their original respective roles, with Miller in game 2 allowing his fewest base runners as a starter since his start against Wake Forest (3/31) and Hoeing in game 3 tossing his most strikeouts (6) since striking out 9 vs. James Madison (3/2). Michael Kirian & McAvene have established themselves as two of the best late-inning relievers in the ACC, with the duo combining for 4.0 shutout innings and 4 strikeouts in the Notre Dame series. With pitchers like Adam Elliott, Jack Perkins and Shay Smiddy also rounding into form heading into one of Louisville’s biggest games of the season, it will give the Cards a huge boost in the midweek game against the Commodores.

Coming up this week, the Cardinals will start the week by taking on the #2 Vanderbilt Commodores (38-9) in the Battle of the Barrel at Jim Patterson Stadium for the midweek game. They’ll follow that up with their final weekend road series against the Virginia Cavaliers (27-20, 10-14).

Adjusting the ticketed entry plan first featured last season, 17 of this season’s 34 home games will revert back to free entry. This week, the game against Vanderbilt will feature charged admission. Tickets for later games can be purchased here. In case you cannot make it to any of the games, all 4 games this week will be broadcast on 93.9 The Ville. The  Vanderbilt game will be televised on ESPNU with the UVA series being broadcast on ACC Network Extra.

Vanderbilt is a team that is absolutely loaded with talent at the plate. They are 18-7 against Quadrant 1 teams, having swept Auburn, Florida & Alabama while winning two out of three games against Arkansas, Tennessee and Illinois State. Their only series losses are to RPI 6th Georgia and RPI 16th Texas A&M. As a team they are batting .321/.420/.525, with 6 players batting over .300 in over 100 at-bats. 5 qualified hitters (2 PA/G and 75% of GP) have an on-base percentage of over .400, a slugging percentage over .500 and an OPS over .900. These five players (J.J. Bleday, Phillip Clarke, Austin Martin, Ethan Paul and Stephen Scott) also combine for 62% of Vanderbilt’s total RBI count. Sophomore Austin Martin carries a slash line of .429/.515/.647 and is second on the team in both walks and total bases. With as much of a threat that Martin is at the plate, he’s not even the Commodores best offensive option. Outfielder J.J. Bleday has produced an almost sure-fire All-American caliber season for Vandy. The junior has launched a Vanderbilt record 23 home runs (35% of the team total), collected 144 total bases off of a slugging percentage of .791, and carries an MVP-level OPS of 1.256. In a midweek game where pitching is typically an afterthought, the scoreboard has a real chance at seeing an unreal amount of runs combined with Louisville other-worldly offense.

On the pitching side of things, Louisville fairs a little better against the Commodores but it isn’t by much. While they boast an ERA that ranks 6th in the SEC, it being a midweek game actually does not do the Cards any favors as Vanderbilt’s statistically best pitcher is a newly converted midweek starter. Over 6 starts and 13 appearances on the mound, sophomore right-hander Mason Hickman sports the Commodores’ best ERA and WHIP with 2.05 and .95 respectively. With 74 strikeouts, he is second on the team in that category while only allowing 13 walks. The key for Louisville at the plate in this game will be to work the count and try to inflate Hickman’s pitch count as he has only tossed 80+ pitches 3 times in his 13 appearances. But while Hickman will be a nuisance for the Cardinal Nine, the Vandy bullpen won’t provide much relief for them. 4 of the Commodores’ 6 best ERAs belong to pitchers who have exclusively made relief appearances. Fortunately two of them are Ethan Smith’s 3.80 & Jake Eder’s 4.18, while the other two are Hugh Fisher’s 2.13 and Tyler Brown’s 2.70. Depending on matchups at the plate, chasing Hickman out of the game could be a bad thing or a good thing.

While UVA head coach Brian O’Conner won the national championship in 2015, this year’s iteration of the Baseball Hoos isn’t exactly up to championship standards. They are 4 games under .500 in conference play and are only 5-12 against Quadrant 1 opponents. Offensively speaking from a conference perspective, they are the definition of average as most of their offensive stats are in the 5-10 region in conference ranks. The engine that drives the offense for the Cavs is infielder Tanner Morris. The sophomore leads the team in all three slash line categories with .342/.456/.533, runs (45), hits (63), doubles (20, which ranks 6th in the nation), home runs (5), total bases (98) and walks (37). On top of being essentially being the heart and soul of the Cavalier offense, freshman infielder Nic Kent and sophomore catcher Brendan Rivoli are also the only other Cavs on the roster to both drive in 30+ runs and 3+ home runs. Virginia has a very hearty middle of the order, but the majority of the remainder of the lineup card leaves much to be desired for them.

The Cavaliers better hope that they can put up some runs against the Cards’ ACC-best pitching staff, because their own pitching staff isn’t exactly something to write home about. UVA’s WHIP ranks 4th to last in the ACC, their strikeout-to-walk ratio of 1.85 ranks 3rd to last, and their walks allowed per nine innings ranks 2nd to last. All three pitchers in the starting rotation don’t exactly do a great job at keeping batters off base. Right-handers Griff McGarry & Noah Murdock boast 61 strikeouts on the season, but McGarry has also allowed a staggering 50 walks (has a WHIP of 1.78). In 48.0 innings pitched, freshman righty Mike Vasil has only struck out 34 batters on the season while issuing 19 walks to boot. The left-handed batters in the Cards lineup like Jake Snider, Logan Wyatt, Alex Binelas and Zeke Pinkham should have no issue producing runs against UVA’s starters. Right-handers Devin Ortiz & Chesdin Harrington provide UVA with their best bullpen options, as they combine for 75 strikeouts to only 15 walks, as well as a combined ERA of 3.09 and WHIP of 1.28. Outside of those two, most of UVA’s relief pitchers have issues with their strikeout-to-walk ratios or surrender too many earned runs. Even with it being a road matchup against championship caliber head coach, the Cardinal Nine under Coach Mac’s tutelage will pose a fair shot for Louisville to win the series.

I predict that after Vanderbilt defeats Louisville in the Battle of the Barrel, the Cards will rebound by winning the weekend road series against Virginia two games to one.