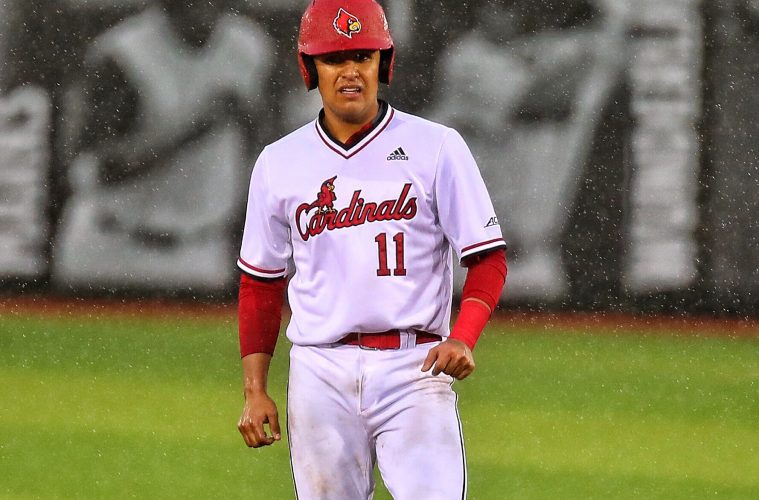 Playing in their 182nd matchup in a series dating back all the way to 1924, the #4 Louisville Cardinals (36-9) took care of business against the Western Kentucky Hilltoppers (20-22-1) to the tune of 11-4, relying on their recent other-worldly offensive hot streak to secure to win. Team RBI leader Tyler Fitzgerald and reigning ACC & National Player of the Week Alex Binelas combined to go 5-10 with 7 of Louisville’s 11 total RBIs.

While the offense was not the first to score in the midweek affair, they were quick to respond to the Hilltoppers. After Western took an early 1-0 advantage in the top of the second, freshman third baseman Alex Binelas seized the lead for the Cards in the bottom of the inning with a 2 run home run down the left field line. This would be his 7th long ball of the season, tying first baseman Logan Wyatt for the team lead. Later in the inning with 2 outs, leadoff man sophomore Lucas Dunn would chime in and show off his batting clutch with a single to plate a run and give Louisville a 2 run lead.

Until the fourth inning, starting pitcher freshman Jack Perkins had tossed a relatively efficient game. He kept his pitch count low and gave pitchers not many great pitches to work with. However WKU figured him out and plated 3 runs in the fourth, two of which were credited to him with newly inserted reliever right-hander Bryan Hoeing on the mound. Though once the bases were cleared for Hoeing, he struck out a pair to end the threat of any more Hilltopper runs.

Facing a deficit yet again, the Cardinal Nine once again erased it. Louisville tied the game with a sacrifice fly from junior shortstop Tyler Fitzgerald, then took the lead in the next at-bat on a groundout RBI from Logan Wyatt. Also contributing in the inning was reigning national player of the week Alex Binelas, sending home a run and registering his 3rd RBI in just 4 innings.

The fifth inning saw Louisville plate 3 runs for the third time in the contest, all thanks to the 1-3 spots of the lineup. Lucas Dunn, junior outfielder Jake Snider and Tyler Fitzgerald all registered RBI singles, and helped give Louisville double digit hits for the 24th time this season. Fitzgerald also further extended his hitting streak to 14 games, good for longest active hitting streak on the team.

Once Louisville started to pull ahead, the bullpen pulled their weight as well. Like Perkins, Bryan Hoeing would also toss 3.0 innings, but this time he would only allow 1 run while striking out 3 batters. Following him up on the mound was junior right-hander Shay Smiddy, who would toss a no-hit scoreless seventh inning.

In the waning innings of the midweek contest, the Cardinal Nine took it upon themselves to launch some fireworks. Both Tyler Fitzgerald and Alex Binelas hit solo home runs to put Louisville into double digit runs for the 18th time this season and the 10th time in their last 13 games. This would also mark the first career multi-home run game for Binelas.

Even though they had a 7 run lead with 2 innings to go, the bullpen still continued to pitch like the game was still in jeopardy. Pitching an inning each, juniors Adam Elliott and Luke Smith would strikeout 2 WKU batters each, with Smith not allowing a baserunner. By the end of the night, the Louisville pitching staff would toss 9 strikeouts and only allow 2 walks.