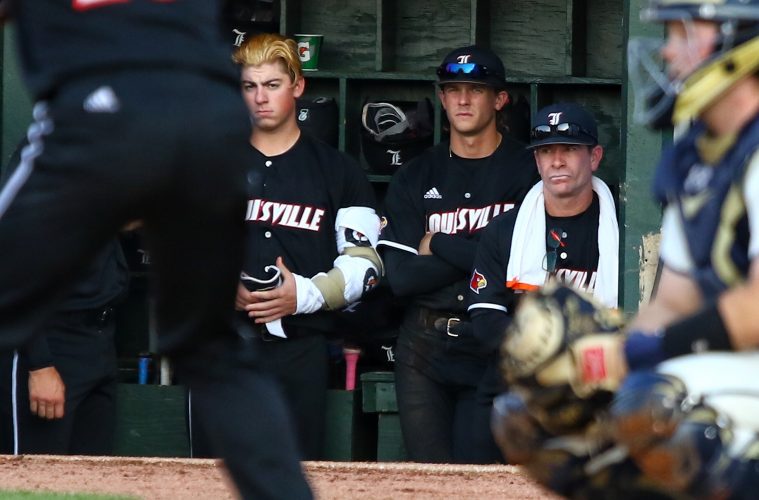 Heading down south to the country music capital of the world for the road version of the Battle of the Barrel, the #29 Louisville Cardinals (30-14) took on their heated baseball rival the #15 Vanderbilt Commodores (25-19) and sounded defeated them in Nashville. The 8-4 victory was their 3rd straight win over Vanderbilt, and their 5th straight win in Nashville. Not only did Louisville swing hot bats, the Cardinal Nine’s pitching kept the commodores in check for most of the game.

Louisville got right down to business as soon as the game started, plating 5 runs in just the first two innings of the game. This included 4 runs in the second, where sophomore shortstop Tyler Fitzgerald, junior second baseman Devin Mann and sophomore Logan Wyatt all had RBI base hits.

While Vanderbilt countered with a run in the bottom of the third, starting pitcher freshman Reid Detmers made sure it would be the only run they would get out of him. In his 5.2 innings of work, he would allow the lone run on just 4 hits and 3 walks, while striking out 5 batters. Once he was worked into a sixth inning jam, junior Bryan Hoeing would relieve him and pick up where he left off. He too would also give up just one run in his 2.2 inning relief outing, as well as strike out 4 batters.

In the later innings, Louisville would continue to pile on the insurance runs. Junior outfielder Josh Stowers would come home on a sac fly in the fifth, sophomore designated hitter Danny Oriente would smack an RBI triple in the seventh, and Tyler Fitzgerald would score on an error in the eighth to make it an 8-2 ball game. By the time Louisville was done hitting, 7 of the 8 starting position players would make it safely on base.

Vandy did make it somewhat interesting in the final frame. Graduate transfer Austin Conway would come in and attempt to close the door, only to have the Commodore launch a 2 run home run off him. After allowing another man on base, sophomore Michael McAvene would come into the game and shut the door off just one pitch that resulted in a double play.