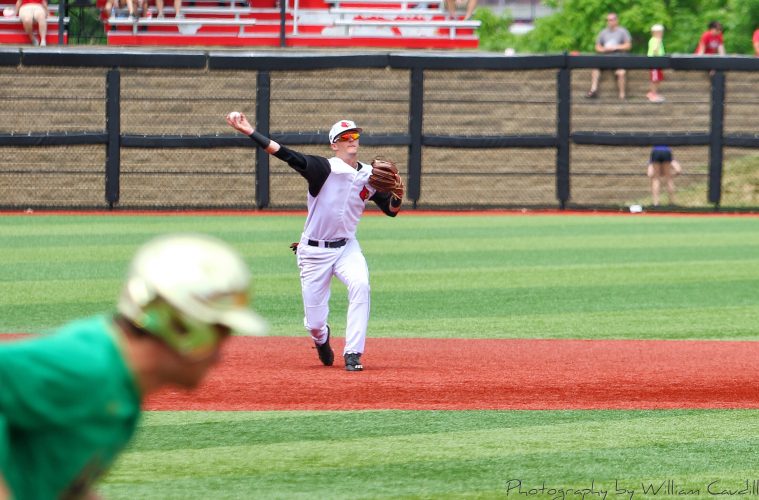 Playing in their first conference tournament final since 2014, the #25 Louisville Cardinals fell to the #9 Florida State Seminoles, 11-8 in extra innings despite the best efforts of Devin Mann, Josh Stowers and Zach Britton. The red hot offense was not enough as the pitching staff could never get truly established and errors would haunt the Cardinal Nine. Louisville falls to 1-6 against FSU over the last two seasons.

Louisville’s pitching staff didn’t have the hottest of starts to the contest, allowing 2 runs in the opening frame and 5 total runs through three innings. Starting pitcher freshman Bobby Miller had a bit of trouble finding the zone, walking 4 batters, striking out only 2 and allowing 3 runs before he would be yanked after 2.1 innings. Relieving Miller, junior Bryan Hoeing would also struggle with his command a bit, as a wild pitch and single would bring home an additional two runs.

While the Cards’ pitching struggled a bit to open the game, their offense continued to fire on all cylinders. An RBI groundout in the second inning courtesy of sophomore designated hitter Danny Oriente put the Cards up on the board, but the third and fourth innings is when the offense really came to life.

Their next 6 runs scored came exclusively off the long ball. Junior second baseman Devin Mann cut FSU’s 4 run lead in half with a two run blast in the third, then a solo shot from junior outfielder Josh Stowers in the fourth would cut FSU’s lead in half as well. Following a pair of singles after Stowers’ long ball, freshman catcher Zach Britton got in on the action as well with a 3 run home run that would give Louisville a 7-5 lead through 4 innings.

With the offense lighting up the scoreboard, the pitching staff as a whole continued to struggle as the game progressed through the middle innings. Although Bryan Hoeing would pitching a scoreless fourth and fifth and the Cards would add an insurance run in the fifth to make it 8-5, he would surrender FSU’s sixth run as well as work himself into a bases loaded jam in the sixth with no outs. A lineout double play by first baseman Logan Wyatt would help his cause, but a HBP on the next FSU batter would spell the end of his relief outing. Freshman Reid Detmers would come into the game facing the bases loaded and two out, and get a crucial strikeout to preserve Louisville’s 2 run lead.

The Cardinal Nine had been playing relatively disciplined baseball as of late after having a subpar defense in the middle of the season, but the young team showed their youth today. 3 errors on the day including one in the seventh helped the Seminoles climb back into the game and tie it at 8 runs a piece after pickoff attempt by Detmers would sail past third baseman Justin Lavey.

Relieving Detmers, fireballing sophomore Michael McAvene set up Louisville to have some ninth inning magic  by finishing the eighth and tossing a scoreless ninth. Unfortunately, Louisville could not capitalize with two runners on and two outs, and the Cards would go into extra innings for only the second time this season (Indiana) and it would be the first extra inning ACCBC title game since 2003.

However, the Seminoles would bounce back in the first extra frame. After loading up the bases, Louisville would make a pitching change and go with sophomore Shay Smiddy. Though this would not make a difference for the Noles, and they would plate 3 runs on break the 8-8 tie. Louisville could not respond with any runs of their own, and the 11-8 score would stand by the end of the tenth inning.

Up next, the Cards will find out their NCAA Baseball Tournament draw on Monday, May 28th at noon on ESPNU.