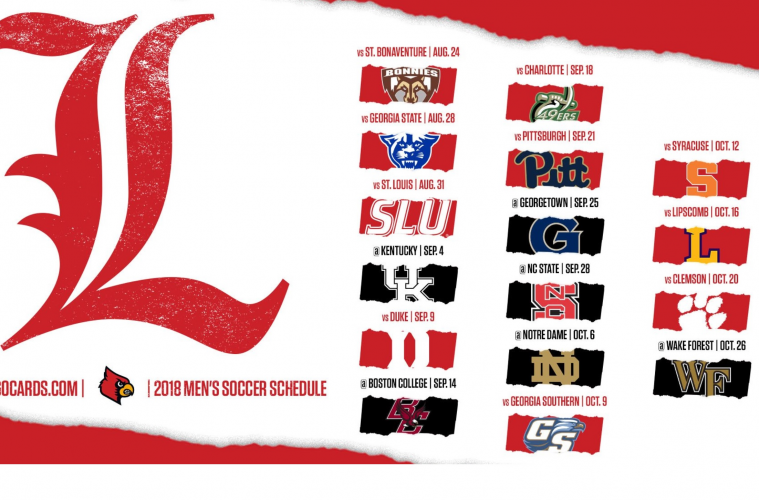 LOUISVILLE, Ky. – The University of Louisville men’s soccer team released its 2018 schedule on Tuesday afternoon and the lineup features six matches against 2017 NCAA Championship qualifiers as well as 10 games at Dr. Mark and Cindy Lynn Stadium.

The Cardinals, who advanced to the quarterfinal round of the NCAA Championship for the fifth time in the last eight seasons in 2017, will face another challenging slate for head coach Ken Lolla‘s 13th season. Louisville’s home schedule includes a pair of matches against NCAA qualifiers – Duke on Sept. 9 and Clemson on Oct. 20. Season tickets for the 2018 campaign are on sale now and can be purchased here.

“We’re excited about the balance of our schedule and the challenges and opportunities it presents,” Lolla said. “Our goal in scheduling is to provide our team the opportunity to have the highest seed possible going into the NCAA Championship. This schedule does that for us.”

The road portion of the 2018 schedule is highlighted by visits to NCAA Championship qualifiers Georgetown (Sept. 25), NC State (Sept. 28), Notre Dame (Oct. 6) and Wake Forest (Oct. 26). Louisville will begin the 16-match regular season with a trio of home games in August as St. Bonaventure visits Lynn Stadium on Aug. 24, Georgia State arrives on Aug. 28 and Saint Louis checks in on Aug. 31.

The Cardinals kick off the month of September with a road match at rival Kentucky (Sept. 4) before opening its fifth season in the ACC with the home contest against Duke. The eight-match ACC grind will continue on Sept. 14 at Boston College. Louisville returns home for back-to-back games at Lynn Stadium against Charlotte (Sept. 18) and Pittsburgh (Sept. 21). The month ends with the road trips to Georgetown and NC State.

The final month of the regular season begins with the road match at Notre Dame before concluding the home schedule with four consecutive matches at Lynn Stadium. The Cardinals host Georgia Southern (Oct. 9), Syracuse (Oct. 12) and Lipscomb (Oct. 16) before the match with Clemson caps the home slate. Louisville ends the regular season with its trip to Wake Forest.

Prior to opening the regular season, Louisville will play two preseason matches. The Cardinals face off against Indiana on Aug. 15 in Westfield, Indiana and will host Evansville at Lynn Stadium on Aug. 18.