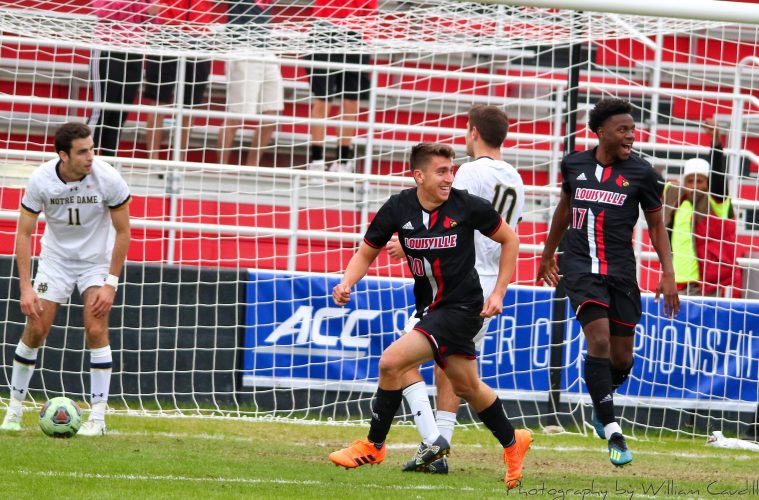 LOUISVILLE, Ky. – Tate Schmitt connected on a header in the 86th minute to lift the No. 15 University of Louisville men’s soccer team to a 1-0 victory over No. 18 Notre Dame in Sunday afternoon’s ACC Championship quarterfinal at Dr. Mark and Cindy Lynn Stadium.

With the victory, the fourth-seeded Cardinals (9-4-3) advance to an ACC semifinal clash against No. 1 Wake Forest Wednesday at 7 p.m., ET at Spry Stadium in Winston-Salem, N.C. Louisville, which lost a 2-1 overtime decision on the road to the Demon Deacons on Oct. 26, is making its third appearance in five seasons in the ACC semifinals. Wake Forest advanced to the semifinals with a 2-0 quarterfinal win over NC State on Sunday afternoon.

With the Cardinals and Fighting Irish (10-6-2) nearing the end of regulation in a closely contested match, Schmitt delivered again in the postseason as his header from 12 yards out scored inside the left post at the 85:06 mark for the only goal of the day. Freshman Pedro Fonseca was credited with his second assist of the season after his perfectly placed cross into the box found Schmitt in space for the scoring chance.

“When you look back on how many tournament time winners Tate’s had, he’s a guy who shows up in big moments and I’m not surprised that he got the game-winner,” Lolla said after the match. “It took us a little bit of time to get it going, but I thought midway through the second half, the energy picked up a little bit. I thought we had a little more possession. We played a really good ball in behind to Pedro, who continues to have an impact on our games. He played a great ball to Tate and Tate does what he does.”

The goal was the fifth of the season and the 26th career tally for Schmitt, who has scored the game-winning goal in each of Louisville’s last five postseason victories. That streak includes both NCAA Championship wins in 2017 and two NCAA wins in 2016. Schmitt is tied for sixth all-time at Louisville with his 26 career goals matching the total for Ali Elwakhi from 1980-83.

After the gaining the lead, the Cardinals did not surrender a shot to the Fighting Irish over the final 4:54 of the match to clinch their sixth straight win at home in the series. Louisville, which avenged a 2-1 overtime loss at Notre Dame in the regular season, had a 9-8 edge in shots on Sunday, including a 3-2 advantage on goal. Redshirt sophomore goalkeeper Jake Gelnovatch had a pair of saves to clinch his fifth shutout of the season and the seventh overall for the Cardinals.

Wednesday’s ACC semifinal at top-seeded Wake Forest will be televised on ACC Network Extra. No. 2 seed North Carolina will host No. 3 seed Duke on Wednesday at 7 p.m., in the other semifinal match. The advancing teams will face off in the ACC Championship final on Sunday, Nov. 11 at noon ET in Cary, N.C.