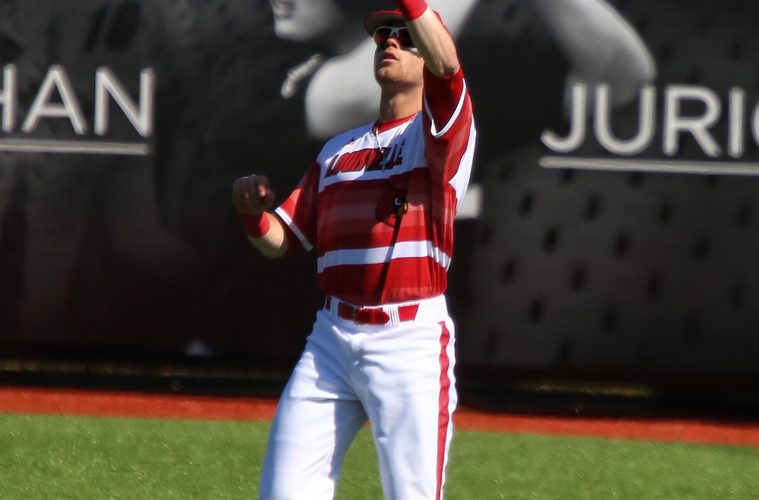 Facing a top 5 opponent for the second weekend in a row, the #11 Louisville Cardinals had the opportunity to take their first ACC series since playing UNC, but instead failed to close the job and lost two out of three games to the #4 North Carolina State Wolfpack. After a dominating performance in game 1, the Cards were on the verge of winning the series in game 2 but a blown save cost them the contest, and they proceeded to get blown out in game 3.

Despite the series loss, there were a couple promising performances over the weekend. Logan Wyatt and Danny Oriente combined for 8-19 and were responsible for 9 of Louisville’s 16 RBIs. Nick Bennett also had 8 strikeouts in his six inning game 2 start.

Game 1 of the series might have been underneath windy and chilly conditions, but that didn’t stop Adam Wolf and Logan Wyatt from being key contributors in the series-opener. The scoreless start from Wolf and grand slam from Wyatt helped secure an 8-2 win, and marked the first time that Louisville had won the opening game of any series since March 9th against UNC.

The Cardinal Nine broke through on the scoreboard first, and they did so in a big way. When a pair of walks and a single loaded up the bases in the third inning, sophomore first baseman Logan Wyatt took advantage of the excellent run scoring opportunity and hammered a grand slam over the right field wall. The ball nearly struck a passing train, and was the Cards’ first grand slam since February 25th (Devin Mann vs. Youngstown State).

Taking advantage of the fact that NC State had to dip into their bullpen before Louisville, int he sixth inning sophomore outfielder/designated hitter Danny Oriente drove in a 2 RBI single up the middle right after the Wolfpack had made a pitching change. NC State’s starter was might have been knocked out after 4 innings, but Louisville’s starter remained strong. Junior lefty Adam Wolf put up zeros in every inning of his 7.0 inning start, striking out 6 Wolfpack batters in the process.

NC State would make it interesting in the later innings though. The Wolfpack would drive in their first runs of the game thanks to a 2 run blast that snuck by the left field foul pole. However, newly inserted reliever Shay Smiddy was able to escape the eighth inning without giving up any more runs. The Cardinal Nine countered that by bringing home a pair of runs of their own in the bottom of the eighth, thanks to a wild pitch and an RBI single by Danny Oriente. Smiddy continued his relief outing into the ninth inning, and was able to close the door on the Wolfpack.

Going into the ninth inning clinging to a 1 run lead and on the verge of their first series win in a month, the Cards could not finish the job as junior closer Sam Bordner blew a save for the second straight weekend. His 4 earned runs in the ninth inning ballooned his season ERA from 2.03 to 4.30.

Heading into today’s game, NC State’s starting pitcher Brian Brown led all of Division I baseball in ERA with 0.43. Instead of succumbing to the sidearm starter, the Cardinal Nine had other ideas. After the Wolfpack jumped to a 1-0 lead in the top of the fourth, Louisville responded with a 2 RBI single courtesy of sophomore outfielder Danny Oriente and followed that up with a Tyler Fitzgerald RBI single in the fifth.

Like in the game prior, Louisville’s starter remained strong while NC State’s had an early exit. Sophomore left-hander Nick Bennett did not give up an earned run until the sixth inning, and struck out 8 Wolfpack batters. Despite giving up a 2 run homer in the top of the sixth, once again the Cards would respond. Back-to-back doubles by freshman outfielder Drew Campbell and sophomore third baseman Justin Lavey would plate 3 more runs for Louisville and push them ahead 6-3 after six innings.

The Wolfpack weren’t going away quietly though. After Bennett’s day was done and junior right-hander Bryan Hoeing would make an entrance in the seventh inning, NC State took advantage of the change and put up two runs on the board to cut the lead to 1. Sophomore left-hander Adam Elliot came into the seventh with two outs fro damage control and was able to give the Cards 1.0 innings of scoreless relief.

Sam Bordner made his entrance into the game needing just four more outs to close the door and seeking his ninth save of the season. The lone out to get in the eighth came easy, but the ninth inning was anything but. Three straight singles would load the bases, and a double would clear them all. Adding insult to injury, the Wolfpack followed that up with another single to send the double-hitting runner home and make it a 9-6 game. When the top of the inning finally came to a close, Louisville was unable to getting anything going and was sat down in order to secure the loss.

Cards Blown Out In Rubber Match, 10-3

Marred by errors & bad defense, inconstant pitching and offensive ineptitude, the Cards had lost all momentum following the previous day’s blown save and proceeded to get absolutely dominated to the tune of 10-3. Louisville batted just 0-6 with runners on base and 0-4 with runners in scoring position, as well as didn’t get an outing longer than 3.0 innings from any of their pitchers.

Making his ninth appearance of the season, freshman right-hander Bobby Miller’s first ever collegiate start didn’t quite get off on the wrong foot. 2 hits followed by a walk would load the bases, and a throwing error would bring all three runners home to give NC State a 3-0 advantage after just one inning. Attempting to chip into yet another early deficit, Louisville would cut the lead to 2 thanks to a sacrifice fly by sophomore outfielder Drew Campbell in the second inning.

However the Cardinal Nine had a hard time getting things going in the early innings, striking out five time through the first three innings. Pitching wasn’t fairing much better, as Miller’s day would come to and end after only 3 innings pitched. Newly inserted freshman lefty Reid Detmers would get a quick pair of strikeouts in the third, but a pair of walks would come back to haunt as the Wolfpack belted a three run moonshot to extend their lead to 5.

Entering in the fifth, Junior right-hander Riley Thompson turned things around for the pitching staff on the day, tossing three innings without an earned run and striking out 3 batters. But an infield error and a missed play in the outfield would plate an additional 2 runs for NC State in the seventh inning. The Wolfpack had runners on the corners and two outs in the eighth, but a failed pickoff at first allowed both runners to steal and push the lead to blowout territory with a 9 run advantage after eight innings. The overbearing deficit would prove too much, as Louisville could only muster 2 runs in the bottom of the ninth thanks to Ben Bianco and Tyler Fitzgerald.