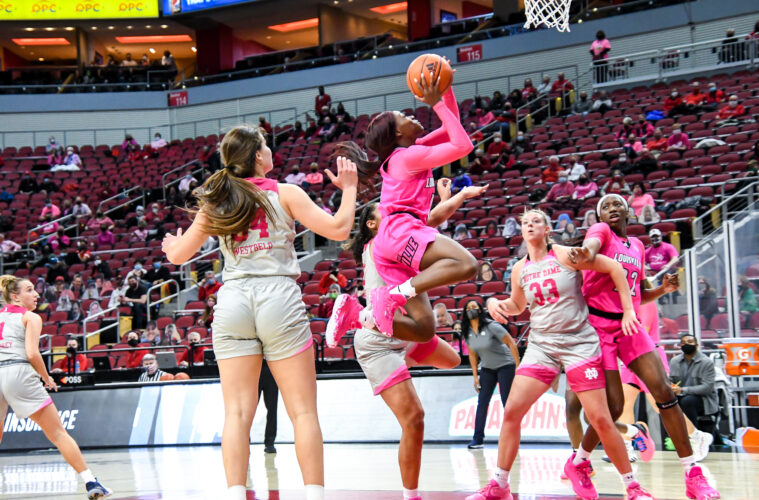 No. 1 Louisville Holds On Against Notre Dame

LOUISVILLE, Ky. (AP) – Dana Evans scored 27 points, including five in the final minute, to lead No. 1 Louisville to a 71-65 victory over Notre Dame.

The Cardinals (18-1, 11-1 Atlantic Coast Conference) won their second straight, and Evans their lone senior was a major reason why. The player of the year candidate scored 16 of her points in the first half to help Louisville take a 42-34 lead at the break.

The lead would grow to 11 less than 90 seconds into the second half. However, the Fighting Irish (8-8, 6-6) cut that to 52-50 with 3:16 remaining in the third quarter thanks to three consecutive layups by Olivia Miles.

Notre Dame had a couple of chances to tie or take the lead on ensuing possessions, but Louisville eventually responded with a 9-0 run to answer that challenge. Still, the Irish remained in the game.

A 3-pointer by Dara Mabrey would cut the Louisville lead to 66-65 with 1:41 left. Evans, though, responded with a 3 of her own with 57 seconds remaining. She then iced the game with a pair of free throws with 13 seconds left.

Miles was one of four players to score 10 points as the Irish had a balanced scoring attack. The seven Notre Dame players who scored all had at least eight points.

Notre Dame: The Fighting Irish hung in there with the Cardinals throughout the game. However, while they held Louisville to 40 percent shooting, they could not make the stops when they needed to and lost their third straight contest.

Louisville: The Cardinals saw the return of Balogun and Olivia Cochran, both of whom missed Thursday’s game at Boston College. Cochran suffered a slight injury in practice before the contest, while Balogun was training with the Nigerian national team for the upcoming Olympics. Both came off the bench Sunday, and Cochran finished with 11 rebounds.