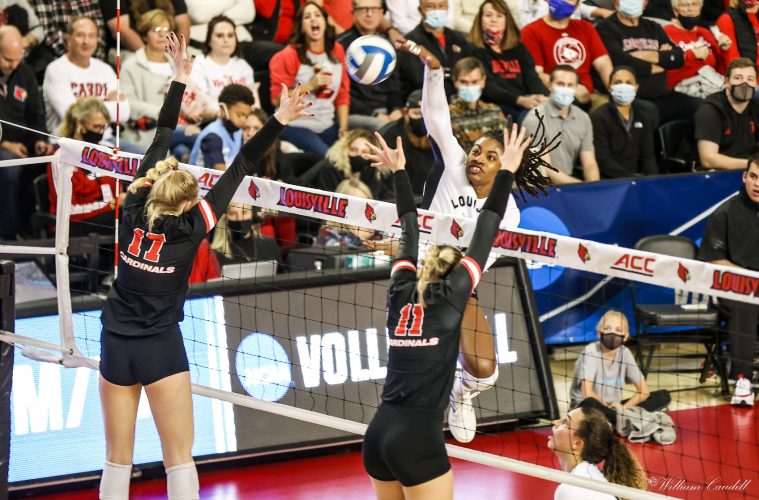 Aiko Jones tallied 10 kills on 18 swings to hit a team-high .389 and Anna Stevenson recorded her 1,000th career kill to lead No. 1 University of Louisville past Ball State in the second round of the NCAA Tournament on Saturday night at L&N Federal Credit Union Arena.

“I’m just really proud,” said Louisville head coach Dani Busboom Kelly on the win. “This is our third Sweet 16 in a row and it wasn’t that long ago when just that was a huge goal for us, so it’s pretty exciting that we’re back there for a third time.”

Louisville is now 30-0 on the year, reaching the 30-win mark for the first time since 2012 and only the sixth time in program history, and advances to its third consecutive Sweet 16. As a team, the Cardinals had 39 kills and hit .240 with nine aces, 44 digs and 12 blocks. Anna DeBeer was second on the team with nine kills, hitting .300 with two aces, five digs and two solo blocks. Stevenson recorded seven kills on 13 swings to hit .385 for the match, adding a team-high three aces and three solo blocks. Tori Dilfer paced the offense with 35 assists on the night and Elena Scott led the team with 15 digs.

Set 1
UofL scored three of the first four points of the set to take an early 3-1 lead. A three-point run from Ball State saw the Cardinals down 5-4 but they would answer quickly, landing a big swing from Claire Chaussee to tie the set 5-5. Louisville then turned in a four-point run of its own to go up three at 9-6. Ball state rallied again, putting together another 3-0 run to tie things up 10-10. The set remained tightly contested as the teams traded points, but back-to-back kills from Anna Stevenson and an ace from Anna DeBeer gave the Cards momentum and a 15-13 lead heading into the media timeout. Louisville held on to its slight lead through the break, eventually forcing Ball State to take its first timeout of the set after scoring two straight points for a 19-16 lead. The Cardinals continued to control the set the set through the timeout, forcing Ball State to use its final timeout of the set up 23-19. Ball State’s timeout paid off as they scored two in a row after the break to get back within two at 23-21 as Louisville called its first timeout of the set. The Cardinals took the first point after the timeout, but Ball State scored the next two, closing the gap to 24-23 as UofL used its final timeout of the set. The first set came down to wire, going into extra points with neither team able to score the final point. Down 27-26 late, the Cardinals rallied together, scoring three straight points to win the first set 29-27.

Set 2
Louisville carried its momentum into the second set, putting together a 6-0 run led by the outstanding service of Ayden Bartlett, to jump out to an early 7-1 lead and force Ball State to call its first timeout. The Cardinals took the first two points following the timeout before Ball State halted the 8-0 UofL run. The Cards went right back on the attack, siding out to start a three-point run to extend their lead to nine at 12-3. Ball State scratched to stay in the set, managing to trade points and stay within ten, but a big block by Amaya Tillman and cross-court kill from Claire Chaussee forced Ball State to call their second and final timeout of the set, down late 18-8. Louisville continued to dominate the second set, taking three of the first four points after the break to extend its lead to 21-9. The Cardinals would eventually turn in another 3-0 run and cruise to a 25-11 victory for a set advantage.

Set 3
Tightly contested to start, the Cards turned up the heat, railing off five straight points to take a 9-4 lead and force Ball State to use its first timeout of the set. UofL scored two more points after the timeout for an 11-4 lead, highlighted by Anna Stevenson’s three aces, before Ball State ended the Cardinals seven-point run. Louisville continued to control the set as the teams traded points, but a four-point run from Ball State cut the Cardinals’ lead to four at 15-11, causing UofL to call its first timeout of the set. The Cards took advantage of their timeout, scoring three of the first five points out of the break to go back up five at 18-13. UofL would continue to apply pressure, taking four of the next six points, led by a solo block each from Anna Stevenson and Claire Chaussee, extending its lead to seven at 22-15 and forcing Ball State to use its final timeout of the set. Ball State put together a late rally out of its timeout, scoring four of the first five points to cut the lead to four at 23-19, but Louisville would go on to take the next two points to win the set 25-19 and complete the sweep.

Up next, the Cardinals take on the No. 16 seed Florida Gators as UofL hosts the regional rounds of the NCAA Tournament next week at Freedom Hall.