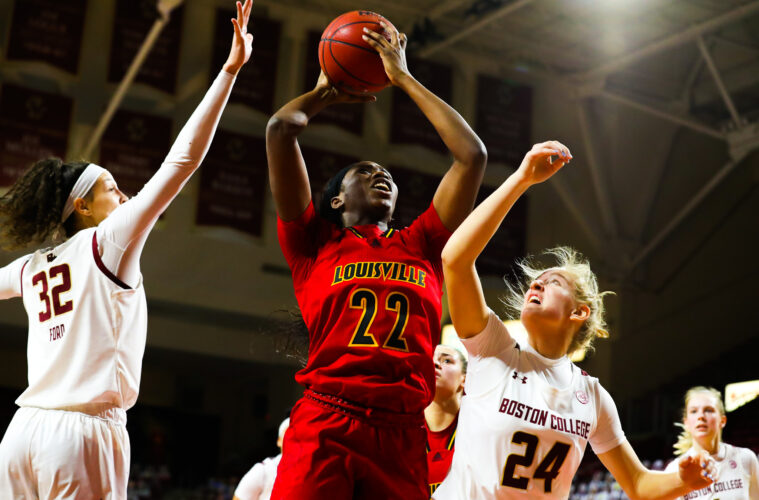 No. 1 Louisville Women’s Basketball Bounces Back On The Road At Boston College

The No.1 ranked Louisville Cardinals went on the road to face Boston College today. This would be the game where the Cards could bounce back from their 14-point loss on Sunday.

Shots were falling early for both teams and with a couple of young players, Boston College managed to hang with the top ranked Cards by shooting behind the three-point line. We saw an angry Jeff Walz early after Boston College hit 6 three-pointers. What Boston College also did, was allow Louisville to play out of transition and in the second quarter, the Cards went on a 17-2 run. There was a noticeable difference in the team we saw Sunday against NC State and the team we were seeing against Boston College tonight. There was a strong effort when attacking the basket and at halftime Louisville had tallied 24 points in the paint. To put that into perspective, they only had 18 points in the paint at the end of their loss against NC State. Louisville was also rebounding better, posting 10 offensive boards and 11 defensive boards in the first half.

Despite a few turnover issues and some other minor slip ups, Louisville still had a decent second half. The team had 8 different players post points during the half, led by Dana Evans who would add 11 points to her stat line. The Cards also continued to stay aggressive under the basket scoring 26 of their 47 second half points in the paint. Overall, the team was shooting 60% during the second half and continued to rebound the ball successfully adding another 22 for the night. In their 97-68 victory over Boston College, Louisville scored 50 points in the paint, shot 56.9% from the field, 81.3% from the line, and won the rebounding battle 43-27. Dana Evans led the team in scoring with 23 points to go along with her 4 rebounds and 5 assists. Hailey Van Lith, Kianna Smith, Liz Dixon, and Norika Konno all had double-digit scoring nights as well tallying 15, 14, 11, and 10 points, respectively. Mykasa Robinson led the team in rebounds with 8 and Norika Konno was not far behind her with 7 of her own.

The No. 1 Cards are back home in the Yum! Center this Sunday and will be hosting Notre Dame. The game will tip-off at 2p.m. and can be seen on ESPN. You can also listen to the game on 790AM-KRD.