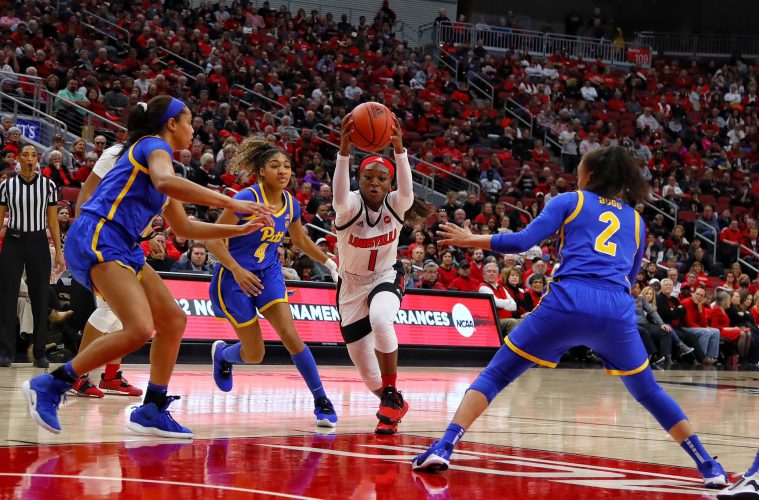 It wouldn’t have been unreasonable for Pittsburgh women’s basketball to have entered the KFC Yum! Center aiming to keep their losing margin below 40. If that were the metric, then mission accomplished. The Cardinals, however, showed no sympathy with an 83-49 win over the zero ACC win Panthers.

As for the Cardinals, plenty of young and old players would see i large quantities of time on the court despite a sluggish start. Pitt managed to penetrate early on for a couple of layups and a kickout for three before the first media timeout was reached with the score 7-4 in favor of the Panthers. But after the ball was placed back in play the Cardinals erupted for a 14-0 run from which they’d never look back.

Pitt had been averaging 60 points per game on offense while allowing 70 on defense, but nothing could stop the Cards from rolling to 83 points while holding an opponent to under 50 for just the fifth time this season. Much of that defensive effort can be attributed to Jaz Jones (five steals), Yacine Diop, and Bionca Dunham.l

Dunham, for her own part, had a sort of coming out with 12 points, six rebounds, and six assists. The senior’s contributions had, as her teammates put it, been the kind that doesn’t show up on a stat line. On Sunday it was clear from the smile on her face that Bionca was happy to be getting the visibility she’s been working towards.

It’s difficult to attribute the win (or any blowout win) to one particular player, and doubly so for this game. No individual Cardinal would spend more than 30 minutes on the court. Six Cardinals were in double figures with none scoring more than 12. Louisville turned the ball over just 10 times while Pitt had 22, with the Cards notching 23 assists. The cherry on top of that 1:2.3 ratio was a late second quarter transition basket that started with Mykasa Robinson and touched all five players hands before Elizabeth Balogun laid it in to thunderous applause.

By the end, the Cardinals were having fun in what at that point felt like a scrimmage. Teammates worked to get each other ball. Norika Konno furiously scribbled notes on the sideline as Jeff Walz waxed poetic about this play or that. Jaz Jones made eye contact and smiled at the throngs of young Girl Scouts in the lower bowl as the Yum! Center welcomed 11,000 fans.

Jessica Laemmle, returned from quarantine, and Lindsey Duvall were into the game with over seven and a half minutes to play. Meanwhile, Mykasa Robinson had joined Yacine Diop for a combined 44 minutes and 12 points, 10 rebounds, and six assists. Both Robinson and Diop looked comfortable in their roles despite some slip-ups, and quality time like this should pay dividends in March.

The #5 Cardinals now have four days to prepare for another struggling team, the Notre Dame Irish. Despite the woes in South Bend, Jeff Walz predicts a contest. A win at Notre Dame followed up with a friendly but focused performance against the USA national team should go a long way towards preparing the Cardinals to secure the top seed in the ACC tournament.

But Georgia Tech and N.C. State await the Cardinals in February. Then we can start talking about Greensboro.