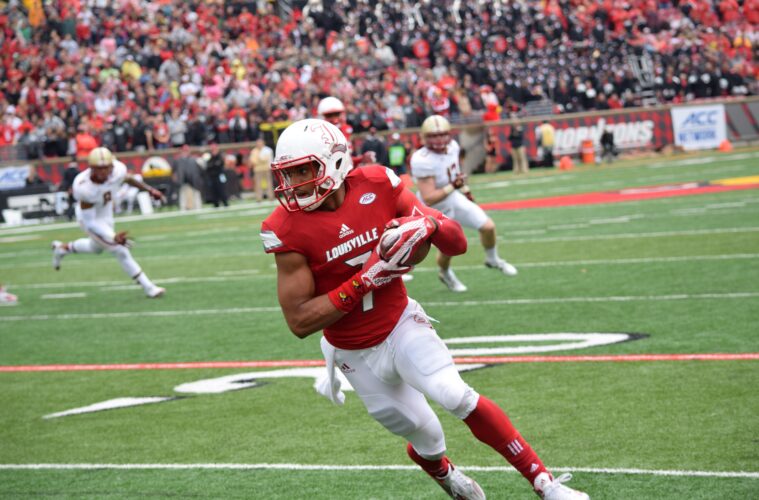 The Return of Micky Crum

It’s easy to forget a player.  Sometimes they lose their starting spot,  or their play goes unnoticed on the field, or in some cases, battling an injury.   Or your QB is awesome and most of the media focus is on him during a Heisman run.

In the case of Micky Crum, all of the above happened.   Due to a nagging injury, he saw limited action in 2016.  How limited??  He caught one pass against Charlotte in the first game for a gain of 7 yards….it would be his only catch of the year.   I had to do a double take when I saw that stat because surely it was a mistake. Sadly it was not.

Coming straight out of Columbus, Ohio in 2015 where he was Mr. Everything at Hamilton Township High, Crum only had offers from Bowling Green, Ohio, and Western Michigan.   He chose Louisville and vowed to make Urban Meyer pay for sleeping on him (**he didn’t vow this, I did).

Back in 2015,  injuries to JUCO transfer Cole Hikituni and returning player Keith Towbridge, forced Crum into the starting lineup. He wound up making his first start against Auburn in the Chick-Fil-A Kickoff catching 2 passes for a total of 19 yards.  It was not until the next week he would make his presence felt on the field.

Against Houston, Crum would  take over the game in the 4th quarter.  Although the Cards came up short, he finished with 6 catches for 103 yards and his first touchdown.  It would also be the first time he would break out “The Silencer” celebration dance after a score.  This dance was made famous by Lebron James, who would go on record to admit that he stole that celebration dance from Crum after seeing  him do it in high school  (**James refused to be interviewed for this story and denied stealing the dance).

One thing this city loves is a blue collar worker who is not afraid to  get his hands dirty. Coming from a blue collar state, Crum’s physical play is one thing the fanbase admired from early on.   Let’s take for instance the 2015 Clemson game.  There was one play that will forever be known as  “Crum killed a guy”

That was Clemson defender T.J. Green who forgot to keep his head on a swivel and paid the price.   As you see in the above video, Green went straight to the sideline and appeared to look for his soul.  And just like that, the legend of Micky Crum was born.

Crum plays with a swagger yet remains humble.   I remember reading an article on him running hills at a local park and then flipping tires.  I can’t even walk up a flight of stairs without getting winded.

To finish the 2015 season, he would play in 12 of 13 games and catch a TD in the Music City bowl to help Louisville beat Texas A&M.   Big things were expected of him in 2016 but then a nagging injury would sideline him for 9 games of the season.  Couple that with the play of Cole Hikutini and you could see how the fanbase may forget.

But we are now in a new season and Crum is healthy and ready to once again contribute.  He was listed as the second string tight end behind Charles Standberry but is expected to see major minutes.   I spoke to Standberry at UofL’s media day and he advised that the tight ends refer to themselves as the “Jack Boyz” , not to be confused with the Tax Boyz or the Breadwinners.   Standberry also raved about Crum and the fact that he is ready to go and that we all should expect big things.   Throw in transfer Jordan Davis and true freshman Kemari Averett and I have reason to believe him.

Fellow TCZ staff member TBG once labeled Crum as “Baby Shockey” after former NFL tight end Jeremy Shockey. The two have similar styles of play as they both love to deliver crushing blocks and run guys over in the process. We can only hope Crum finds himself in the same company.  Bobby Petrino is known as a great developer of quarterbacks but people fail to realize those who play the tight end position normally thrive in his system as well.  Gary Barnidge, Adam McCauley, Scott Kuhn, and Gerald Christian all saw success with Petrino coached teams so it is safe to say Crum is in the best hands possible.

In 16 days the Cards will open up the 2017 season against Purdue.  Here’s hoping Crum makes those who forgot about him quickly remember…….Too Hype is back.