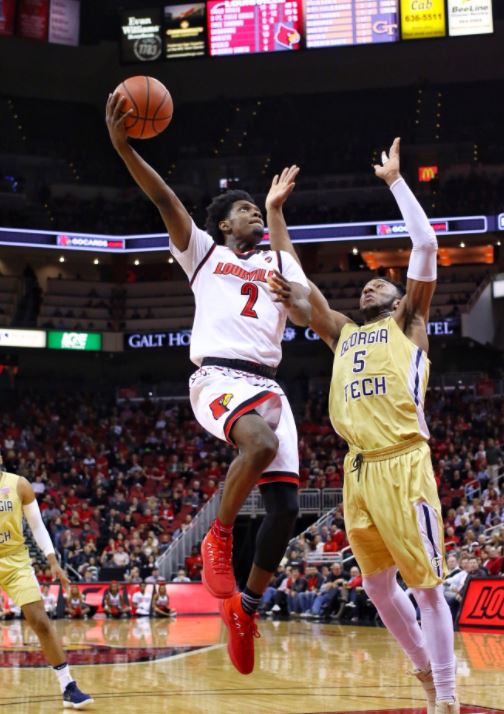 The Cards used a hot shooting night by some bench players and some strong defense down the stretch to end thier losing streak at 3 after beating G-Tech 77-54 before an crowd of 16,533.

Missing Deng Adel who was out with an ankle injury, the Cards rode the hot shooting of Jordan Nwora and relied on their bigs to put away the Yellow Jackets and improve their record to 17-8 (7-5).  Both Ray Spalding and Malik Williams finished with 11 points each and Anas Mahmoud would add in 12 points to help the Cards coast to victory.

Georgia Tech was led but Josh Okogie who scored a game high 25 points. The Cardinal defense shut down big man Ben Lammers who would only score 2 points on 1-8 shooting.   Tech’s head coach Josh Pastner found himself in a tough situation away from the court when it was announced before the game the a sexual harassment suit was filed against him.  The suit was posted on social media detailing the acts he was accused of. He was unavailable for comment after the game.

Louisville shot 50% from the field including 60% from the three point line to go up big at halftime. After a late surge by Georgia Tech, the cards used another run to put them away for good.

The Cards face Pitt in a rematch on Sunday at 1pm, a game they won 77-51 on January 3rd.  Pitt is the only team in the league that has yet to win a conference game. They currently sit at 8-17 (0-12).  The Cards will try to increase their winning streak to two.

Here are your stats: