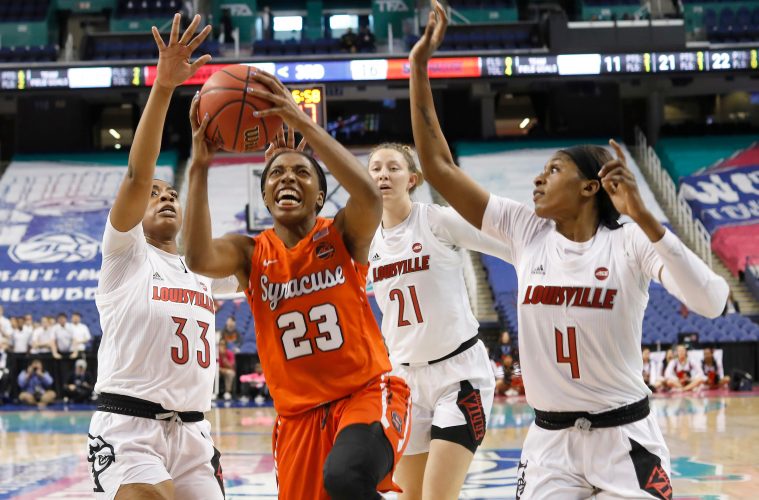 RECAP: WBB Advances To ACC Semifinals With 71-46 Win Over Syracuse

If the Louisville women’s basketball team were a nation-state they would definitely be subject to an arms control treaty of some kind. One wonders if Jeff Walz is surreptitiously working to stockpile centrifuges and uranium for his secret weapons development laboratory. How else could one explain the sheer number of weapons in the Cardinals arsenal?

Missing a key component in early February, the Cardinals fell to the manic Orange in Syracuse as Elizabeth Dixon played with the Nigerian team. Dixon’s return, a rain of threes, and an exemplary display of defensive prowess led the Cards to a 71-46 victory over Syracuse and a rematch with Florida State in the semifinals.

An inauspicious beginning had Dana Evans controlling the tip before throwing the ball away on an attempted pass to Kylee Shook in the post, but that had no bearing on the overall performance. By the first media timeout the Orange were just one of seven from the field with four turnovers. Louisville failed to immediately capitalize due to a slow offensive start but the defense was the difference.

The only smudges on an otherwise perfect performance were foul trouble for Kylee Shook and Mykasa Robinson and eight first half turnovers. Syracuse’s strategy was focused on creating mismatches against Shook and Dunham in the post to exploit the agility of the Orange’s Lewis and Washington. Liz Dixon was called upon to step into the breach and did so with style and aplomb. By the end of the first half the Cards had three steals, three blocks, and were holding Syracuse to just 17% from the field on 29 attempts.

The halftime margin of 34 to 13 could have been more drastic but for some weak shot attempts from the Cardinals. The inside out game was working but a failure to use the backboard and play well in space led to some missed buckets. Compensating for the imbalance was Dana Evans shooting well from beyond the arc. The junior ACC Player of the Year went three of six from three point range in the first half before finishing six of eleven and with 23 points to lead all scorers. Evans credited the total team effort.

“I got more easy shots this game but I credit my teammates for looking for me and getting me those open shots. Defensively we got the ball out and rebound and had were able to push the ball so they weren’t able to set up in their zone as quick.”

Not content to let their leader have all the fun, six other Cardinals hit from three point range. One in particular stood out as Bionca Dunham hit her first career three point basket in the third quarter, much to the delight of the Louisville bench.

“It was low shot clock. I got the ball from Elizabeth Balogun. She passed it to me, she said, ‘Five seconds!” so I caught it, I looked at the rim, and I just shot it.”

The Cards finished 12 of 23 overall from three point range and shot 43% overall when all was said and done. Out of 71 points, however, 25 came from second chance attempts. Louisville was well aware of the need to win the battle on the glass and did so in resounding fashion, grabbing an impressive 53 rebounds to Syracuse’s 31.

The Louisville pressure shut down the normally impressive Emily Engstler who may have also been struggling after rolling her ankle against Virginia on Thursday. Orange guards Kiara Lewis and Taleah Washington were left free to roam but were often forced into tough shots that never started falling. Lewis would be the only Orange player that finished in double figures, with 18. Syracuse ended up shooting just 27% from the field, but that may not have been enough for Walz.

Kylee Shook’s early foul trouble robbed her of the time needed to notch another double-double so it was left to Jaz Jones to take the laurels with a 11 points, 10 rebound performance. Shook didn’t finish far behind with 10 points and 8 rebounds, but the bulk of scoring came from Evans while the remainder was a total team effort. The performance was so dominant that even during a period of discombobulation late in the third and early in the fourth quarter, the lead never dropped below 20.

One piece of seemingly unnecessary spice was a fourth quarter technical foul on Jeff Walz. It’s possible he didn’t have the best angle as Elizabeth Balogun was whistled for her third foul after extending her forearm dribbling up the court. The words, “Are you kidding me? What the f**k?” echoed throughout the Greenboro Coliseum and Syracuse earned two free throws out of it. The ending, however, had long been determined by that point. With about three minutes to go Walz let Molly Lockhart, Lindsey Duvall, and Jessica Laemmle get some minutes and rested his starter’s legs. Syracuse’s Quentin Hillsman subbed his seniors in with about a minute and half to go and the game was conceded.

Top-seeded Louisville now faces the fourth seed Florida State. The Seminoles advanced to the semifinals with a dominant 76-47 over the cinderella thirteen seed Wake Forest in Friday’s first game. Like the Cards, the ‘Noles rained down threes going 10 for 17 with 8 of those coming in the first half alone on 10 attempts. FSU’s size and ability to play inside out is quite similiar to Syracuse’s so it’s left to wonder whether the Cards can put together a similiar performance on Saturday at noon. While the Cards did fall to FSU during the regular season, it was without Elizabeth Balogun.

Regardless of anything else, if Louisville is able to play defense the way they have over the past seven games it’s possible that very little could stop them. If that’s the case, see you on Sunday for the ACC Championship and then beyond. Walz perhaps has his eyes set on some of the teams out west.

“I watch all the stuff that goes on and Oregon is having a fantastic season and they talk about their one loss in November but they won’t ever say who beat ’em, I think it was us. I would love to get the chance in the future to possibly play them again. We are 2-0 against Sabrina, that’s not too bad!”