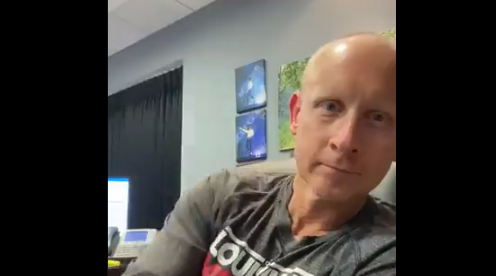 I keep getting asked, “Coach. Are. We. Playing. The Game. Are you scared? Are you a CHICKEN? You won’t play KENTUCKY!?”

Never mind the fact that December 6th game got cancelled, no trip to London? Can we play that game on the 12th?

Never mind the fact that they scheduled Notre Dame in lieu of playing us on the mutually agreed upon date of December 12th.

Never mind the fact that they called ESPN and tried to change one of OUR ACC games without our knowledge or PERMISSION!

Never mind the fact that Coach Stoops and his football program at the University of Kentucky honored that request in football, to move Louisville’s home game from 2020 to 2021…. if you can do it in football it seems like you could do it in basketball.

Never mind the fact that the University of Cincinnati asked us to do the exact same thing that we are asking Kentucky to do…. and we honored that request.

Listen I don’t want to stand in the way of college basketball’s best rivalry. Whatever is most convenient for Coach Cal (slams fist on the table)…. we’ll do it!

Earlier in the day, Kentucky Basketball Coach John Calipari had this to say about the rivalry game and the series.

I know there was a question on the Louisville game. We have the date and the time unless that changes… if they choose not to play. Then we’ll plug in another team….we already had that team set. So where we are you guys know I like to be ahead of this, you are not going to throw the fire hose at me and its hitting me in the nose and mouth and I’m trying to figure out a schedule. I’m not going to do that.

Later in the video back to Louisville:

Calipari: It’s you know, I’m not going to tell you what they are thinking or what they are doing. I just know, you know the terms of the contract we go there and they come here next year. How about if, does anybody really know what this virus is going to do? I mean what if next year we are in the same boat and then we’ve got them at home with no fans. WE DON’T KNOW. This virus is running us we are not running this virus….. and so you know you’d have to talk to them.

My hope is that we are playing the game this year. But we’re prepared if not, I’m not going to wait and they tell me BOOM, they say “No” Bang! We’ve got another home & home. Here it is. You know we’ve got people, you know that people want to play us. You know, they want to beat Kentucky. They want to go again…… so it’s, it’s you know…. I think the game is good for our state. It should be played, but I’m not….. I’m running Kentucky’s program. That’s what I do. I’m not telling any other program what they should or shouldn’t do.