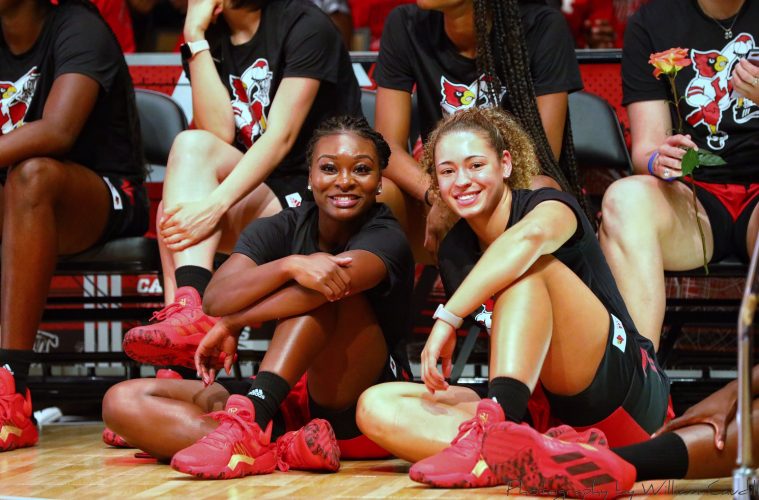 “Why do we fall…? So that we can learn to pick ourselves up.”

Perhaps it’s fitting then that Jeff Walz carries his wounded Cardinals back to his old home in Northern Kentucky to set things straight. Louisville travels to face the Norse on Sunday after a wake-up call at Ohio State handed the (currently) #2 team in the country its first loss of the season. While sure to drop ranking-wise the Cards need not feel alone their dejection as the ACC fared quite poorly in the Big Ten/ACC Challenge. Just five of 14 ACC teams managed to best their Big Ten opponents last week.

Jeff Walz, of course, hails from Fort Thomas and is an NKU alumnus but the connections run slightly deeper than that. The Norse are commanded by fourth year head coach Camryn Whitaker who, along with Walz, has a degree from and time as an assistant at her alma mater Western Kentucky.

Whitaker’s tenure in Highland Heights hasn’t been marked by superlatives with a 33-66 overall record but the Norse are returning the bulk of their offensive talent from the 2018-2019 season. Things got off to a rocky start with four straight losses but NKU has since rattled off four straight wins and look to be turning things around.

Leading that turnaround from the back court are Ivy Turner and Molly Glick. Turner is a standout freshman out of Danville, KY averaging 30 minutes per game. The 5’5″ guard does, however, show her youth with a propensity to turn the ball over. Glick, on the other hand, is a redshirt senior pre-season All Horizon League guard who recently notched her thousandth career point. The 5’11” Fostoria, Ohio native is averaging 15 points per game but is a bit of a jack-of-all-trades as the team’s third-leading rebounder as well.

Over the past four games the Norse have relied more heavily on their defensive efforts with a focus on creating turnovers. Some of the younger Cardinals have been struggling of late so that may present an opportunity for the Norse to keep things close.

Back On The Norse

Louisville looks to bounce back quickly after the setback in Columbus. As strange as it may sound, Jeff Walz might be relieved after the Cards dropped one to Ohio State. The head coach was clear about still having many outstanding questions regarding his team’s focus and perhaps this is just the humbling early-season experience that he was looking for.

A comment that stuck out from Thursday night was the fact that the Cardinals looked like a team that didn’t know what was working. It’s tough to say whether a game against the over-matched Norse will give Walz the educational opportunity he’s looking for, but it does present another chance to work out the kinks. Looming just ahead is the ACC conference schedule with in-state rival Kentucky standing at the gates.