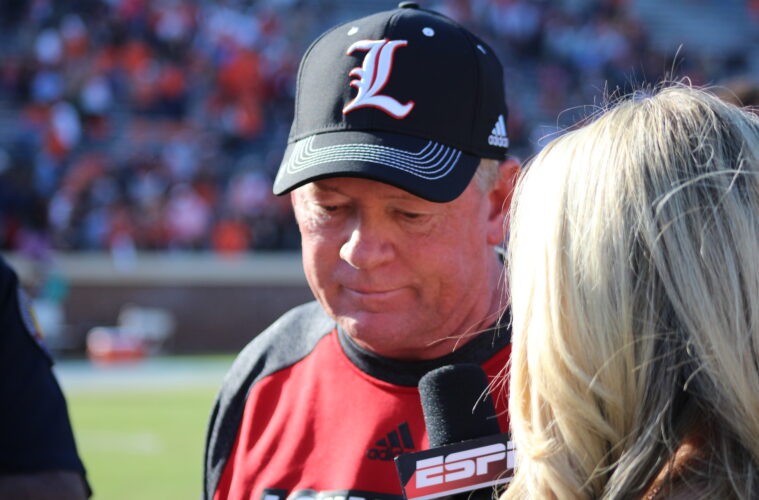 Brown coached safeties last season James Sample (now with the Jacksonville Jaguars) and Gerod Holliman (now with the Tampa Bay Buccaneers).  Holliman set an NCAA record for Interceptions in a single season in 2014 and won the Jim Thorpe Award.  In addition to coaching the safeties Coach Brown also coordinated recruiting (arranging visits) but much of that role has fallen upon Dave Boller in the past year.

We will continue to monitor who Coach Petrino might tab as his new Safeties coach OR if Petrino elects to elevate Terrell Buckley to control the entire secondary and perhaps add a Tight Ends coach.  Brown did not do a great deal of recruiting himself, so it will also be interesting to see if Petrino looks for an active recruiter as well.

Additionally, it is yet to be seen how this move will affect the decision of Safety Josh Harvey-Clemons who is considering the draft.

Here is the Full Release from Missouri:

University of Missouri Head Football Coach Barry Odom has added Greg Brown to his new coaching staff, as announced today. Brown will serve as Mizzou’s cornerbacks coach, and he comes to MU with a long resume of success coaching the secondary at both the collegiate and professional levels, including defensive coordinator stints at both Arizona and Colorado. Two of his pupils (1992-Deon Figures/Colorado and 2014-Gerod Holliman/Louisville), have won the Jim Thorpe Award, given annually to the nation’s best defensive back, while a third he coached for three years won the same award the year after he moved to another job (1994-Chris Hudson/Colorado).

He’s coming off a very successful two-year stint at Louisville, where he coached the secondary and served as recruiting coordinator for the Cardinals, who have gone to a pair of bowl games after posting records of 9-4 (2014) and 8-5 (2015). Details of Brown’s contract will be released once fully executed, along with the completion of human resources procedures.

“Greg’s experience is unmatched around the country, and the success he’s had with the guys he’s coached at every level is so impressive,” said Odom. “He always produces very well-coached players who compete at the highest level, and he’s got a tremendous track record of developing guys to play at or above their top level. His experience and leadership will be great assets to add to our staff. I’ve known him for a long time, and he’s recognized as one of the best in the business at what he does. He’ll bring a tremendous amount of knowledge and respect to our program and university,” he said.

“I’m really excited to be part of the University of Missouri and to go to work with Barry Odom and the talented staff that he’s putting together,” said Brown. “I’ve been very impressed with the success he’s had throughout his career, and I can’t wait to get in and help build on the great defense he put together last season. I’ve always been aware of the great tradition at Mizzou, and that dates back a long time. I’ve seen what kind of passion Mizzou’s fans have for their program, and I’m looking forward to being part of that,” he said.

Brown joined Louisville for the 2014 season, and both of his starting safeties ended up as NFL draft picks. James Sample, who led the Cardinals in tackles that year, was a fourth-round pick of Jacksonville, while safety Gerod Holliman tied an NCAA record with 14 interceptions, and was a seventh-round pick of Pittsburgh.

Brown guided Holliman, who was a consensus All-American, to the Jim Thorpe Award for the nation’s top defensive back. He was also a finalist for the Bronko Nagurski Award, given to the country’s top defensive player. Brown came to Louisville after coaching the secondary at Alabama in 2013 under Nick Saban and tutoring Ha Ha Clinton-Dix, a first round pick of the Green Bay Packers that season.
In his accomplished career at the collegiate and pro level, Brown has mentored some outstanding players in the secondary, like All-Pro Rodney Harrison with the San Diego Chargers and outstanding NFL players like Scott Case, Lance Shulters, Kevin Ross, Merton Hanks, Samari Rolle, Blaine Bishop and Marcus Robinson. During one of his three stints at Colorado, Brown guided Deon Figures to the Jim Thorpe Award in 1992. Overall, he has coached five all Big Eight or Big 12 performers, six draft picks and 15 NFL All-Pro performers.

He also tutored a pair of young cornerbacks in Jimmy Smith and Jalil Brown, with Smith a two-time All-Big 12 performer. In 2005, Brown wrapped up his fourth and final year as a defensive assistant with the NFL’s New Orleans Saints under coach Jim Haslett. The Saints 2005 pass defense ranked third in the entire NFL, allowing only 178 yards per game.

Brown, who spent the 2011-12 seasons as the defensive coordinator at the University of Colorado, also was the co-defensive coordinator at the University of Arizona in 2010. Brown was part of a resurgence of the Wildcat football program into the top 25 rankings for the first time in a decade and helped lead the Wildcats to an appearance in the Alamo Bowl. Under Brown’s tutelage, the Wildcats were ranked 33rd in the nation in total defense and held five opponents to 14 points or less during the year.

Brown spent four years in Boulder (2006-09), the last three as the passing game defensive coordinator. It was his second stint at Colorado, following and preceding National Football League jobs with six different teams for 15 years.

Brown joined the CU staff under new coach Dan Hawkins following the completion of the 2005 National Football League season. In his first two seasons at Colorado, he helped tutor Terrence Wheatley, coaching him to first-team All-Big 12 honors and a second round NFL draft pick by the New England Patriots. In his final year he coached Cornerback Cha’Pelle Brown to second-team All-Big 12 honors, with three other secondary players earning honorable mention status.

Brown rejoined the Atlanta Falcons as secondary coach for the 2000 and 2001 seasons after spending the 1999 campaign as the defensive backs coach for the San Francisco 49ers.

He spent the 1995-96 seasons as the secondary coach for San Diego, with the Chargers finishing in the top five both years in fewest yards allowed per completion, where he came in contact with Harrison, who eventually would become one of the league’s top safeties. He moved on to the Tennessee Oilers, coaching the secondary in both 1997 and 1998.

In his first stint at Colorado, Brown helped Colorado lead the nation in pass completion defense and the Big Eight in pass defense in 1992. Brown joined the CU staff days after the Buffs won their first national championship (January 7, 1991). He returned to the NFL in 1994, joining the Atlanta staff as defensive backs coach. The Falcons finished second that season in the league with 23 interceptions.

Brown started his coaching career in 1981 as a graduate assistant at the University of Texas-El Paso, his alma mater, where he worked with the secondary. The following year, 1982, the Arvada, Colo. native came back to his home state, serving as a defensive coach at Green Mountain High School in Lakewood.

His first stint in the professional ranks came the following spring, with Brown joining the staff of the Denver Gold of the United States Football League (USFL). He coached the secondary for the Gold for two seasons (1983, 1984) before moving on to the NFL for the first time in the summer of 1984, joining the Tampa Bay Buccaneers staff. For the Bucs, he coached three different positions: defensive quality control (1984), offensive quality control (1985) and the U-backs/tight ends (1986). Brown returned to the college game in 1987, coaching the defensive backs for two seasons at the University of Wyoming before doing the same at Purdue for the 1989 and 1990 campaigns. He then returned home to Colorado for a second time in joining McCartney’s staff in 1991.

He graduated from UTEP in 1980 with a bachelor’s degree in education (history/physical education). At UTEP, Brown lettered twice at cornerback. He earned his A.A. degree from Glendale (Ariz.) Junior College in 1978. Brown graduated from Arvada (Colo.) High School, where he lettered in both football and track.

His father, Irv Brown, is a long-time Denver radio personality and the former head baseball coach and one-time assistant football coach at the University of Colorado. He is married to the former Stacie Bible, and the couple has two daughters (Hannah and Grace).