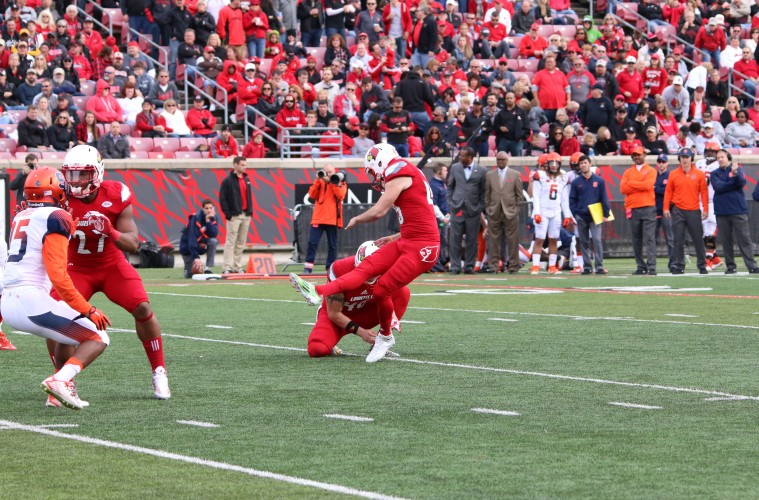 Louisville picked up commitment #22 in the class of 2017 over the weekend with long snapper Mitch Hall announcing his commitment to the Cards. What did the #2 rated long snapper in his class like so much about UofL?

“All that Louisville has to offer is off the charts in all areas, academics, sports, and campus life” Hall said, “But the biggest thing was doing a lot of praying and thinking and going wherever God was going to lead me!”.

At a position in which most fans take for granted, Hall is a cut above the rest and there is a reason why Louisville chose to offer him a scholarship.

“Well, now the athletes are so fast and quick to react a tight end turned snapper won’t cut it anymore.” Hall stated, “So that’s why coaches now recruit and will actually offer a specialist a scholarship.”

Not only has the 6’3″ 205lbs prospect from Clayton, North Carolina received full scholarship offers from Louisville, Memphis, and Pima CC, he has also been offered a preferred walk-on spot at Tennessee, Florida St., Miami, N.C. St., and Penn St.

While it is hard to put into to words Hall’s snapping ability the one way we do have to evaluate it is by how fast he can snap it.

One factor in Hall committing to Louisville was the coaches at the school, including his recruiting coach, Coach Tony Grantham. “Coach Grantham and I get along great! I can’t wait to get the chance to be at Louisville working with him.” Hall stated.

Along with Coach Grantham, Hall is excited to play for Coach Petrino as well “Coach Petrino is great, he’s an awesome person and a better coach. It’ll be an honor playing under he and his staff.”

While a long snapper may not be the flashiest commitment Louisville football has ever had, Mitch Hall is an absolute stud at his position and his abilities will be quite useful on both punts and field goals in the near future for the Cards.