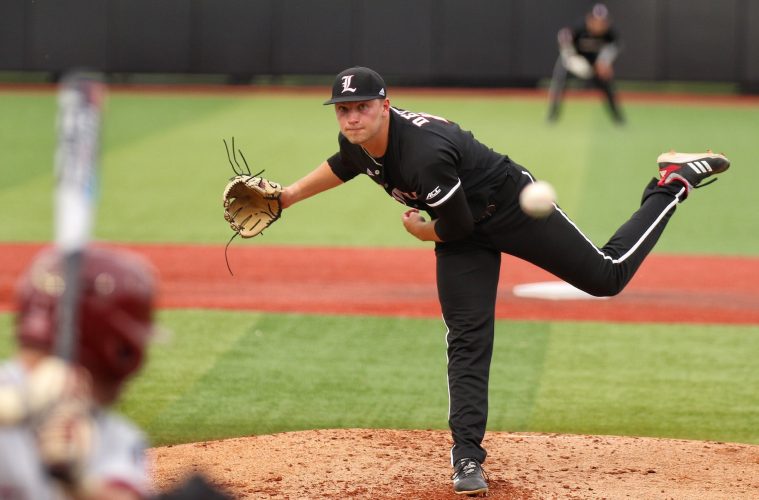 The sophomore southpaw has been an unstoppable force on the mound all throughout the 2019 season. His 138 strikeouts, 2.42 ERA, 0.83 WHIP, 11 wins and .170 opponents batting average all lead the ACC, with his WHIP, strikeouts, strikeout-to-walk ratio and wins all top 10 marks nationally. Striking out double digit batters in 8 of his starts, he is just 8 strikeouts shy of the UofL single-season strikeout record of 146 set by Brendan McKay in 2017.

Winning ACC Pitcher of the Week twice this season, the Chatham, IL native has received his fair share of national recognition as well. He was named the Pitcher of the Month for the month of March by the NCBWA, and was tabbed the Midseason Pitcher of the Year by both Perfect Game and D1Baseball. Recently, he was also named a semifinalist for both the Golden Spikes Award and the Dick Howser Trophy, two of the most prestigious individual award in college baseball.

Reid Detmers and the rest of the Louisville Baseball program are set to begin their postseason run with ACC Baseball Championship pool play on Wednesday, May 22nd at 11am against the #12 seeded Boston College Eagles (29-26, 12-18). Louisville will then be back in action on Thursday, May 23rd at 11am against the #8 seeded Clemson Tigers (33-23, 15-15). Both of Louisville’s games will be televised on ACC Network Extra/Fox Sports South, and will be broadcast on 93.9 The Ville. All 15 ACCBC games, including Louisville’s, will be played at Durham Bulls Athletic Park in Durham, NC.