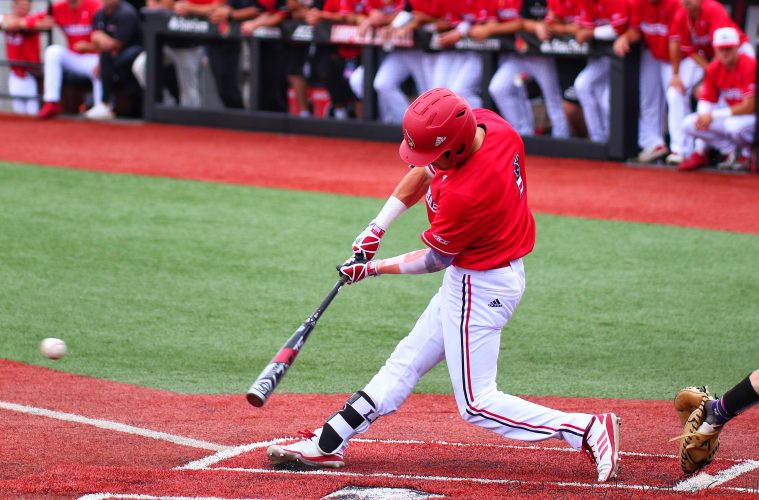 In a game that lasted just shy of 24 hours, the Louisville Cardinals (50-17) staved off elimination as they defeated the Auburn Tigers (38-28) in a game that was full of late inning drama. The Cardinals were forced to shut out a pair of furious rallies by the Tigers, as Auburn collected 5 base hits in the final 2 innings of play including having the bases loaded.

In the opening frames of the contest, the Cards played with a monumental amount of energy and effort. Taking an aggressive approach at the plate, junior shortstop Tyler Fitzgerald helped give Louisville an early lead as he homered on the second pitch of his at-bat for his 8th home run of the year and team-best 65th RBI.

Conversely the energy was also a detractor for Louisville at times as well. The Tigers were able to get a pair of runners in scoring position after junior outfielder Drew Campbell mistimed his dive for a fly ball instead of meeting it in the outfield in hopes of cutting off base runners. Auburn would draw a groundout on the next at-bat to allow the runner at third to come home and tie the game up.

Heading into the fourth inning, both teams started to have to deal with adverse weather as a steady rain fell over TD Ameritrade Park. Having played in rain nearly all season, Louisville was ready while it appeared that Auburn was not. The Cards pulled ahead thanks to a bases loaded walk from junior second baseman Justin Lavey, then a double infield error with two outs allowed Louisville to put up their first crooked number inning of the College World Series

Unfortunately with the conclusion of the fourth inning, the rain falling over Omaha would be strong enough to warrant the grounds crew grabbing the tarp and delaying the game. Play would not be resumed until the next day, 22 hours after the game had started. Once the Cards got back on the diamond, head coach Dan McDonnell would be forced to insert Adam Elliott to “relieve” Bobby Miller because of the delay. The junior left-hander put up a very solid middle relief effort as he tossed 3 strikeouts in just 2.0 innings on the mound. Comparatively speaking, Miller had the same amount of strikeouts in double the innings.

However, Coach Mac would decide to go with a new pitcher in the seventh despite Elliott’s production. Junior right-hander Michael McAvene took to the mound, making his first appearance since his June 2nd ejection vs. Indiana in the Louisville Regional. Auburn welcomed the pitching change, getting back-to-back base hits for a run after McAvene had retired the first couple batters he faced.

Countering the run scored against them, Drew Campbell was able to give the Cards some much needed insurance runs and extend the lead back out to 3. With runners on the corners and no outs, the junior outfielder would poke a ball into left field to allow fellow outfielder Jake Snider to come home. While they extended the lead back out, it would be the only run scored in the inning as Louisville would miss a major opportunity to put some distance between them and the Tigers.

A rally seemed inevitable for Auburn, as they were able to get the eighth inning leadoff man on base. The Tigers grounded into a double play but then fired off three straight singles to load the bases with two outs. In what was arguably the play of the game, McAvene was able to collect himself after a mound visit from pitching coach Roger Williams, and struck out the final batter of the inning without surrendering a run.

With his pitch count inflating higher than that of Elliott’s, this would be McAvene final action of the afternoon, Sophomore left-hander Michael Kirian would start out the ninth inning, becoming Louisville’s first pitcher of the CWS to pitch in multiple appearances after closing vs. Vanderbilt on Sunday. The second batter that Kirian faced, Auburn’s Conor Davis proceeded to go yard and strike a solo home run to cut the lead to 2. They would also scrape together a 2-out double but Kirian would strike out the final batter to clinch the victory.

Louisville is set to take the diamond again tomorrow at 8pm ET. They will face the loser of Vanderbilt vs. Mississippi State, and it will be televised on ESPN2 and broadcast of 93.9 The Ville.