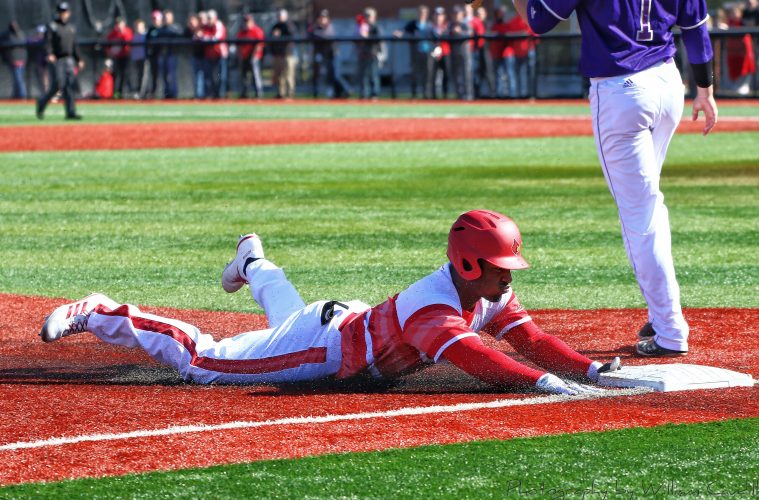 In the final weekend before diving into ACC conference play, the #10 Louisville Cardinals hosted the Southern Conference’s Western Carolina Catamounts and greeted them with a 3 game sweep at Jim Patterson Stadium. The sweep moved the Cardinals to 11-0 on the season, marking the third best start in program history under head coach Dan McDonnell (2010: 13-0, 2017: 19-0). Louisville’s next action will come against the Morehead State Eagles, this Tuesday at 3pm at Jim Patterson Stadium.

In the first ever matchup in program history against Western Carolina, the Cardinals cruised to a 16-4 victory over the Catamounts behind a quality start from Adam Wolf and a good effort from the starting lineup as well as the backups. Louisville would end up with a higher win margin (12) than the amount of runners they left on base (10).

Making his third straight series opener start, while he was racking up strikeouts as per the usual, junior left-hander Adam Wolf didn’t have quite the smoothest start to the contest. The Catamounts’ bats were hot right out of the gates, putting up 4 runs and drawing 4 walks in the first couple innings. Finding themselves in another early deficit, the Cardinal Nine wasn’t held in check for long. They responded furiously with a 7-run third inning, highlighted by designated hitter Danny Oriente’s 2 RBI single and three straight RBI singles that blew by Western Carolina’s third basemen. Oriente found his way into the lineup for the first time since 2017’s opening weekend after he had suffered a season ended injury.

Despite the shaky start to the game for Wolf, Coach Mac didn’t jump the gun early and stuck with his ace. It paid tremendous dividends as he faced the minimum batters over the next 4 innings and also featured a stretch where he retired 7 straight batters. During these middle innings, the Cards’ hitters helped Wolf’s cause by providing him with some insurance runs, especially sophomore third basemen Justin Lavey. He drove in a pair of runs with a line drive in the fourth inning, then drove in another run in the sixth.

With a sizable 11-4 lead heading into the seventh inning and 95 pitches under his belt for the game, Adam Wolf’s day was done and freshman left-hander Michael Kirian took his place on the mound in relief. Wolf would end the day with 7 strikeouts to 1 walk and 4 earned runs over 6.0 IP. Kirian would pick up right where Wolf left off, and throw a scoreless seventh and eighth inning, including 3 strikeouts. Despite it being the late innings, Louisville refused to take their foot off the gas. They plated 5 runs in the final two innings highlighted mostly by the subs, including a Zach Britton sacrifice fly RBI and an Ethan Stringer 2 RBI single. When the Cards were done raining all over the Catamounts, freshman lefty reliever Gavin Sullivan was tasked with pitching the final frame, and did so without surrendering a run.

When they found themselves in a 3 run hole after a disastrous fifth inning, the Louisville Cardinals clawed their way back into the game and capped off the contest with their first walk-off win since May 2017. Tied 7-7, sophomore first baseman Logan Wyatt drilled a line drive right up the middle with the bases loaded in the bottom of the ninth to secure Louisville’s 10th win and preserved their perfect record in the 2018 season.

Louisville made their way to the scoreboard first, partly in part thanks to some throwing errors in the fourth inning that allowed junior infielder Devin Mann and sophomore outfielder Ethan Stringer to come home. Singles by Pat junior catcher Rumoro and junior outfielder Josh Stowers also contributed to the cause, helping the Cards extend to an early 4-0 lead after four innings.

However, that lead would not last long. While starting pitcher junior right-hander Riley Thompson had held Western Carolina scoreless through 4 innings, he struggled with his command at times, and it came to a head in the fifth inning. 6 of the 7 batters he faced in the fifth inning safely reached base, with the final nail in his coffin being a 2 RBI triple to make it a 6-4 game. Coach Mac quickly made the call to the bullpen, and sophomore right-hander Shay Smiddy would enter the game, and get out of the inning only allowing one additional run.

Smiddy would be a much added boost to Louisville’s chances at winning the game, as he would go 3.1 innings and only allow 2 hits and 0 walks while striking out 5 batters. While he was busy tossing scoreless innings, the Cardinal Nine got to work clawing back into the game. Immediately after the Catamounts’ 7 run inning, Josh Stowers responded with a deep triple to right center field, and was sent home off sophomore designated hitter Jake Snider’s sacrifice fly. Next up in the sixth inning, two straight doubles by sophomore third baseman Justin Lavey and freshman outfielder Lucas Dunn would pull the deficit to just 1, and a ground out RBI by sophomore shortstop Tyler Fitzgerald would knot the game up at 7 runs a piece.

Going into the bottom of the ninth, All-American junior right-hander Sam Bordner had done his part in place of Smiddy, keeping Western Carolina off the board for 1.1 innings and setting up a potential walk-off situation. Josh Stowers, Jake Snider and Danny Oriente would all make it on base to load them up for Logan Wyatt. He would not disappoint, as his single would prevent the game from going into extra innings and secure a Cardinals victory in dramatic fashion.

The Cardinal Nine ended their third weekend of the season with their third straight sweep in a game that didn’t feature much offensive. Louisville only mustered 4 hits, but were able to take advantage of some Western Carolina errors to make sure that they ended up on top.

Although they did not register a hit until the fourth inning, the Cards established an early lead over the Catamounts thanks to a few defensive miscues. An error to get junior outfielder Josh Stowers on base, followed by a couple stolen bases on his behalf set up an RBI sacrifice fly by junior second basemen Devin Mann in the first inning, then a couple balks in a row after sophomore shortstop Tyler Fitzgerald walked in the third inning set up an RBI groundout by Josh Stowers.

Starting pitcher junior right-hander Liam Jenkins had trouble with command early in the game, walking four batters though the first three innings of the game. Though he was able to regain some of his control, as he only surrendered 1 run and struck out 6 batters by the time his start had ended after the third inning. Senior left-hander Rabon Martin would relieve him in the fourth, but would be replaced in the fifth as he would give up 1 run off 3 hits in just 1 inning of work. Left-hander Reid Detmers, one of the many freshmen on the roster, would give the pitching a much needed boost for the game, as he would strikeout 7 batters including all 3 batters faced in the sixth inning.

A leadoff triple in the bottom of the sixth inning from Mann set up a go-ahead RBI single from sophomore outfielder Danny Oriente, but the Cards would not be out of the woods just yet. The Catamounts threatened in the eighth inning with runners on the corners and two out, but freshman right-hander Bobby Miller was able to work his way around the batter and escaped the inning still with a 1 run lead. Sam Bordner would make his second straight ninth inning appearance, and close out the game like he does best to secure the sweep.