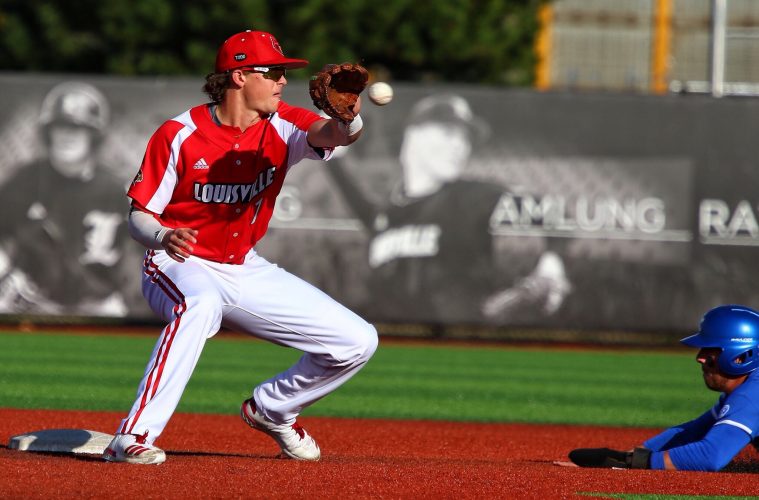 Taking on the # 6 Kentucky Wildcats at home for round 2 of the Battle of the Bluegrass, the #21 Louisville Cardinals returned the favor and dominated the Cats to split the series after the Cards had been dominated in Lexington two weeks prior. The Cardinal Nine soundly defeated Kentucky 8-2, scoring all of their runs in the middle innings including a 4 run fifth inning. Sophomore left fielder Jake Snider had himself a day, leading the way for the Cards with 3 hits and 2 RBI including a home run.

The Cats cracked the scoreboard first off a solo shot to left field from shortstop Trey Dawson, though Kentucky jumping to an early lead wasn’t from a lack of execution from starting Louisville pitcher Reid Detmers. In his third start of the year, the freshman left-hander fanned 5 UK batters through the first four innings of the contest. The Cards weren’t playing from behind for long though. Junior outfielder Josh Stowers and sophomore designated hitter Danny Oriente delivered back-to-back 2-out RBI singles in the bottom of the fourth to give Louisville a 2-1 advantage.

While Louisville could not bring home any more base runners, they knocked out Kentucky’s starting pitcher to force them to utilize the bullpen for the rest of the game. Louisville would have to make an early call to the bullpen as well. Facing a two-out jam, Detmers would be relieved after 4.2 innings, matching his IP career high. Relieving Detmers, sophomore RHP Shay Smiddy would come into the game, and record the final out of the top of the fifth.

The Cards’ offense woke up in the fifth inning, as they were able to plate 4 runs off just two hits in the inning. Sophomore first baseman Logan Wyatt would draw a bases loaded walk, Josh Stowers would beat out a potential double play to bring home another run, Danny Oriente would bring home Stowers off a double, and Devin Mann would steal home off a failed pickoff attempt of Stowers.

The rivalry between these two teams certainly heated up in the sixth inning. After Jake Snider connected on a two-run bomb for his first home run of the season to make it 8-1, Devin Mann took a first pitch fastball off the helmet that resulted in both dugouts being warned and the offending UK pitcher not being ejected. Instead of stooping to UK’s level and retaliating for Devin Mann getting beaned, Shay Smiddy took the high road and let his pitching do the talking. The reliever out of Defiance, Ohio had himself a solid outing out of the pen, twirling 2.1 scoreless innings and striking out 3.

Sophomore right-hander Michael McAvene and freshman left-hander Gavin Sullivan combined to pitch the eighth inning where UK would plate their first run since the third inning, but the 6 run deficit would prove to be a difficult one to climb. All-American closer Sam Bordner took to the mound in the ninth, and was able to keep Kentucky at bay to secure the victory and split the series.