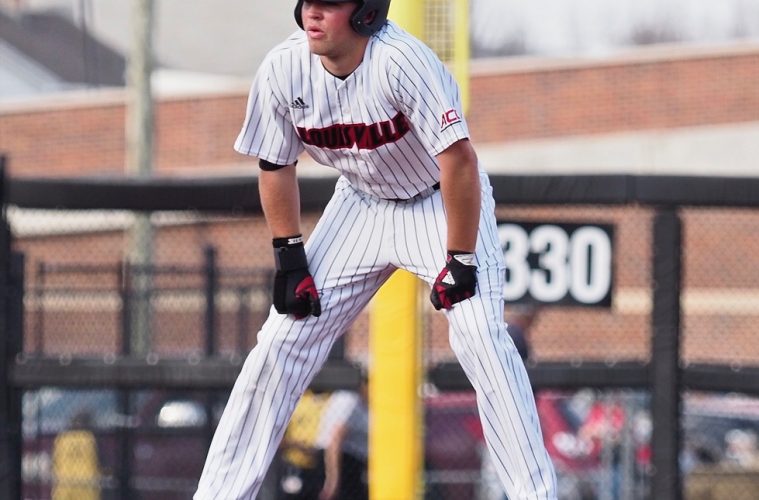 The first home series of 2018 is in the books for the Louisville Cardinals, and it ended in a three game sweep of the Youngstown State Penguins (1-5). Throughout the series, the Cards showed their overall dominance as they outscored Youngstown State 31 – 3, and only allowed 11 total hits. The sweep pushed the Cards’ overall record to 7-0 on the season, and will play their next game against the Xavier Musketeers on Tuesday, February 27th at 3pm, here at Jim Patterson Stadium.

In his second straight Friday-game start, junior lefty Adam Wolf set the tone for the game as he and two other Cardinals pitchers combined to pitch the first shutout of the 2018 season, coming in the home series opener against Youngstown State.

In a game where the Cards were able to put 11 runs on the board, saying that Wolf was the one who shined the brightest speaks to the effort he gave on the mound. He pitched 7.0 scoreless innings while allowing only 2 hits, no walks and striking out 6 batters. Even more impressive, his 2 hits given up came in the first two innings, so he was able to force Youngstown State to go 3 up, 3 down in five straight innings.

When it was time to call to the bullpen, they did not disappoint either. Going with the young theme of this team, sophomore lefty Stewart Currie made his collegiate debut in the eighth inning and was also able to keep the Penguins off the board. Fellow lefty freshman Gavin Sullivan took over in the ninth inning and finished what Wolf started by not tossing a perfect ninth inning to shut the door.

The Cards’ bats definitely gave the pitching staff a worry free game, as they were able to keep a sizable lead for most of the game. They really opened up the game in the third inning when they hung up 5 runs, sparked by a Justin Lavey 2 RBI home run off an 0-2 count. Two straight singles would leave two runners in scoring position for sophomore shortstop Tyler Fitzgerald, and a single by him would send one runner home. Fitz then showed off his wheels and stole both second and third base, with a Josh Stowers sacrifice fly finally sending him home to cap off the 5 run inning.

They also made sure there was no doubt in their minds they were winning when they put up 3 runs in the seventh inning, capped off by Josh Stowers’ RBI triple on a full count. When everything was said and done, the Cardinal Nine forced the Penguins to make 4 pitching changes, with no YSU pitcher going more than 3.0 innings.

Following the shutout performance against the Youngstown State Penguins in their series opener, Coach Mac’s Cards followed that one up with a near shutout as they continued to pile on the scoreboard in a game that was anything but dry.

Though he was not as crisp as Adam Wolf was in the game prior, starting right-handed pitcher Riley Thompson was also able to go his entire appearance without giving up a run. He gave up a couple early walks, but after the first inning he would get right back to business. In his five inning outing, he would log a final stat line of 5.0 IP, 3H, 0ER, 2BB, 4K before it would turn into a bullpen game.

On the other side of the diamond, sophomore infielder/designated hitter Jake Snider was busy having himself a career day, as he was able to reach base 5 times. He went 2-2 at the plate while matching his career high of 3 RBI, and was also able to draw a career high 3 walks. Not to be outdone by fellow bag snatchers Josh Stowers and Tyler Fitzgerald, he was also able to steal second base twice.

Following the performance put up by Thompson, freshman reliever Bobby Miller worked himself into a bit of a jam in the sixth inning, but was able to work himself out of it, as he  was only able to allow one run to score with the bases loaded. He was able to pitch a scoreless seventh, and graduate transfer from Indiana State right-hander Austin Conway relieved him in the eighth. He too worked himself into a bit of a bases loaded jam on three walks, but unlike his predecessor he was able to not allow any runs with the assist of a couple strikeouts on his behalf.

Meanwhile, like in the game prior, the Cards also logged some insurance runs in the late innings just in case the bullpen was not able to do its job. With the bases loaded in the seventh, a Jake Snider single past the shortstop sent two runners home, then a Devin Mann sacrifice fly and an Ethan Stringer single would send two more runners home to cap off a 4-run seventh inning. Senior lefty Rabon Martin would then make his appearance in the ninth inning in a non-save situation, and close the door on the Penguins with a pair of strikeouts to preserve Louisville’s unbeaten record and move to 6-0.

Under weather conditions that were much better than game 2 of the series, the Cardinal Nine beat Youngstown State in game 3 of the series to complete the 3 game sweep of the Penguins. The young pitching staff continued to get early season reps, as freshman lefty Reid Detmers made his first collegiate start in the series finale against Youngstown State. Detmers’ start marked the fourth time so far this season that a Louisville pitcher made their collegiate starting debut.

Comparatively speaking to his counterparts that started the other games of the series, he didn’t have the greatest of starts. A pair of walks and a balk call in the third inning would allow Youngstown State to bring home a run as well as load the bases, however he would be able to wiggle his way out of the jam he created. Fortunately for the Cards, an RBI single by backup catcher Zach Britton with Justin Lavey on second base in the second inning made sure that when YSU finally found the scoreboard, Louisville did not find themselves playing from behind for the first time in the series.

They might have allowed the game to be tied up in the top of the third, but in the bottom of the inning the Cards quickly rebounded with runs of their own. In the third and fourth innings combined, the Cards got 9 runners on base, including loading the bases twice. Drew Campbell made the most in these two innings, with a bases loaded walk in the third and a single with two runners in scoring position in the fourth. All together over those two innings, the Cards were able to put 6 runs on the board.

Coach Mac finally made the call to bullpen in the top of the fifth after Detmers (4.2 IP, 4 H, 2 ER, 5 BB, 4 K) allowed a home run followed by a pair of walks with two outs to go in the inning. Sophomore right-hander Shay Smiddy entered the game in relief, and delivered one pitch that resulted in a groundout to end the inning. Smiddy was able to keep the Penguins off the board in his 2.1 relief innings, before Liam Jenkins made his first appearance since he gave up 5 earned runs in 0.2 IP against George Mason. Fortunately this time around, Liam tossed a scoreless inning with two strikeouts to help boost his overall ERA.

To put a bow on the first home series of the season, the Cards loaded the bases one more time in the eighth inning, and Devin Mann brought home all the insurance runs he could bring with a deep grand slam over the left-center field wall. To close out the game, freshman lefty Michael Kirian made his way into the game in the ninth inning and shut the door on YSU with two quick strikeouts.