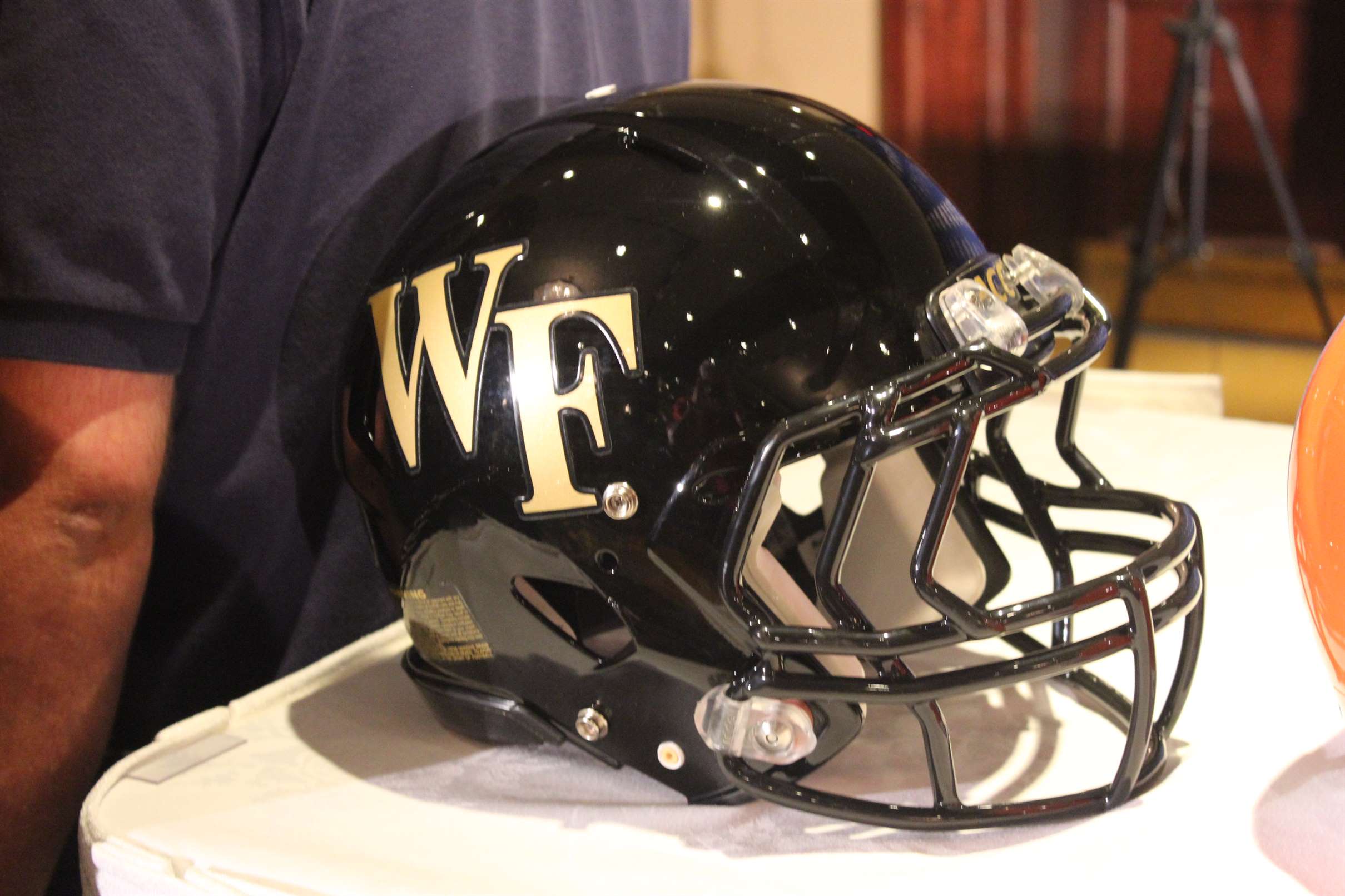 There are tickets available for Louisville vs. Wake Forest HERE

“The Chapel” is mostly aluminum bench seating with the middle sections having individual seating.  There is also “Berm” seating available in the Southeast Endzone known as Deacon Hill.  The stadium is on Wake Forest’s campus.

The weather is expected to be pleasant with a high in Winston-Salem of 66 during the day and a low of 41.  0% chance of precipitation according to Weather.com.

The radio broadcast will be available on Louisville Sports Properties and the Tune In Mobile App.  The legendary voice of the Cards Paul Rogers will provide play-by-play with Craig Swabek providing color and Doug Ormay from the sideline.  Additionally the Cards’ call will be broadcast on Sirius Channel 132 and XM Channel 204.

In Winston-Salem the game will be broadcast on 98.1 FM WBRF-FM with Stan Cotten (pxp), Tommy Elrod (color), and Dave Goren (sideline).  Wake’s broadcast is also available on Sirius & XM.

The Cards vs. Demon Deacons will be broadcast on ESPN2 with Dave Fleming doing play-by-play and Mack Brown providing color.  Allison Williams will be on the sideline providing updates.  UofL vs. WF will also be available on WATCHESPN live and later for on-demand replay.

Louisville needs to win this game.  The Cards have been chasing .500 since Game 1 and Wake Forest even on the road is exactly the type of opponent the Cards need to get it done.  Tough, on the road….and actually quite similar to Louisville.  Louisville is slightly better offensively than Wake Forest, but neither team is really driving the ball on opponents or scoring at a high rate.  The Cards are slightly better defensively but both teams have actually played solid defense (even though we aren’t entirely happy with Louisville’s performance overall due to perceived talent).  But the big difference is Wake Forest’s ability to stop the run as they are allowing 172.50 yards per game.

Wake will play two QBs in this game and they really struggle to run the football even with former UofL commit Matt Colburn…..and Louisville does too if anyone isn’t named Lamar Jackson.  But today I think a Cardinal Running Back breaks out, similar to how Brandon Radcliff broke out last year vs. Wake Forest and Wake continues to struggle on the ground.  I don’t see this as a high scoring affair at all, but I think Louisville’s ability to be better (slightly) in all 3 phases gives UofL an advantage and I think the defense shines tonight.

Wake Forest is a private, research university founded in 1834 as Wake Forest Manual Labor Institute.  It was named because students were required to spend half of each day doing manual labor on the plantation until 1838 and the school’s name changed to Wake Forest College. The school closed in 1862 due to the Civil War before re-opening in 1866.  The decision to move the entire campus from north of Raleigh in Wake Forest, NC to its current location in Winston-Salem in came in 1946. The old Wake Forest campus was sold to the Baptist State Convention to establish the Southern Baptist Theological Seminary and in 1951 Harry S. Truman lifted the first shovel and in 1956 Wake Forest’s move to Winston-Salem was complete.

In 1967 Wake Forest changed its name from Wake Forest College to Wake Forest University.  WFC can still be seen in many pieces of ironwork throughout campus.

Originally Wake Forest’s athletic teams were known as the “Fighting Baptists” or”The Baptists”  due to its association with the Baptist Convention.  Wake also sometimes simply went by “The Old Gold & Black”.  In 1922 Mayor Parker, the editor of the school newspaper said that Wake Forest fought like “Demons” vs. Duke (the Trinity), giving rise to the nickname “Demon Deacons”.  The Demon Deacon the mascot came to life in 1941 and has gone through several variations…..today he wears a top hat and tails and rides a gold & black motorcycle. Sometimes he carries a walking stick, cane, umbrellas…..and even a plunger.  The plunger is typically used to mock opposing marching bands and as a weapon against Duke’s ‘pitch fork’.

The Original Mascot was a Tiger, thus the colors Old Gold & Black.

Since the 1960s when Wake Forest notches a huge win in any sport, the student population “Rolls the Quad” with toilet paper. Similar to Auburn’s “Rolling Toomer’s Corner” tradition that we explored earlier this year, all available toilet paper is used to decorate the upper quad in celebration.

It is supposedly an unwritten rule that before a student graduates from Wake Forest he/she must streak the main Quad.  The ‘Great Streak of 1974’ saw most of the Wake Forest campus streak the Quad with paper bags on their heads.

There is an arch on Hearn Plaza that is a reproduction of the arch on the original Wake Forest campus.  The original arch was a gift from the Class of 1909 while the current arch is a gift from the Class of 2006.  Each year new students and graduating seniors pass through the arch signifying the begging and end of their respective undergraduate eras.

Walter Raphael Wiley & his wife Monnie Louise McDaniel Wiley wanted to bridge the old campus with the new campus and chose to collect seeds from the magnolia trees on the old campus.  Mrs. Wiley cultivated the seedlings into 5 foot tall magnolias and donated about 20 Magnolia trees that were planted on Manchester Plaza.

There are underground tunnels that connect many of the buildings on Wake Forest’s campus.  The tunnels are closed to public access as they house much of the infrastructure to campus, but the presence of the tunnels, along with a the nuclear fallout shelter in Tribble Hall has given life to many legend.  The largest legend is that the tunnels lead to a command center for the United State’s most important personnel hidden between the academic buildings above the Mag Quad.

Thine is a glorious fame, Constant and true.

We give thee of our praise, Adore thine ancient days,

Be thou our guardian near fore’er and aye.

We bow before thy shrine, Thy brow with bays entwine,