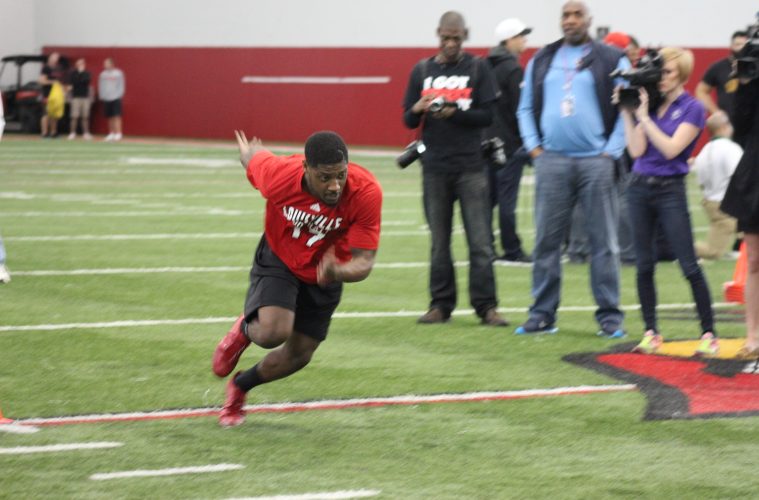 Seven Cards are looking to hear their names called… a few are projected to be drafted in next week’s NFL draft.  Here’s a compilation of the buzz around NFL media and our Cards.

Quick’s father, Rhoniya, played football at Louisville, but James had made his own name as a high school football star. The Associated Press Mr. Football award winner for Kentucky in 2012 caught a touchdown pass in four straight state title games. As a track athlete, he also set a state record in the 200 meters. After learning the ropes as a true freshman in 2013 (6-73 receiving), he became a starter the following year (36-566, three TDs) and contributed as a returner (8-156 kicks; 20-148 punts) even though he was suspended for one game for violating team rules. Quick led the Cardinals in receiving as a junior (39-624, five TDs) and was tops on the squad in receiving yardage in 2016 (45-769, six TDs) on his way to third-team All-ACC honors.

Can secure inside release for post routes through clever set-up on release. Runs routes with consistent purpose and urgency. Varies speed of route to create man-made “burst” within his trek. Route salesman. Generates distress in cover safeties with route work. Utilizes body lean and believable head fakes to create hip commitment from defenders. Quick getting upfield after catch to maximize the play. Tracks the deep throw and adjusts rapidly to underthrows. Subtle route adjustments in space to avoid redirection from zone linebackers. Cover experience on special teams early in career.

Small, thin target. Unlikely catch-and-run option on next level. Too small to fight through tackles after catch. Quicker than fast. Has some build-up speed, but might not be fast enough to threaten aggressive corners looking to squat on routes. Stiff hands can be unforgiving. Finished career with 19 drops against 123 catches. Has focus-drop issues but also struggles to finish catches that are outside his frame. Needs to do better job of working aggressively back to throws. Route separation comes through route work over acceleration from breaks.

Slot corner with average athleticism and quickness and below-average hands. History of drops combined with his thin frame are likely indicators of issues with contested catches on the next level. Will measure shorter than his listed height so he might need a big 40 time to increase his odds of going any earlier than late Day 3 in the draft.

The New York Giants had one of the best secondaries in the NFL in 2016 but that doesn’t mean they aren’t open to adding a player that can help them. Despite having an All-Pro safety along with some promising candidates, the Giants reportedly held a private workout for Louisville safety Josh Harvey-Clemons.

Harvey-Clemons draws comparisons to Seattle Seahawks safety Kam Chancellor, a player most teams would love to have on their roster.

Harvey-Clemons is CBS Sports’ 10th ranked strong safety in this year’s class and is projected to go in the sixth round. If the Giants fill their main needs early on, they could add the prototypical safety on Day 3.

The Giants defense was successful party due to the fact that they were a physical bunch. Harvey-Clemons certainly fits that mold and could be someone to keep an eye on later in the draft.

Harvey-Clemons capitalized on his fresh start at Louisville playing for Todd Grantham, and had 88 tackles, two for losses, three interceptions and six pass breakups in his first season there. Last season, he was second-team all-conference and had 61 tackles, four for losses and two sacks.

from bleacherreport.com – Kristopher knoxLouisville has cranked out some quality NFL defenders in recent years, 2016 first-round pick Sheldon Rankins being a prime example. From a production standpoint, linebacker Keith Kelsey looks like he could be another productive pro and a late-round steal.  Over the past two years, Kelsey has produced 199 tackles, 16.5 tackles for a loss and 4.5 sacks.  The issue with Kelsey is his limited physical traits. He has decent size for an inside linebacker (6’0″, 233 lbs) but like Vallejo, he might not have the quickness to be an asset in the coverage game. At the NFL Scouting Combine, Kelsey ran the 40 in a painfully slow 4.92 seconds.

Kelsey could be a real liability in coverage. His size makes it unlikely he would even be able to rotate in as an outside linebacker in New England’s 4-3 base look. There just doesn’t seem to be a realistic natural position for Kelsey in New England’s scheme, and he doesn’t appear to possess enough versatility to provide value as a role player.

Last week, the Lions hosted Northern Illinois wide receiver Kenny Golladay on a predraft visit, and they’ve worked out a host of other potential second- and third-day receivers, including Louisville’s Jamari Staples and Michigan’s Jehu Chesson (at their local day).

Devonte Fields evidently made big gains in both size and speed in the month since the NFL Scouting Combine.

Though the edge-rushing Louisville linebacker hadn’t heard an exact time for his 40-yard dash at U of L’s pro day on Thursday, some unofficial times recorded by various observers at the Trager Center had Fields running a sub-4.6-second 40. That would be a considerable improvement over the 4.72 that he ran a month ago at the NFL combine in Indianapolis.

Only two linebackers ran a sub-4.6 at the combine.

And Fields’ seemingly faster sprint on Thursday came while carrying considerably more weight than he did at the combine. There, the 6-foot-2 Fields weighed in at 236 pounds. At pro day, he said he weighed 248, which was closer to his playing weight at U of L. Fields said he had tried to lose some weight before the combine in hopes it would increase his speed. As it turned out, he was faster when he was bigger.

“My main goal (at pro day) was to improve my weight and my 40 time,” Fields said. “It shows I can still move with weight.”

Fields said he has his first private workout scheduled with the Cincinnati Bengals on April 5.

Broncos had issues against the run. Kyle Posey, with the site, thinks Brown can help fill that defensive role. At 6-foot 312 lbs, Brown might fall further (in the draft) because of his height.  But he is a smart, instinctive, powerful player.  Brown has some explosiveness off the ball that leads to him jolting offensive linemen.

Brown won’t offer much as a pass-rusher.  Maybe an occasional win with a first step bull-rush or arm-over. He’ll give you exactly what you need inside against the run though, which is exactly what Denver needs.

Once he saw how well-suited he was for the position, he began plotting a route to the draft. He transferred to City College of San Francisco for a season and earned an offer to play his final two years at Louisville.

When Cardinals coach Bobby Petrino paired him with Heisman Trophy quarterback Lamar Jackson, Hikutini’s career took off. He was an immediate contributor his first year and followed with a senior season that included 668 yards and eight touchdowns on 50 catches.

That production, combined with his 6-foot-4, 247-pound build, puts him in the mix as a late-round pick even with the injury. ESPN ranks him the ninth-best tight end in this year’s class, and draft site WalterFootball projects him going as soon as the fourth round. Miami would have to hope he sticks around deep into the fifth if it wants him.

A good portion of his pre-draft work was recovery oriented, but he did not need surgery on his knee and was able to start position-specific drills last month. He should be fully ready for rookie minicamp after the draft.

Once he arrives in the NFL, there’s little doubt he has the receiving skills to be an effective player in any team’s passing game after the way he played for Louisville last season, but he admits his blocking needs work. That’s something the Dolphins talked about when they sat down with him, and Fasano would be an ideal mentor.

“I definitely think I’m a better receiving tight end than a blocking tight end, but there’s room for improvement in both areas,” Hikutini said. “I need to learn blocking better. That’ll come with time and coaching.”

In his meeting with the Dolphins, most of the conversation centered on his ability to read coverages and diagram plays. There wasn’t much talk about how he’d fit with their long-term plans. Thomas is under contract for two years, and Fasano turns 33 this week. Beyond those two, the team doesn’t have any proven playmakers.

The reality for Radcliff could be not hearing his name called in this month’s NFL draft. The former Louisville running back was not invited to last month’s NFL combine in Indianapolis but by no means is he giving up hope on his prospects in professional football.

“It’s like a lottery pick, if you get it great.  If you don’t, you just got to go in and work yourself up.”

Which is exactly what the 5-9, 216 pounder has been doing. Recently, he worked out with both the Dolphins and the Chargers, giving them a taste of what he has to offer.

“The reason I feel I should be drafted is I’m a great player. I’m a hard worker. I put my all into it,” said Radcliff who later added, “I will not be stopped.”