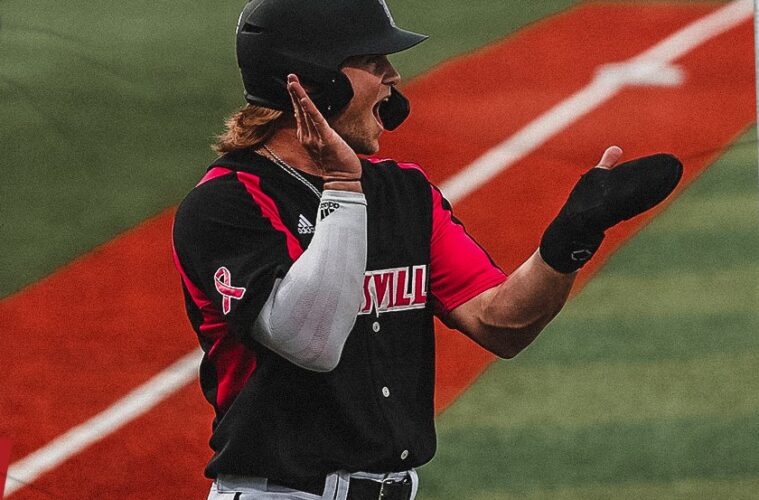 No.7 Louisville Baseball Gets Midweek Win Over Hilltoppers

No. 7 Louisville hosted Western Kentucky University for a Tuesday night matchup and came away with a 13-6 victory.

Both teams were off to a quick start when WKU plated two in the first and the Cards plated one. Luke Smith got the start on the mound and did not have his best showing posting a 4.15 ERA, giving up 1 hit and 2 runs through 3IP. The Cards would tally a hit in the bottom of the second inning but come up short and remain behind a run going into the third. The score remained the same through the third inning, as both teams would come up scoreless. Tulio was in to pitch for the fourth inning and would keep the Hilltoppers scoreless. Things started taking off for Louisville in the bottom of the fourth when Lucas Dunn had an RBI to send Binelas home and Metzinger sent Dunn across the plate. Barrett was on the mound for the fifth inning, and he gave up 1 hit and 1 run, which would tie the game at 3 apiece. The tie game didn’t stick around long when Louisville plated 3 in the bottom of the fifth and tacked on 3 more hits for the night. Tate Kuehner tossed a scoreless inning for the Cards in the bottom of the sixth and Cooper Bowman would add another run to the scoreboard with a homerun to left field.

Things got a little sketchy in the seventh inning for Louisville, who had three different pitchers on the mound. Facing a bases loaded situation Corbett was able to get the Cards out of the top of the seventh, but not before Louisville gave up 3 runs on just 1 hit. At this point Western was only behind Louisville by one run and work needed to be done by the offense. They did their job, and the bats were alive. Alex Binelas and Lucas Dunn had back-to-back triples adding another run to their lead. Cameron Masterman came through with an RBI to send Lucas Dunn home and putting Louisville ahead by 3 runs. Western went down in order during the top of the eighth inning, holding their run count steady at 6. Louisville would bust the game wide open when Alex Binelas stepped to the plate and cleared the loaded bases with his second triple of the night. The Cards had 5 hits and 4 runs during the bottom of the eighth giving Western Kentucky a slim chance to make a comeback. Glavan was on the mound for his debut and to close out an exciting game. He soon found himself with a bases loaded situation after striking out two batters early. Luckily, a fly out would end the game and Louisville would walk away with a 13-6 win.

The Cards will travel to Notre Dame this weekend for a three-game series, starting Friday. All three games will be broadcast on ACCNX. The games Saturday and Sunday can also be heard on 93.9 The Ville.