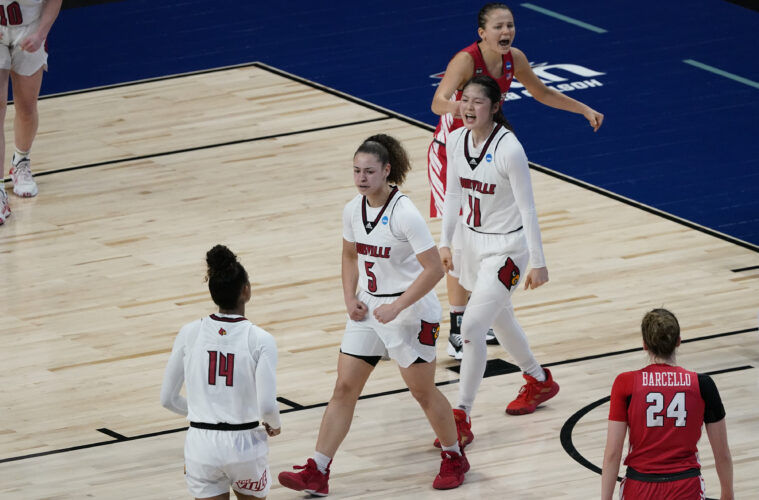 No. 2 Louisville Wins Big Against No. 15 Marist

The No. 2 seeded Louisville Cardinals played their first-round tournament game tonight and came away with a 31-point win over No. 15 Marist.

Louisville started the night off looking less than impressive and scoreless nearly four minutes into the game. Things were off to a very slow start for the Cards offense, who were shooting just 22% for 5 points at the first media timeout. They were missing too many easy shots and coming up short on second chance opportunities. Louisville ended the first quarter with just 12 points, shooting 26.7% and tallying 0 points in the paint. What they did have was three turnovers. Coach Walz was not a happy man and this team had room to improve if they were going to win this game. He wasn’t the only one out there showing a lot of frustration. Dana Evans was having a tough night and she knew it. With 4:55 left in the half, she only had 6 points and was shooting 28.5%. As a team, there was very poor ball movement and very little aggression. Something we aren’t used to seeing from this team. Even worse, they were just 5-10 on layups. Mykasa Robinson started to bring the hustle late in the second quarter coming up with a huge and 1 followed by big defensive plays. The Cards went on a 17-2 run and would get their first lead of the game in the second half.

Louisville took their lead and never looked back. The grabbed hold of a 20-point advantage in the third quarter and did a lot of their work without Dana Evans on the court. Applying boot to Marist neck, six different Cardinals scored in the third quarter and Mykasa Robinson was bringing all the heat. She tallied 4 points, 2 rebounds, and 3 assists in those ten minutes of play. Hailey Van Lith found some heat too. She ended her night with 17 points, 1 rebound, 4 assists, and 1 steal. The defense really found its footing and by the final buzzer the Cards had forced 22 Marist turnovers and racked up 31 defensive boards. Once they gained their momentum right before the halftime break, they didn’t slow down. As a team they were shooting 44.4% and they were 100% from the free throw line.

After the game, Hailey Van Lith said this was a great game for everyone on the team. She also stated that they obviously had a lot of overall excitement early in the game and they were able to get things under control for the second half. She also noted that turning up the defense and getting easy layups made the game fun for the team.

During the postgame interview, Coach Jeff Walz said it got to a point where he had to switch something up, so he went with five guards and pressed. He thinks the team had some jitters early in the game tonight and notes that defensively, things weren’t that bad. Coach Walz, in regards to Dana Evans sitting on the bench during the third quarter, saw the rest of the team playing well so he just let it roll.

The 74-43 win advances the Cards to a Wednesday game against No. 7 Northwestern.