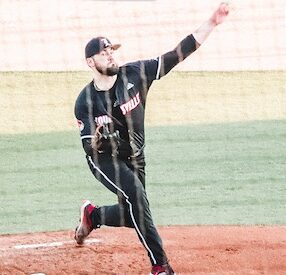 The No. 7 Louisville Cardinals swept their series at NC State over the weekend. They were nothing short of dominate Friday night putting the Wolfpack to rest with a 13-1 victory. The Cards secured the series win Saturday with the 6-3 advantage and put the nail in the coffin Sunday with an 8-3 victory.

Henry Davis had the Louisville offense going early when he launched a two-run home run during the first inning. During the second inning, he stepped to the plate with the bases loaded and sent three home on an RBI double. He finished the night with a career-high 5 RBI. Michael Kirian was nothing but impressive in his start Friday evening. When he stepped to the mound, he retired the first 11 batters he faced and held onto a no-hitter into the eighth inning. He finished his night allowing just one run on two hits, striking out a career high 13 batters. This secured Kirian’s fourth win.

Lucas Dunn would be the Cardinal who got things going on Saturday afternoon when he hit a line drive to right field for a sacrifice fly. Christian Knapczyk followed with a single that would send Levi Usher across home plate and giving the Cards the 2-0 lead. Cameron Masterman came through in the ninth inning with an RBI double, giving Louisville a little bit of insurance. Glenn Albanese is now 3-0 after he allowed just two runs on five hits and struck out three. Kaleb Corbett had two scoreless innings and three strikeouts for his third save of the year.

Things got off to a tough start Sunday when Louisville found themselves behind the Wolfpack 3-1 going into the seventh inning. The offense finally started to find its way when Alex Binelas hit one off the scoreboard cutting the Louisville deficit in half and things never slowed down after that. Henry Davis delivered a two-run double that would be followed by Binelas and Trey Leonard adding runs of their own. The win went to Adam Elliott today who had 2.1 scoreless innings coming out of the bullpen. Henry Davis extended his hitting streak to 21 games, which has him tied for second longest hitting streak in Louisville history.

The Cards have now won six consecutive ACC series. It is the first time they have swept consecutive ACC series since 2018 when they swept Pitt and Notre Dame in the final two series of the season. Louisville is scheduled to host Western Kentucky University for a midweek matchup this Tuesday at 6:00.