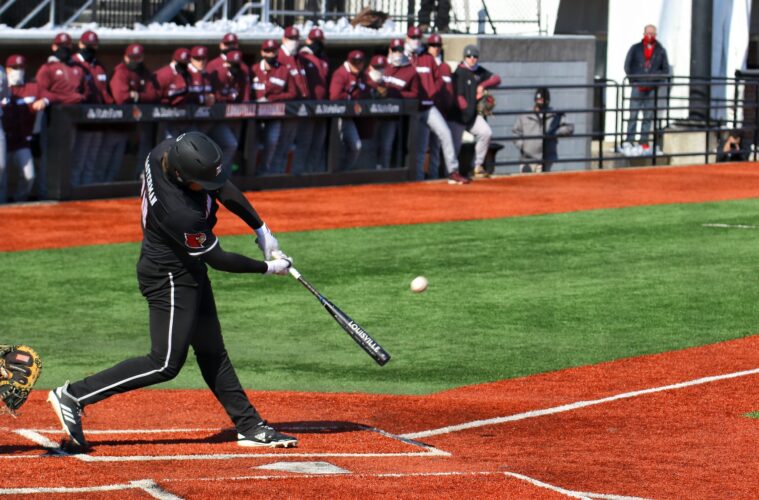 It was opening day at Jim Patterson Stadium and the No. 3 Cardinals had not stepped on the field for a game in 346 days. If you are a baseball junkie like me, this wait, and anticipation was hard to deal with. When the Cardinal Nine took the field this afternoon, everything felt right, and they would soon prove they were on a mission with a chip on their shoulders.

Glenn Albanese got the start for the Cards today and recorded his first strikeout of the season when he faced the first batter. He would give up an RBI double in the top of the first which allowed Bellarmine to score their first run of the day. Alex Binelas and Lucas Dunn were able to connect at third base to get the Cards second out of the day before Albanese would get his second strikeout to end the top on the first inning. Luke Brown would lead off for the Cards in the bottom of the first and drew a quick walk before making it to second base off a wild pitch and then a stolen base to get to third. Henry Davis hit a grounder to third that would send Luke Brown home to even out the score heading into the second inning. Albanese would have a perfect second sending the Knights down in order. Cameron Masterman recorded Louisville’s first homerun of the year when he sent a bomb to left field and put the team ahead 2-1. The lead would be extended when Dalton Rushing hit one out of the park for back-to-back homeruns from the Cards and then again when Tim Borden hit an RBI single to send Trey Leonard home.

The bottom of the third ended scoreless for Bellarmine after a double play from the Cards, who gave up a couple of base runs. The top of the third did not fare well for the Cards either, who would go down in order, but keeping their 4-1 lead. Albanese continued to collect strikeouts through the fourth inning, sending Bellarmine down in order and all three batters striking out while swinging. The Cards loaded the bases in the bottom of the fourth with one out when Lucas Dunn was able to drive Dalton Rushing home with a sacrifice fly to centerfield.  Albanese added one more strikeout to his count in the top of the fifth inning before Bellarmine sent one deep to left field. A beautiful catch and throw from Masterman would set up the double play to get the final two outs needed. Henry Davis started Louisville off with a base hit in the bottom of the fifth before being thrown out at second after a single straight to the mound by Masterman. Louisville had runners on first and second with two outs when Trey Leonard grounded out to keep the Cards scoreless in the fifth inning.

Albanese finished his day with 5IP, 7 K’s, 4 hits, and 1 error before Tate Kuehner stepped to the mound to start the sixth inning for the Cards. He would record his first two strikeouts of the season while facing four batters. Tim Borden went to the plate to kick off the bottom of the sixth for Louisville and with a full count almost had one out of the park in left field. I will be honest; the entire press box missed the rest of the inning after that due to a bird who made its way inside. Cam Teague and I tried our best to fight it off with our laptops before Michael McCammon opened the window to let it out. No worries, Matt McGavic recorded the entire thing. I will include it at the end of this story for your viewing pleasure. What we do know, is Louisville would go scoreless during the inning. Bellarmine came up short in the top of the seventh and Kuehner was finding his groove early in the season. Cameron Masterman came up with a single in the bottom of the seventh and the Cards had two outs on the board when Dalton Rushing hit a pop fly to the outfield for Louisville’s third out.

Jared Poland would see his first visit to the mound at the beginning of the eighth inning and face four batters before Bellarmine tallied three outs. Louisville also had a scoreless inning in the eighth finishing their day at 5 runs. Kaleb Corbett entered the game at the top of the ninth to close out the game for Louisville. He finished things off with two strikeouts through three batters faced.

The Cards will continue their series against Bellarmine tomorrow with a double header set to begin at noon. Both games will be streamed on ACCNX or you can listen to our beloved Sean Moth call the game on 93.9 The Ville.