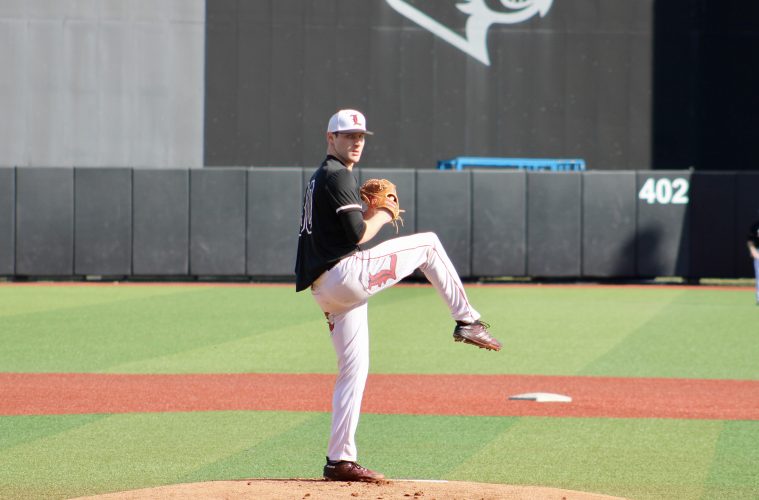 For the second year in a row the Cardinal Nine have started the season 1-2. If this were any other sport I might panic and wonder why the team lost two of their first three games. So why am I not panicking?

Friday night we welcomed our ace, Reid Detmers, back to the mound. To my surprise, he looked a little shaky coming out of the gate. Typically he is someone that throws a pitch with pure confidence so I was less surprised that he went on to strike out nine batters while only allowing one run over five innings. The first inning presented the Cards with the opportunity for some big time scoring but unfortunately the third strike came leaving three runners stranded. This game felt like a battle of the pitchers until the fourth inning when Ole Miss finally plated a run. It didn’t take Louisville long to answer when Britton hit a two run double to put the Cards up 2-1. The bats really came alive this inning where we saw an RBI from Henry Davis, and an RBI double from Justin Lavey. Reid finished his night with 5 innings pitched, 9 strikeouts, and only one error. Adam Elliot may have only seen the mound for 2.1 innings but we saw a decent game from him with two strikeouts and giving up only one run. By the 8th inning it was 4-2 and the Rebels had a real chance to make a comeback in this game. Unfortunately for them, the Cards run three more in during the 9th sealing the deal and Kirian striking out 3 batters. The Cardinal Nine took game one 7-2 and had the momentum going into Saturday.

Four batters into the bottom of the first inning, Ole Miss had already plated three runs. This wasn’t the start Bobby Miller and the rest of the team had hoped for. We saw a glimmer of hope in the second when Britton and Davis showed up with back-to-back doubles. It felt like this game sat at 3-1, Rebels, for a very long time but an RBI double from Henry Davis in the fourth cut the lead for Ole Miss and Benefield sent Usher home to tie the game 3-3 in the fifth. Bobby Miller finished his day with 4 IP and 5 strikeouts. Michael Prosecky was at the mound for the following two innings giving up two runs and the tie. I’ll also take the blame for some of this… I moved from my designated game watching spot to make a cup of coffee. It won’t happen again, I promise. The game was tied 5-5 in the 7th inning before Ole Miss was able to tack on three more runs making it 8-5. The eighth was scoreless for both teams and the sense of urgency kicked in for Louisville. It’s not uncommon for Dan’s teams to make a big come back at the end of a game but Saturday wouldn’t be that day. Danny Oriente smacked his first home run of the season straight out to the left field berm but it wouldn’t be enough to get the win. Game two went to Ole Miss with a final score of 8-6.

You always want to go into Sunday with the series clinched. That’s ideal. But, Louisville would be faced with a rubber match against Ole Miss. This is the day we’d go deep into the bullpen and come out with our first series loss of 2020. Louisville was able to get a run in the first inning and Luke Smith had himself a day striking out 8 batters through 5 innings. The fifth inning is when things started to change in this game. Louisville was able to add two more to the scoreboard but they also gave up two. Each team also added one to the board in the sixth inning when Tate Kuehner was on the mound. After this, I’m certain all hell broke loose. Louisville would send four more pitchers to the mound including Ryan Hawks, Adam Elliott, Glenn Albanese, and Kellan Tulio. After giving up 4 runs in the seventh inning Louisville was able to get within reaching distance of a win in the ninth plating two runs of their own. At the end of the day Louisville would be one run short of a Sunday win.

The Cardinal Nine will play their home opener on Wednesday, February 19 at 3pm vs. Wright State. This game is free to attend and will also be shown on ACCN.