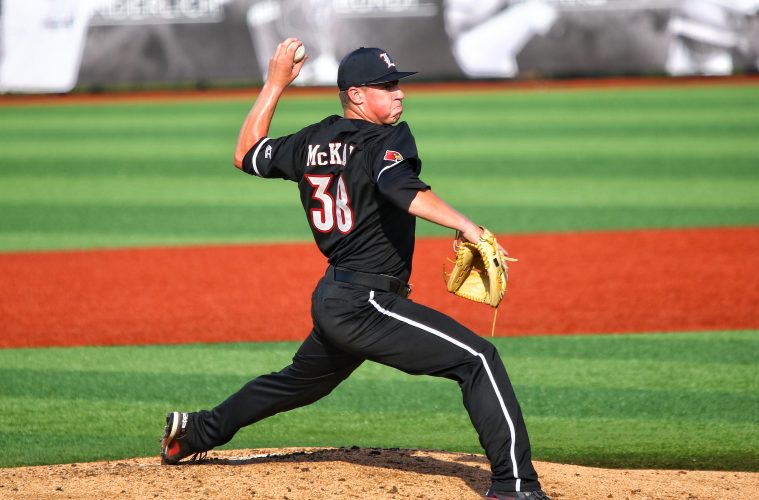 Monday’s announcement marked the third straight season the Cardinals have received at least two of the ACC’s major individual honors and it is the ninth time in the last 11 seasons Louisville has claimed a conference Player or Pitcher of the Year award. McKay adds the prestigious Player of the Year honor to his 2015 Freshman of the Year award while also being tabbed as an All-ACC First Team selection as both a starting pitcher and designated hitter/utility player. McDonnell becomes the first skipper in ACC history to receive three consecutive Coach of the Year honors.

A native of Darlington, Pennsylvania, McKay has led the Cardinals to the No. 1 seed in this week’s ACC Baseball Championship by ranking among the league’s leading hitters with a .361 batting average, 15 home runs and 47 RBI. On the mound, McKay owns an 8-3 record with a 2.22 ERA that ranks third among conference hurlers. His 116 strikeouts in 85 innings pitched leads the ACC.

Hairston’s play at shortstop has loomed big for Louisville, as he has posted a sparkling .990 fielding percentage with just two errors in 209 chances. He has registered 75 putouts to go with 132 assists and has had a hand in turning 22 double plays. The Lexington, Kentucky native also has a .314 batting average with three home runs and 47 RBI while starting all 55 games this season.

McDonnell was again voted ACC Coach of the Year by his peers after guiding the Cardinals to a 46-9 overall regular-season mark, a 23-6 record in ACC play and a top-five national ranking throughout the season. McDonnell earned his 500th victory as a collegiate head coach on May 12, and Louisville has averaged more than 45 wins per year in his 11 seasons with the program.

Ellis leads the ACC in slugging percentage (.737), ranks second in batting average (.387) and on-base percentage (.481), third in home runs (15), seventh in doubles (18) and ninth in RBI (51) while starting all 55 games for Louisville. The Jeffersonville, Indiana native was selected as the National Player of the Month in April by the National Collegiate Baseball Writers Association after hitting .455 (30-for-66) in 19 games with five doubles, one triple and eight homers, 22 RBI and a .532 on-base percentage.

Henzman leads the nation with 16 saves to go with a 2-0 record, 1.16 ERA and 32 strikeouts in 31.0 innings pitched and 22 total relief appearances. Thirteen of the Lexington, Kentucky native’s 16 saves came against ACC foes, while opposing hitters are batting just .146 against him this season.

A native of Rocheport, Missouri, Fitch connected for 11 home runs, 11 doubles and 40 RBI while hitting .262 in 54 starts this season. Bennett, who hails from Cincinnati, accumulated a 5-0 record with a 2.47 ERA and 55 strikeouts in 58.1 innings and 13 total appearances, including 11 weekend starts.

Top-seeded Louisville will open its Pool A schedule at the 2017 ACC Championship against No. 12 Notre Dame on Thursday at 7 p.m., ET at Louisville Slugger Field. The Cardinals will close their preliminary slate against No. 8 Florida State on Friday at 3 p.m.