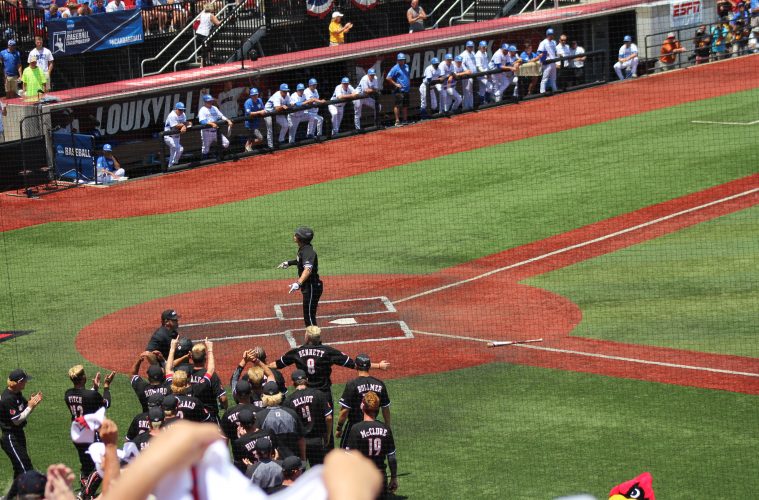 The University of Louisville athletics department is committed to providing the best fans with the best college baseball experience. With unprecedented access to the nationally-ranked Cardinals, UofL will introduce reserved chairback seating at Jim Patterson Stadium for the first time starting with the 2018 season.

Season ticket packages and other great promotional offers are on the way as fans will be able to secure their individual seat throughout the season and enjoy the great benefits of being a Louisville Cardinals season-ticket member. Combining one of the nation’s most passionate fan bases with college baseball’s newest perineal powerhouse, Jim Patterson Stadium has been packed with overflow crowds and record-breaking attendance during the past decade. With a listed capacity of 4,000, the stadium has hosted six crowds of more than 6,000 fans in the last two seasons including three in 2017. Fresh off a fourth trip to the NCAA Men’s College World Series and third straight ACC Atlantic Division Championship, Louisville baseball has become the must-see event for Cardinals fans in the spring.

“Many of our terrific fans have wanted to have a reserved seat in Jim Patterson Stadium for years and now that will be possible with affordable pricing. Until now, I had been hesitant to sell tickets, as I wanted to reward the neighborhood and our fans for the last 12 years,” said Tom Jurich, UofL Vice President and Director of Athletics. “We will continue to have multiple promotions and special concession offerings that have led to a fun, family environment to watch our highly successful baseball team. We are in the early stages of planning a major expansion project for the stadium that will make it even better for all.”

Season-long packages will include a reserved chairback seat for each regular season home game of the baseball season. Season passes are expected to be offered for as low as $150 – saving fans almost double off the single-game price. Season packages will exclude the program’s annual Elementary School Day held in March during a weekday afternoon. Single-game tickets will begin at $10. UofL students will receive free admission by showing a student ID. Additional ticket information will be distributed this summer.

“The fans have played an integral role in the tremendous home field advantage and electric atmosphere inside Jim Patterson Stadium on game days,” said Louisville head coach Dan McDonnell. “The community support for our baseball program is special and we’re excited to see this type of demand for reserved seating.”

This summer, the ticket process will begin with a pre-sale opportunity for fans who have shown a history of support to the baseball program including Dugout Club members, Cardinal Athletic Fund members, and season-ticket holders of other Louisville sports programs. Any fans who qualify for the pre-sale opportunity will receive an email today with details on that process. Following the pre-sale, ticket packages (offered for less than $5 per seat, per game) will be available to all on a first-come, first-serve basis. Fans will be encouraged to get groups of friends and family together for their seating options and accommodations will be made via a “sit-together form”.