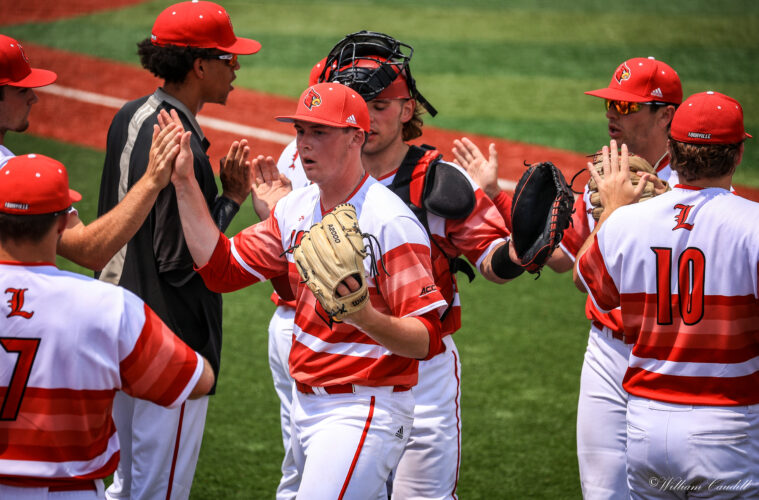 The seventh-ranked University of Louisville baseball team had a banner day on Saturday, claiming an 11-3 victory over No. 10 Virginia to wrap up the regular season at Jim Patterson Stadium.

Louisville wrapped up the regular season at 38-16-1 overall and 18-11-1 in the ACC. By virtue of Notre Dame’s loss to Miami on Saturday, the Cards claimed the top spot in the ACC Atlantic Division, capturing the program’s fifth conference title in seven full seasons as members of the league.

The Cardinals will be the No. 2 seed in next week’s ACC Championship, with the pools and schedule still to be announced.

Louisville jumped on the board right off the bat on Saturday, getting a two-out, two-run single from Levi Usher in the bottom of the first inning.

One inning later, Ben Bianco singled home Isaac Humphrey and Ben Metzinger launched his 17th home run of the season to stretch the lead to five. Two batters later, Jack Payton homered for the fourth time this spring to make it 6-0 after two.

Louisville’s lead stretched to seven with a Noah Smith sacrifice fly in the fifth and the Cards would hold the 7-0 lead until the seventh.

Virginia (38-15, 17-13) picked up a pair of runs in the seventh, but Ryan Hawks picked up a big strikeout to stop the comeback effort.

Humphrey hit a towering solo homer in the seventh, and Metzinger plated a run in the eighth with a run-scoring double. Dalton Rushing then capped off the day with a two-run homer to straightaway centerfield for his 19th of his junior campaign.

Carson Liggett (2-0) pitched two scoreless innings to pick up Saturday’s win. Tate Kuehner recorded four scoreless frames before having two runs come across in his fifth inning on the mound. Michael Prosecky closed out the game with a perfect ninth.

Metzinger was 3-for-5 with three RBIs, while Humphrey was 3-for-4 with three runs scored. Rushing, Payton and Bianco all have two hits.