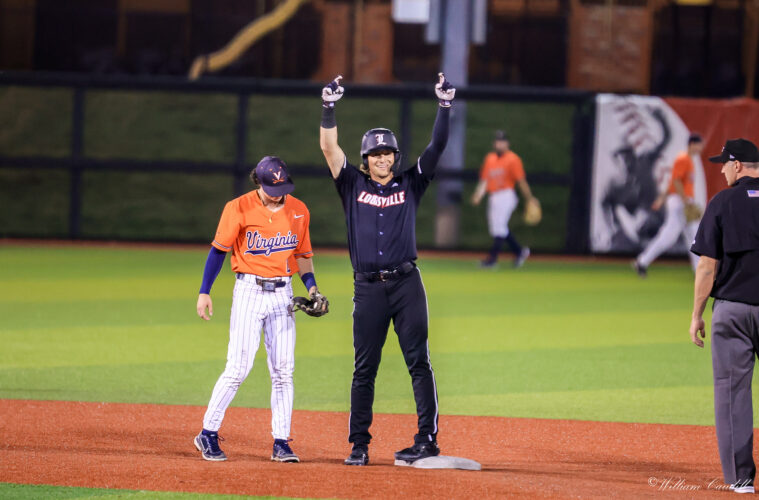 The seventh-ranked University of Louisville baseball team battled weather delays but came out victories 4-1 over No. 10 Virginia on Thursday at Jim Patterson Stadium.

Thursday’s contest was delayed for nearly five hours due to inclement weather in the area, but finally got going just before 9 p.m. ET.

The Cardinals got the offense rolling quickly Thursday, with Dalton Rushing doubling into the left-centerfield gap to score Ben Metzinger in the bottom of the first. Jack Payton then singled on the next pitch to bring Rushing across to double the margin.

Jared Poland moved quickly through the second inning and Mother Nature showed up again in the bottom half of the inning. The two teams sat for 53 minutes of a lightning delay before resuming and Metzinger drove in Isaac Humphrey to make it 3-0.

The three runs would be more than enough for Poland (5-3), who allowed just one run on two hits over seven innings. The right-hander added eight strikeouts before handing the ball off to Michael Prosecky. The Louisville closer handled the rest, recording the final six outs for his 10th save of the season.

Rushing and Payton each had two hits on the night to lead the Cardinals.

The final regular season series continues on Friday with first pitch scheduled for 4 p.m. ET. Friday’s game will be televised on the ACC Network.